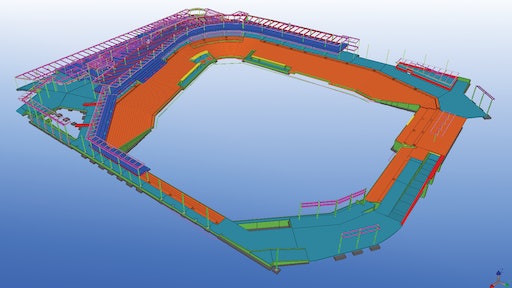 Firmly believing in the value of technology to help it deliver higher quality, better coordinated work, Wayne Brothers began looking at 3D modeling software as a way to reduce risk even further by enabling them to respond quicker to client demands, see concrete and rebar details not visible on 2D drawings, and identify potential issues such as omission and errors in design. In May 2012, the company adopted Tekla Structures.

Wayne Brothers calls its program Wayne Brothers Information Modeling, or WBIM. For them, WBIM is more than just using software to supplement existing processes; it is a program that helps them operate their business more efficiently.

“We use Tekla not just to address one little problem but actually embed it into our business to make our business better,” says Daniel Wayne, Wayne Brothers’ director of technology. “This piece of software simply lets us be more successful in this highly competitive concrete market."

Unlike many construction companies who adopt modeling to create pretty 3D pictures for sales presentations, Wayne Brothers took it straight into operations, building models for existing projects, before using it to win business.

“We first applied Tekla to operations because we knew that would be the area of our business where it would produce the most value,” Wayne explains. "After that, we started modeling projects to help win business, which is very effective especially with complex industrial structures with tight schedules. Showing a prospective client their project in 3D is a powerful statement and shows them that we have already got it figured out.”

Going beyond simply modeling its portion of a project, Wayne Brothers is taking its role a step further to identify potential issues during the preconstruction and preplanning stages — well before construction begins — in an effort to reduce waste and avoid time delays and cost overruns. Instead of only looking for conflicts in the concrete and rebar, Wayne Brothers compares the models for the entire project. Tekla supports a wide range of file types, which allows Wayne Brothers to easily import and export models and information created in other BIM (Building Information Modeling) and CAD applications. By the time construction starts, the model has been checked by the designer and all of the trades several times, resulting in a high level of confidence that all of the pieces are going to fit together.

“Combining the models improves the level of collaboration between us, the client and the other subcontractors,” said Wayne. “This allows us to add value to the owner by keeping the project cost down and allowing us to contribute to constructing a higher quality building in less time.”

“There’s a real benefit of putting intelligent information into the model,” says Ryan Barker, CM-BIM, Wayne Brothers’ BIM manager. “If you take the time to make it right in the model, you can automate other processes. Tekla is the only software that includes the breadth of structural components we need to build accurate project models with the highest level of detail exactly as they are shown on the plans.”

Like most concrete contractors, Wayne Brothers has to move fast. It’s not unusual to be asked to be on the jobsite ready to go within two to three weeks of winning a contract. That means getting a vendor on board to detail the rebar, have it approved by the engineer, and get the rebar cut and delivered to the jobsite. With the traditional preplanning and submittal for approval process using 2D drawings, it’s virtually impossible to move that quickly and be accurate because it takes longer to detail and review the rebar.

“With Tekla, we’ve reduced the time from the award to the first rebar submittal by 50 percent, allowing us to meet the most demanding schedules,” Wayne says. “This gives us a clear competitive edge because we can respond quicker with more accuracy and provide a higher level of support to our clients.”

“You can see much more detail in 3D than you can in 2D,” Wayne says. “A project manager or project engineer can stare at 2D drawing sheets for weeks and still not have as thorough of an understanding as is possible after just 15 minutes of looking at the model. Modeling in 3D allows us to clearly see even the smallest details, giving us a much better idea of the design intent of the building and how to approach the project.”

It’s simple. Wherever there’s a problem — something’s not constructible or elements are occupying the same space — Wayne Brothers flags that part of the model in red to signal a potential problem to the client, field team and other trades.

Taking it to the field

Since its inception, the Wayne Brothers 3D modeling program has focused on bringing the Tekla model and its information to the field. Once they have modeled all of the concrete on a project in Tekla Structures, down to the small details, such as pour breaks, column isolations, turn downs, anchor bolts, layout points, as well as rebar, the model is exported to Tekla BIMsight and organized by building and object types to make it easy to navigate. The Tekla BIMsight package is saved to the company server, where the project team in the field access it but not alter it, protecting the master model. Users with very little modeling experience can view the model to visualize the project and use it for coordination and collaboration.

“We have found real advantages in putting the model into the hands of our site staff,” Barker says. “The field model is used for pour planning, progress tracking, coordination and safety planning. Any user of the Tekla BIMsight model has the ability to add their input and save it for all to access.”

Wayne Brothers now works very closely with rebar fabricators that are using Tekla’s advanced rebar detailing capabilities to model each piece of rebar at its exact size and bends and create a bar list. This information is exported to fabrication software to cut and size rebar to the exact measurements. Tekla also allows them to organize the rebar to manage the flow of material to the jobsite.

“By sharing models with the rebar detailer, we can review their work in 3D to resolve areas of congestion before construction begins and see exactly what it will look like in the field,” Barker explains. “Tekla substantially reduces our review time and the number of mistakes due to detailing errors.”

Tekla also helps Wayne Brothers reduce rebar waste to support their sustainability mission. During the first project modeled in Tekla — a 1 million-square-foot industrial complex — 99 percent of the rebar was fabricated correctly; meaning only four of the 2,500 tons of rebar needed for the job was misfabricated. And because the Tekla model was so accurate, Wayne Brothers was able to pass these savings on to the owner.

“With Tekla, detailing and ordering rebar is a more exact science,” Wayne says. “With 2D drawings, 10 to 20 percent of the rebar was typically fabricated wrong. From the first project, we saw a dramatic improvement in the detailing workflow, from more accurate reviews to fewer fabrication errors. The same applies to concrete pours. We can reduce waste by quantifying exactly how much concrete we need by pulling the information straight from the Tekla model in BIMsight and knowing exactly where to put it.”

Tekla allows Wayne Brothers to collaborate, coordinate and execute projects more effectively and efficiently by providing a single source of project information that can be used throughout the project’s lifecycle. The time saved as a result of good planning and coordination is spent on quality control in the field and in the office. This aids the company in its mission to provide a top quality product with service to match.

“Using Tekla was a business decision,” Wayne says. “We have come to value the WBIM program and this software the same way we value the best truck or excavator.”

What the Heck is BIM? And What Can It Actually Do?

31% of Contractors Forecast Rising BIM Use this Year