Wide Spacing is No Road Block for Dowel Drills 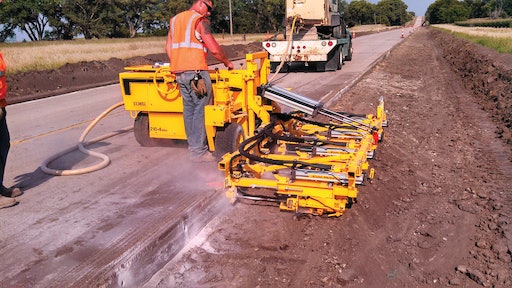 The E-Z Drill 210-4SRA 4-gang Slab Rider was modified to achieve a maximum of 33-in. spacing for drilling tie bar holes along the shoulder of Nebraska 92. The modified drill doubled Chester Boss' drilling productivity over the 2-gang models.

Nebraska 92 stretches from the state’s western border with Wyoming to Omaha, where the highway leaves Nebraska and enters Iowa, taking motorists through farmland and several towns and counties across the state. It’s also a major roadway that branches off of Interstate 80 and leads motorists through Polk County, NE.

Like many two-lane highways in agricultural areas, Nebraska 92 in Polk County is traveled by more than just cars, minivans, SUVs and the occasional semi. It’s also a road that sees a lot of tractor traffic. Most tractors didn’t fit within the road’s 11-ft.-wide lanes, so farmers drove along the shoulder, which was made up of compacted dirt and aggregate. The tractors caused considerable damage and created an uneven surface, which was a serious safety hazard for motorists. In addition, the surface of the road itself was excessively worn and had started to show major irregularities.

In May of 2013, the Nebraska Department of Roads (NDOR) initiated a resurfacing, restoration and refurbishing project of the Nebraska 92. In addition to making the roadway safer, the project was intended to reduce maintenance costs associated with maintaining the highway’s earth shoulder. It included diamond grinding the surface of the road, replacing areas of the road that had suffered excessive wear and paving the highway’s earth shoulders, which required over 40,000 doweling holes that had to be spaced twice as far apart than normal.

The Polk County project sought to replace 21.6 miles of the earth shoulder with concrete and increase the width of each lane to 12 feet to provide adequate stable area for tractors and increase safety for everyone on the road. Chester Bross Construction was charged with replacing 5,427 sq. yds. of pavement that had settled excessively, as well.

The crew had to perform the grading, culvert, paving and guardrail work within 160 days. All that new concrete meant a lot of tie bars and a lot of dowel drilling. The Chester Bross crew of 16 had to drill a total of 40,492 holes to 9 in. deep in order to tie 18-in. rebar into the existing concrete.

Because the shoulder is far less traveled than the main roadway, it required less reinforcement from tie bars, so holes could be spaced every 33 in., 21 in.wider than typical roadway projects. While this reduced costs and the number of holes by 65,000, it created a challenge for Chester Bross Construction, since the company’s drills could only achieve a maximum of 30-in. spacing.

“This is a fast pace for this type of work, which created a challenge to get the project done in the timeframe with the equipment we had,” says Tim Bennett, operations manager for Chester Bross Construction.

In addition, the crew could only work on two miles of road at a time. While this is normal for most two-lane road projects, it added to the challenge. It didn’t allow the crew to drill all the holes for the project before pouring concrete, which would have been most efficient. The crew had to take each two-mile section from start to finish before moving on to the next. The company had to make sure its equipment was up for the task.

At the time, Chester Bross Construction already had several E-Z Drill concrete dowel drill models, including two 2-gang and several single drills. The company considered modifying its two 2-gang drills for 33-in. spacing, but that wouldn’t give them optimal efficiency. It would take over double the time to reposition one drill as opposed to the possibility of repositioning just one drill that could accomplish several holes at once.

For this project, Chester Bross needed a fast and efficient drill that would allow it to drill more holes at a time without pulling some all-nighters to get it done before the deadline. Bennett decided it was time for a new drill. He contacted equipment dealer Cummings, McGowan and West in St. Louis, MO, to see what it had to offer.

Chester Bross had already purchased several of its E-Z Drills from the store, so Bennett worked with Cummings salesman Dan Doherty on a solution. “After briefly talking with Tim about his situation, I knew his best option would be at least a 4-gang drill that is modified to meet the spacing requirements,” Doherty says. He contacted Randy Stevens, vice president of sales at E-Z Drill to see what could be done.

“We come across many of these situations that challenge our customers’ efficiency,” says Stevens. “Having the extra gangs and the right configurations can be the difference between finishing a project and finishing it on time.”

To keep Bennett and his team on track, Stevens recommended the 210-4SRA 4-gang Slab Rider, which could be modified to achieve a maximum of 33-in. spacing. In addition to drilling four holes at once, the drill auto-aligns and quickly repositions itself after each set, which helped the team work quickly and efficiently. It is also adjustable so that once the project was completed, Chester Bross could use it for more typical projects that require less spacing. In addition, the drill can be configured to drill vertically for high curbs and barrier walls.

Work on Nebraska 92 began on June 1, 2013, with Chester Bross opening up the first two-mile stretch on the west end near the Platte River.

“Once we prepared the subgrade on two miles, it was critical we got the drilling done as fast as possible,” says Bennett. “The new drill doubled our productivity from what we would have experienced with our 2-gang models, and that allowed us to stay on track and meet the deadline.”

Bennett also notes the crew didn’t have to spend time repairing areas of road that suffered inadvertent damage, or perform maintenance on the drill. “We worked six days a week, so to have a drill with no downtime really optimized our time,” he says. “And since the drill gathers its point of reference from the top of the concrete slab, it didn’t disturb the subgrade and provided accurate measurements between holes.”

As the drilling and shoulder work progressed east, Chester Bross also replaced 11 areas of severely settled concrete. The company used its 210B SRA single-gang model to drill 242 holes into the existing concrete slab for the tie bars.

Having the appropriate drills for the task enabled Chester Bross to wrap up the project in late October 2013, right on time. “Hitting the deadline is important for every project, but it was especially important for this one,” says Bennett. “That’s why we have used E-Z Drills for the past 15 years.”