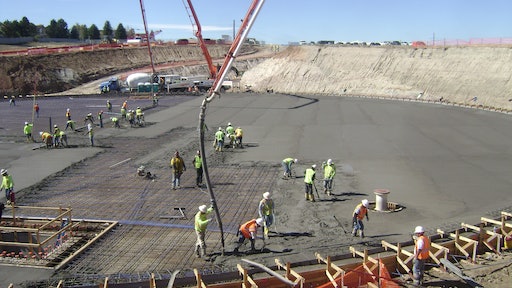 Everyone knows water is a valuable resource for all living things, but it has also proven itself to be highly useful in improving the quality, durability and longevity of concrete construction projects.

Having been approved a year and a half ago, the ASTM standard has resulted in numerous new concrete projects specifying the use of internally cured (IC) concrete. Notwithstanding, since 2003, more than 2 million cu. yd. of internally-cured normal weight concrete, including 1.3 million cu. yd. in low-slump pavements, have been placed. Projects using high-performance concrete are benefiting from internal curing as well.

Speck chaired the ASTM Subcommittee C09.21 on Lightweight Aggregates and Lightweight Concrete, which was tasked with drafting the standard.

The benefits are evidenced by Colorado engineers’ successful water tank installation for Denver Water in 2012, as well as three additional tank installation projects using IC concrete on the schedule for 2014.

Getting the job done

Denver Water, a public utility company that serves high-quality water and promotes its efficient use to 1.3 million people in the city of Denver and many surrounding suburbs, planned construction of a second water tank in the southern suburb of Lone Tree by 2012. The water system was developed in the 1980s. The site had been originally planned for two 10 million-gal. water tanks, but scaled into construction with the placement of only one tank. With a growing population in the area, Denver Water began planning in 2010 to install the second tank.

The construction site was in the middle of a new residential neighborhood, in close proximity to an elementary school. Because of this, the city placed restrictions on the job, specifying that the construction crew could not have trucks delivering materials to the site during hours just before or after school. Normal construction hours were permitted, 7 a.m. to 5 p.m.

“The water tank’s floor and roof slabs had to be placed monolithically,” says Erik Holck, Denver Water’s construction engineering manager of the infrastructure group. “Once we started pouring them, we couldn’t stop because we did not want joints in the slabs that are prone to leaking. Because of the delivery restrictions, we had to place them during weekend hours.”

Denver Water had selected Bates Engineering to design the tank, but Holck says he was previously familiar with the concept of using lightweight aggregate in internal curing of concrete, so he proposed the idea to the engineering firm.

“The benefit of internal curing using lightweight aggregate includes a reduction in shrinkage, cracking and provides a higher percentage of cement hydration” Holck says. “Over the years, state-of-the-art designs have reduced the water to cement (w/cm) ratio. As we’ve done that, it has produced other problems.”

He found that it became more difficult to place concrete slabs without issues arising. “Colorado is unique in that we have cold winters and hot, dry summers. Both make concrete installation more challenging,” he says. “My goal was to raise the water to cement ratio with an internally cured mixture, so the concrete construction company would have an easier time placing the slab.”

Internal curing provides a supply of moisture from within the concrete, for the development of cement hydration with age. Through the use of pre-moistened lightweight, porous aggregate, which replaces some of the conventional aggregate in the mixture, a high relative humidity can be maintained within the pore structure of the concrete, extending hydration and increasing strength and durability performance.

According to Speck, the lightweight aggregate particles release moisture as necessary, increasing hydration of cementitious materials throughout the concrete over time, reducing shrinkage and warping of concrete. His ASTM Subcommittee on the topic found this lowers concrete permeability, making it more resistant to chloride penetration. Because the internal curing water is absorbed in the lightweight aggregate, it is not part of the mixing water and does not affect the w/cm ratio.

“Even distribution of additional water sources within concrete leads to greater uniformity of moisture throughout the thickness of the concrete, and reduces internal stresses due to differential drying,” Speck adds.

While drying shrinkage may not be completely prevented long-term, delayed drying will allow the mixture to gain strength and help resist associated stresses.

Bates Engineering’s staff engineer, who had retired from the Colorado Bureau of Reclamation, asked about the drawbacks and what was needed to see if internal curing using lightweight aggregate would be appropriate for the post-tensioned tank.

“We contacted three concrete suppliers in town to see if they had any interest in doing some free preliminary work with a trial mixture,” Holck says. “Aggregate Industries and Trinity Lightweight, a supplier of lightweight aggregate, came forward in partnership. We ran a series of trials and a testing program, in which we ran all lightweight aggregate mixtures through to see if they were viable for the tank. Ultimately, we found that a 0.40 w/cm mixture was viable and exceeded the strength requirements of 4,500 psi at 28 days.”

The construction contractor, Garney Construction, wanted to use IC concrete for the two large vaults that would sit under the water tank, to see how it worked. Denver Water did more testing for slump, air and strength on the mixture. “The 28-day strength was much higher than expected or needed,” Holck says.

“Because the mixture was over-performing strength-wise, the design team decided to relax the w/cm ratio to 0.42, which is in a range that makes the finishing easier than where we had been for previous tanks,” he says.

The floor of the vault used a 0.40 w/cm, and 10 days later, Garney placed the vault walls using the 0.42 w/cm so Denver Water could take data on that material as well.

“Compressive strength came down slightly,” Holck explains. “With a 0 percent fly ash mix, it was 6,300 psi and a 10 percent fly as mix was 6,900 psi. The reduction in the w/cm ratio allowed for wiggle room to get more water in the mixture, which expanded the window of the large slab placement, and allowed the contractor more room to play with the mixture. Ultimately, we ended up using the 0.42 mixture on the tank because after placing the vaults, the contractor was more comfortable with that ratio.”

On October 10, Garney placed the floor slab, pouring 1,500 cubic yards of concrete over the course of 10 hours with three boom-style pumpers. Concrete was delivered at a rate of 150 to 200 cubic yards per hour, with 15 to 20 concrete trucks driving to the site per hour. Holck says the process went smoothly and the average compressive strength at 28 days was 7,130 psi, which was well over what was needed. Spanning the next few months, Garney placed the walls and the columns, completed in 16 different segments.

“The contractor liked the performance of the IC concrete so much, they asked if they could use the same mix on the walls and columns,” Holck says. “They had two sets of forms for the walls and had to reuse them to continuously place the walls to meet the schedule.”

The speed at which the concrete came to strength allowed them to jump the forms faster. Whereas with a traditional concrete mix, they would have had to leave the forms on for two to three days before stripping them off, they were able to strip the forms the next day.

March 4, 2012, was the date for the roof slab placement. It took longer because the weather was much cooler than placing the floor slab the previous October. Snow and cold weather for the six to eight weeks leading up to the project delayed the schedule. The roof slab was also thicker, at 8.5 in. thick, than the floor slab at 5 inches, so it took more concrete at 1,800 cubic yards. The delivery rate was the same pace, 150 to 200 cubic yards per hour.

The rapid strength gain realized with the IC concrete was an initial concern for Holck. “It came up so fast, I wondered if there would be an issue with elevated temperatures in the concrete matrix due to the heat of hydration,” he says. “In concrete with higher water content and a lower w/cm ratio, strength comes up quickly and the chemical reaction happens so rapidly, the byproduct is heat.”

The floor slab’s temperature peaked at 77 degrees. The ringer around the tank, a thick section on which the walls sit, measures 1.5 ft. thick by 5 ft. wide. This massive section is thicker and wider, so Holck expected the temperature to be higher, and it was, reaching 106 degrees at its peak. The average temperature of the walls was 86.7 degrees, and the roof slab temperature was 92.1 degrees, also expected because it was thicker than the floor slab.

“These temperatures are really nice and mellow for a material that gains strength as quickly as this one did. With reduced temperatures, we can easily expect less cracking,” Holck says.

Denver Water and Bates Engineering visually inspected all of the concrete after it was placed and estimated there were about 40 percent fewer and smaller cracks than expected. Then, they filled the tank with water and watched it for leaks before back filling, finding no significant cracks or leaks.

The radius of the finished tank measures 146 feet and the walls are 24 feet high. The project was completed and put into service in June 2012. The tank has not yet been drained for internal inspection, but all indications show that it is not leaking, Holck concludes.

Using IC concrete in 2014, and beyond

Denver Water is moving forward with several other construction projects in 2014 that will specify the use of lightweight aggregate in IC concrete. Holck says Denver Water is building two 10 million-gallon tanks with IC concrete at the Ashland water facility, and the floor slab was placed in January.

Another project using IC concrete at the Highland facility in Littleton, Colo. will install the floor slab for one 10 million-gallon tank in April. Additionally, Holck notes that because of its experience with the Lone Tree installation, Bates Engineering is specifying IC concrete on projects for its clients going forward.