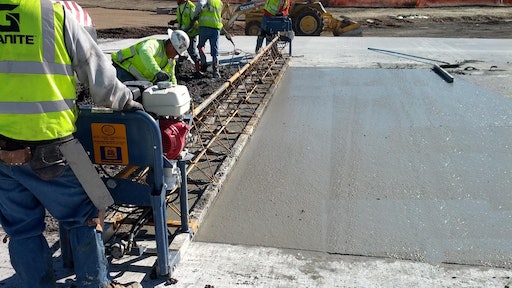 The Speed Screed Heavy-Duty is designed specifically for low-slump, high-production applications, making it well suited for the Miramar project.

At the Marine Corps Air Station (MCAS), Miramar, CA, several concrete forming and finishing challenges were part of the Design/Build MV-22 (Osprey) taxiway expansion, parking apron additions and hanger construction. The project is an $85,000,000 joint venture between Hensel Phelps Construction and Granite Construction, one of the largest diversified heavy civil contractors and construction material producers in the country. The concrete paving portion of the project would be Granite’s responsibility.

The Osprey MV-22 is an innovative Short Take-Off and Vertical Landing (STOVL) aircraft that generates high exhaust temperatures. In fact, the heat produced is so great that conventional Portland cement concrete (PCC) cannot withstand the extreme thermal loads. The development of “high-temperature concrete,” held in place by specialized paving forms, proved to be the optimal solution to this unique problem.

The high-temperature concrete used by Granite on the Miramar project incorporated an aggregate known as trap rock. Trap rock is naturally fire resistant and combines firmness with an ability to bend instead of breaking when under pressure.  Thanks to its hardness and durability, trap rock has become a preferred aggregate for builders in heavy construction with specific-long lasting, temperature-resistant requirements.

Extremely tight specifications for the high-temperature concrete slabs at Miramar led to a project decision by Granite to use steel forms rather than slipforming.  According to Justin Seichter, Granite engineer, “The slump was around 2 in. for the project and the specs require a zero edge slump. With this special mix, there were concerns about meeting that spec while slipforming, so we set steel forms to control and ensure a vertical edge.”

The use of forms did not prevent Granite from using its slipform crews and equipment. The company’s G & Z slipform paver was first used to place the high-temperature concrete by straddling the forms and placing separate pavements that were either 30 or 34 ft. apart. Once the original slabs were set and cured, the slipformer traveled on the existing pavements to place and finish the 30- and 34-ft. gap sections.

Besides the paver, Granite also purchased a Speed Screed Heavy-Duty from MFC to place and finish the Miramar pavements. The screed was used on all full-width pours under 30 ft. wide and also on smaller irregular areas and sections.

Since this screed is designed specifically for low slump, high-production applications, it was well suited for the project. According to Mark Bare, construction manager for Granite, “The Speed Screed handled the high-temperature mix with ease. I’ve had plenty of previous experience with the MFC forms and screeds and know they can be relied upon to get tough jobs done on time.”

The entire Miramar project is due for completion in two years and is planned to be a Gold-certified Leadership in Energy & Environment Design (LEED) project. Some of its most sustainable features include 1.3 million sq. ft. of recycled concrete and asphalt, which will generate 73,000 tons of aggregate used in the base support of the new high-temperature concrete aprons.