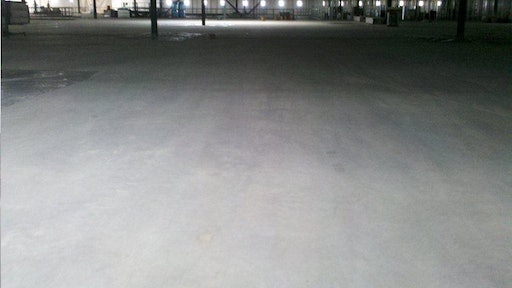 The FORTA-FERRO macro-synthetic fiber was used in a very large slab on metal deck project in Middleton, Del., that provided a working surface for the 2nd-level order fulfillment operations for the Amazon.com division of Amazon Corporation.

In what’s become almost an annual rite of passage, concrete contractors at various industry conferences show me “war wounds” that have resulted from wire mesh and rebar (reinforcement bars). They wear it almost as a badge of honor, but many of them realize it could have been much worse.

These injuries are personally damaging for construction businesses and contractors that value safety and place a premium on taking care of their workers, but they also have the potential to greatly impact the bottom line in the form of costly litigation and OSHA-related fines.

The way it was

The construction of slabs on metal deck also serves to describe the process as a working definition – it involves use of a concrete slab with a supporting platform made up of structural steel beams and a metal deck. These decks represent a cost-effective way to take advantage of above-ground areas for a variety of uses, including office space, inventory storage or fulfillment of product orders.

A typical metal deck consists of a corrugated steel sheet with a concrete topping, with the sheet serving as both a permanent form and as the principal reinforcement for the slab. Historically, welded wire mesh fabric has been used as a secondary (non- structural) reinforcement to control – rather than prevent – concrete cracks.

Variations in concrete’s internal temperature gradient and its tendency to shrink as excess mixing water evaporates from drying concrete cause the cracks. Put another way, when the top of the surface attempts to shrink while the bottom surface is being restrained (often by deformations of a corrugated metal deck), cracking occurs.

Synthetic fibers have become a well-recognized, cost effective, and acceptable reinforcement for slab on metal deck applications. An increase in the number of fiber-reinforced slab on deck projects provides clear evidence of the growing acceptance and sufficient performance of fiber reinforced concrete.

But beyond the cost-savings and long-term reduction or prevention of cracking is a more fundamental reason to choose synthetic fiber reinforcement: It might just save someone’s life.

A simple question of safety

The use of conventional steel reinforcement in slab on deck applications brings a host of ease of use and proper placement concerns. For the welded wire fabric to be effective in controlling this shrinkage/temperature cracking, it must be placed within the top-third of the concrete cross-section, a process that is quite challenging in execution. The simple transport of mesh rolls or sheets to upper-level deck projects is difficult and labor-intensive.

The time and labor savings provided by a fiber reinforcement system that is simply added to the concrete mix as an ingredient is a considerable advantage, in addition to the uniform three-dimensional reinforcement coverage it provides throughout the concrete deck matrix compared with single-plane steel.

Let’s also not gloss over the fact that a single-plane layer of steel can be tripped over regardless of where the surrounding concrete is located – slab on deck or slabs on ground. Wire mesh can be dangerous in any application from handling, transporting and tripping.

According to a March 29, 2012, proposed rules publication titled “Reinforced Concrete in Construction, and Preventing Backover Injuries and Fatalities,” OSHA conducted a review to determine the number of worker fatalities resulting from working with rebar for concrete reinforcement, including constructing rebar mats and cages and installing rebar. From 2000 to 2009, 30 workers died while performing rebar-related activities, including five from impalement injuries, nine in falls, eight when rebar cages or columns collapsed and six as a result of “struck-by” injuries.

Advocacy from the front lines

Tommy Ruttura is president of Ruttura & Sons, which has been ranked the No. 1 concrete contractor in New York City by New York Construction News and recognized by the American Society of Concrete Contractors with the Best Safety Achievement Award for the lowest incident rate for specialty contractors, as well as the Zero Lost Time Achievement Award for having zero lost workday cases from injury and illness.

With safety and quality so important in the largest and most competitive construction market in the country, his stance on the benefit of fibers vs. wire mesh in slab on metal deck projects is firm. As the owner of a fourth-generation, family-owned business with revenues approaching $100 million annually, Ruttura said using wire mesh is impractical, inefficient and dangerous.

"Try getting wire mesh from the truck to the second floor of a high-rise building, let alone to the 15th floor," said Ruttura, who has chosen synthetic fiber reinforcement for the company’s current 19-story project for Memorial Sloan-Kettering Cancer Center in Manhattan. “When you pump fibers the reinforcement is always in the right place, and that's not the case with wire mesh. Wire is never where it needs to be, it’s where it wants to be. Plus, workers are always tripping and falling on it.”

Ruttura & Sons has preferred fibers to wire mesh for more than a decade. The final straw happened when the company was sued for cracks in a floor that used wire mesh as secondary support. Ruttura spent years litigating the lawsuit and ultimately had to pay $1 million to settle it, and none of the payout was related to safety regulations that have become increasingly strict across New York State.

The technology is proven and sound. It’s been that way for more than a decade. But synthetic fibers are more than simply a sustainable, cost-effective solution for concrete contractors. They also eliminate any headaches when it comes to removing potential hazards from a worksite.

“General liability insurance is through the roof,” Ruttura said. “Owners and operators almost always lose the lawsuit if a worker gets hurt, so it really doesn’t make sense to use wire mesh for reinforcement anymore. Fibers are much, much safer.”

Daniel T. Biddle is the vice president of sales for FORTA Corporation, an innovator in synthetic fiber technology solutions since 1978. FORTA-FERRO is a macro-synthetic fiber for the concrete industry.

Demand for Fiber Reinforced Concrete Expected to Reach $3.2 Billion by 2025