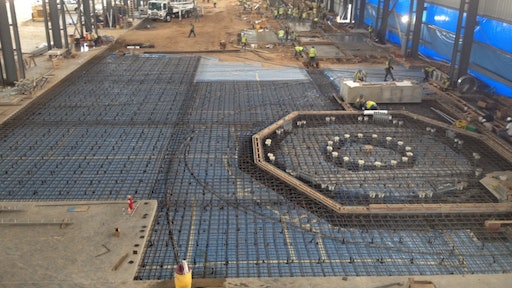 Sitting on a 75-acre site in Houston, Texas, OMK, a supplier of casing and line pipes to the U.S. market has a new facility to call home. The mill is designed to produce greater than 200,000 tons per year of oil and gas pipes.

Since 1980, TAS has grown to be one of the premier concrete contractors in the Houston and Dallas, Texas region. The company has invested more than $25 million in their fleet which includes pump trucks, laser screeds, dozers, and backhoes. Today, TAS is comprised of over 1,200 employees and is known for their attention to detail and quality work.

Seven months to complete the project

“Jay Lindley, of Mission Constructors, came to us with a very large request,” says Tim Manherz, Vice President of Operations at TAS. “Can we finish this facility if we start on May 1, (2012) so OMK can begin manufacturing pipe by the end of the year?”

In order to accommodate the client’s request, it was paramount for Mission, TAS, and other trades on the job to meet and determine a schedule agreeable to all parties. Big jobs like this need a lot of coordination and not your ordinary level of coordination, but at a high-level. As if completing the project in a seven month time period wasn’t challenging enough, Manherz says the project was also a design-build project.

“When we started the job, we barely had any of the foundation drawings to begin our work,” he says. “There were a lot of unknowns, most of which we wouldn’t know until just before we would begin working on a specific section.”

While this was a unique project for TAS, it wasn’t completely unfamiliar territory. Two years ago, TAS completed a similar job in the area. “We were lucky enough to pick-up that high-demand, unique, difficult project and the people we built it with gave us the knowledge on how to work with other trades on the jobsite.”

Manherz says the experience from that job allowed TAS to bring their knowledge to the table and help everyone on the jobsite understand how the project would come together.

TAS was responsible for constructing two foundations for the OMK project. Auger cast piles were to be constructed for areas of the building to house steel coil and heavier equipment. The building itself was to be a pre-engineered metal building and sits on bell bottom piers.

The first of several challenges included building a slitter pit that was 30 feet below finish grade.

With all the brainstorming between the trades (primarily coordination with the steel erector, the excavator, and the electrician), a plan was put into place to allow TAS to initially start the 30 foot deep structure and get that waterproofed and back-filled as soon as possible.

“We started with the slitter foundation above ground, and had multiple elevations, anchor bolt pockets, anchor bolts, and circular forms,” says Manherz. “With the use of a Unistrut, we were able to incorporate the wide flange beams, which weighed between 400- to 1,000-pounds, into our pours with excellent accuracy.”

He adds the coordination between the trades, especially TAS and the electrician was equally important in keeping the job on track.

“We had to get the exterior forms up and the lower mat of steel placed, then the electrician had to get their conduit on top of our lower mat into specific locations for the equipment to receive power.”

Adding to the obstacles, the electrician was receiving information sometimes days before and, at times, hours before the conduit was to be installed. This was largely due to the engineering drawings still being designed.

Because of changing weather patterns and constant exposure to weather conditions, it was imperative that once the pit was complete, the foundation work for the pre-fabricated steel structure would begin.

The foundation consisted of 90-foot auger cast piles, and according to John Joyce, Senior Project Manager, the auger cast pile design was an ongoing issue for the same reason as the construction of the slitter — where should the auger piles be located? “Most of the piles were within a rectangular area with an unusually thick concrete slab of 12 inches. This area would be where the coils of steel would sit.”

“We started with drilling the piles for the interior pier caps first and then moved to the exterior grade beam of the building,” Manherz explains. “Because of the accelerated schedule, we had to meet with the engineer and create a construction joint for the slab on grade so we could place the slab monolithically on the exterior grade beam in order to receive the steel for the structure.”

Starting at this point for the foundation was critical in order for the steel erectors to begin their building process while the foundation had time to cure.

“We continued to move east to west taking care of the foundations and staying ahead of the steel erectors, about 10 column lines or so,” Manherz says. “They followed us by erecting the building and putting on the roof and drying the building which allowed us to work in conditions that were not affected by the weather.”

Creating the slab on grade

Three hundred and sixty five additional auger piles were also needed, to be placed on an eight foot grid in both directions underneath the receiving area slab to house the rolled steel that was going to be railed in for the manufacturing of piping.

Coordination between TAS and the mechanical contractors was critical to the success of pouring the slab. And according to Joyce, the pour was never really completed at one time but was strategic in nature. The interior slab of the facility was constructed in sections which were 12 inches thick.

“When it was determined an area would be the location for a piece of equipment, we could go in and pour the slab around that specific area. For example, we could pour up to column line 28 and then we’d have to stop until we knew where the next piece of equipment would go.”

In addition to the foundation and flatwork, Joyce says, “The floor we built is laced with trenches to catch the fluids that are involved in the manufacturing process. There is a maze of graded trenches in the floor — under the equipment and between the equipment. What was always part and parcel to the project, was how quickly can we get the floor done, based on when we know a piece of equipment will arrive on-site.”

Continuing to challenge the crew at TAS, OMK was purchasing equipment for the facility from multiple sources — USA, Canada, Italy, and Japan. Many measurements were in metric, requiring the crew to make any necessary conversions in order to construct the proper dimensions in the area where concrete was to be poured.

“It made it extremely hard for the engineers to coordinate between all of the equipment manufacturers to receive their equipment information, design the foundations, and then get those finished drawings back to the steel manufacturers to expedite those items quickly,” Manherz says.

With the purchasing process of equipment for the facility becoming an on-going operation, Joyce says, “We were always being updated on the engineering drawings, the plans, the exact openings, beam locations, embedded beams; everything was unique to an individual piece of equipment. It was always down to the wire.”

Past and present relationships matter

Despite the challenges, the crew with TAS, as well as the other subcontractors, would not have been successful in completing the job had it not been for the relationships they formed.

Manherz says TAS is a preferred concrete contractor for Mission. “And that’s because of our relationship with them, especially so after this project.”

Precise scheduling between the general contractor, TAS, the electrician, the plumber, and the steel manufacturer supplying the metal building walls was critical. “This was going to take timing and coordination in order to get the fabricated metal building up as quick as possible,” Manherz says.

Additionally, OMK, the owner of the building, had a representative on site that had the authority to make decisions without much delay.

“Having the OMK rep on site was extremely helpful,” Manherz says. “I’m certain, if we had to wait even two days for some decisions, it would have cost us. This project has been a demonstration of the importance of working together with other contractors. Everybody wants to get the job done, but getting there is dependent on how well your team can work with others.”

“The biggest accomplishment on this job was the fact we had cooperation up and down the line,” Joyce says. “From the owner to the design team; the contractor, the suppliers — without that, the whole process goes away. We had to work together, otherwise we would have never finished.”