Every year the Concrete Foundation Association (CFA), based in Mt. Vernon, Iowa, holds a contest to honor the best and most difficult foundation projects of the year. 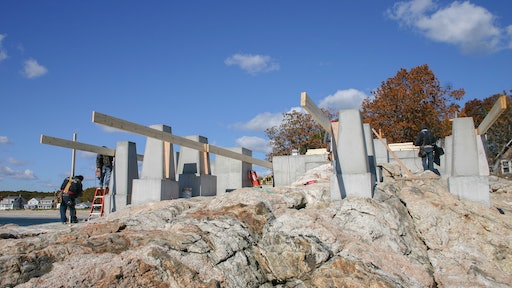 Building the foundation for house on rock is no easy thing. Shown here are the footing pads and piers. Workers are beginning to form the concrete deck which will become the floor of the house.

Every year the Concrete Foundation Association (CFA), based in Mt. Vernon, Iowa, holds a contest to honor the best and most difficult foundation projects of the year. So, Purinton Builders, East Granby, Connecticut, decided to submit their “Point O’ Woods” cabin retreat foundation and deck project located near Old Lyme, Connecticut.

Old Lyme is a small peaceful beach community along the Connecticut coastline. The coast has rocky points and sandy bays that owners of beach houses flock to during the summer months. However, building these resort homes can be a daunting project, especially when they are built on rock. That’s the challenge Purinton Builders accepted when they won the contract to provide the footings, piers and a concrete deck for a small resort home on an uneven rock point on the edge of the ocean.

The original cabin was run down; resting on an old rubble foundation and the footprint was about 1,400 square feet. The lot size was approximately 50 feet wide and 150 feet long, all on rock with the front of the building cantilevering five-feet out. Water surrounded three sides of the project and there was almost no working room—additional safety equipment was provided as conditions dictated.

Dennis Purinton, President of Purinton Builders, says Old Lyme is a vacation area with “Hammer Law” rules in effect—no construction work is allowed from Memorial Day to Labor Day, so the construction season is fall and winter.

There were many challenges that made this construction a perfect candidate for the CFA contest:

Laying out pads and piers

With no flat surfaces and elevation differences of several feet, layout became the most difficult part of the job. “The elevation and center of the top of the piers was all we had,” says Purinton. “We knew the footing pads had to be 18 inches thick and the pitch of the rock under the piers couldn’t exceed 10 percent. Starting with the top center point of each pier we located each point in space in order to locate the bottom center point for each of the 12 piers.” They used a total robotic station and string line for this work, but Purinton says using the string line was the most helpful. After the points were located a subcontractor cut and chipped out the rock to provide the specified surface for the footing pads. Two of Purinton’s men worked half a day on each footing pad to scribe forms to the rock—no concrete spillage was allowed.

The plans also defined the top length and width of each pier so, working backwards, they laid out the tops of piers with string line. Then by measuring the length of each pier and calculating the five degree pitch, they were able to lay out the bottom shape on each footing pad. The tapered piers were cut and assembled in their shop using 2x12 inch lumber, plywood and surrounded by Western aluminum forms.

Securing all the formwork so it didn’t move during concrete placement was also a challenge. They decided to use Hilti “Qwik Hus” screw anchors for rock—employing several thousand. Holes were drilled in the rock to receive the anchors that secured both forms and braces.

With layout as the most difficult part of the job, placing the engineered reinforcement was the most critical. Large waves rolling up on the shore could potentially cause the floor slab to lift. The space under the floor is wedge shaped, with the widest part of the wedge (10-feet high) facing the ocean. Atlantic storms occasionally produce waves big enough to roll to the back of the wedge, pushing up on the floor slab. So the careful installation of reinforcing steel was all important.

All reinforcement was epoxy coated, vertical pieces were three-quarter inches in diameter (#6 bar) and horizontal members being five-eighths inches in diameter (#5 bar). Workers drilled 18-inch deep holes in the rock and anchored them with epoxy. Purinton especially likes Hilti products and bought their largest drill with a clutch for worker safety—if the drill-bit caught on something in the hole the operator wouldn’t suffer arm damage. It also featured a Hilti dustless drilling system with an attached vacuum and they were surprised to see how dust removal increased drilling efficiency. Purinton’s son, Mike, enrolled in and passed, the ACI-CRSI “Adhesive Anchor Installation Certification Program” and set all the anchors to specification. Proper anchorage was seen to be very important.

After concrete placement in the foundation pads, holes were drilled, rebar for the piers was installed and anchored with adhesive. The same procedure was followed on top of the piers to anchor rebar to the double reinforcing mats for the slab. In this way, a continuous load-path went from the concrete slab into the rock below.

The biggest issue for the concrete on this project was durability—everything is exposed and gets regularly soaked by ocean salt water. So the engineer specified that concrete couldn’t exceed a 0.45 water/cement ratio. The mix contains 600 pounds of cementitious material, 30 percent being fly ash and slag. Six percent air entrainment is included for freeze-thaw resistance. A super plasticizer admixture was added to increase durability, allow a placing slump of eight-inches, and to keep the ready-mix concrete fresh longer.

In total, the job only required about 80 yards of concrete.

There was little room to work on the site and footing was especially difficult. Purinton said they employed the necessary safety precautions as dictated by the jobsite environment. They also extended the deck forms just so there would be a place for workers to stand. The form is also being used by the contractor to construct the building.

Working under winter conditions concerned Purinton when they placed the deck concrete because it was only eight-inches thick—the piers were fine because the thick concrete produced enough heat for protection. So workers insulated above and below the deck forms and covered the top with plastic sheeting. Maturity meters were used to monitor the slab, five were located in the areas of greatest concern. The requirements of ACI 306-10, tables 305.1 and 307.1 were followed. Strength gain turned out to be uniform and there were no freezing issues.
They were able to rent a concrete boom-pump that could fit under the bridge and everything was placed by pump.

Jim Baty, the Executive Director of the CFA, says that making profit on a very difficult project is one of the ground rules of their awards competition. “There is no point to giving an award to a project if it loses money,” he says. Purinton says this project was successful, his company achieved the profit they expected, in spite of considerable weather variables and the many unforeseen site challenges. “Our specialty is difficult projects like this, ones that most of our competition avoids, so we have learned how to bid them,” he says. “But the many layers of difficulty presented in this job made it our most challenging to date and I particularly wanted it,” he added.

An interesting footnote is there was no room on the property to place an air conditioner or heat pump, as the footprint of the house went to the property lines. So a geo-thermal well was drilled 350 feet into the rock and pipe was tunneled under the floor slab and into the house.


Companies in this article