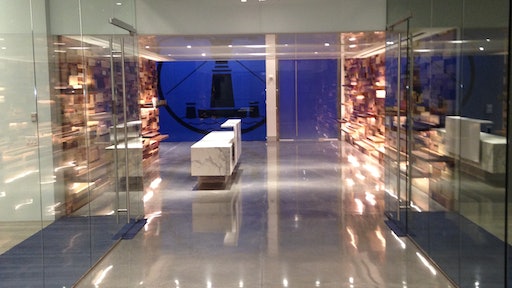 The Alexandria Life Science Center is now home to a beautiful, high-end polished concrete floor. This is a one of a kind building with a floor that will last 100 years.

Prompted by his L.M. Scofield Inc. sales representative, Bart Rockett was urged to get involved in the LEED certification program to learn how polished concrete contributes to the Green movement.

Rockett has been performing decorative concrete work since 1986. Five years ago he expanded his business to include polished concrete and thus, Philadelphia Polished Concrete, Inc. (PPC Inc.) was born. Rockett purchased a 20-inch Vic International grinder and began offering polished concrete to his existing customers–primarily performing small jobs in basements and garages.

Last year he was offered a polished concrete floor job in the Alexandria Center for Life Science, a bio-tech research center in Manhattan, New York.

Rockett met with the general contractor and project manager, Tom Yearick of Shawmut Design and Construction and learned the architect of the project was KlingStubbens. “As the story goes, this project would have been one of the first Green and LEED buildings the architect would have worked on and they wanted the look of polished concrete in the lobby,” he explains.

Assembling the crew
A high-profile project such as the Alexandria Center for Life Science meant Rockett needed to assemble a crew who were the best of the best. With the assistance of Ron Green, Rockett's business agent, he joined the Brick and Allied Craftsman Local 4 and became the first union contractor in the state of New Jersey who specifically states, “we polish concrete.”

“The union gave me five of the best guys in my union; and that was very important to me. I needed a team who worked together all the time; who were familiar with each other,” he explains.

Starting the pour
The job consisted of pouring 10,000 square feet of flatwork with a two to three inch capping slab. Approximately 1,800 square feet of the lobby was to be polished. The crew of five men poured the concrete in sections—approximately 3,500 feet per day. In order to ensure a level and flat floor, the crew used hand screeds. The floor was finished with pans and finish blades on an Allen Engineering propane power trowel.

As the pour was completed, cold winter temperatures affected the time it took for the concrete to cure. To accommodate the slow curing process, the crew waited seven days before covering the floor to protect it from other trades working on site. Five months later, the floor was uncovered and there was a noticeable problem. A hydration stripe was visible.

“How could this be? We used a breathable membrane floor covering and we waited seven days to cover the slab,” he says. “There shouldn’t have been an issue.”

The finished floor was supposed to include a cream finish, high sheen and no stones. The architect of the project had specifically noted in the plans there was to be no aggregate visible on the floor. Taking care not to expose any aggregate, Rockett gave the floor a light grind with a white metal bond diamond.

The lesser of two evils prevailed in this situation. In order to produce a quality product, a minimal amount of aggregate would be visible on the floor.

The clock was ticking. The Alexandria Center for Life Science was nearing the completion date. As the building was being finished by other trades during the day, Rockett and his crew worked a second shift, (2:30 pm to 11:00 pm), grinding the floor slowly with a 30-inch Lavinia propane grinder to remove the hydration stripe.

The crew dyed the floor using L.M. Scofield’s Soft Gray dye. The hydration stripes reappeared. “I was told I would never get the stripes out,” Rockett says. “Guys who have been grinding floors for 20 years told me I wouldn’t be able to remove them. We continued to dye the concrete, but the hydration stripes were taking the dye differently. With surgical precision, we spent an enormous amount of time fixing something that shouldn’t have occurred.”

The value of good relationships
Frustrated and puzzled, Rockett looked to his 25-plus year long relationship with industry suppliers. He says one supplier specifically helped save the project from ruin.

Brian Small, a sales representative from Jon-Don (Langhorne, Pennsylvania), has been in the surface preparation business for over 10 years. Rockett credits Small’s in-depth knowledge and ability to quickly offer solutions as a key component to solving the problem.

“I have a nice relationship with Jon-Don. Through every turn on this project, Brian would offer solutions for me to try,” he says.

Small recommended Jon-Don’s own line of diamond abrasives. “We used a bunch of different diamonds from Jon-Don. They were always available and always had product ready for me the following day. Had it not been for their knowledge and service, I don’t think we would have been able to finish this project to the satisfaction of myself, the project manager or the owner.”

This was the first time Rockett had to deal with the hydration stripe and hopes it will be the last. While he isn’t entirely sure what caused this phenomenon, he theorizes, “The floor itself was at ground level. There is a parking garage underneath our slab. The base slab was 10 inches thick. The only explanation we can think of, is at the time of the capping slab pour, the temperature outside was sub-freezing and the room we were working in was 50 to 60-degrees Fahrenheit. Clearly there was some temperature disparity and moisture must have developed between the hot and cold areas of the slab.”

Despite the problems, the Alexandria Life Science Center is now home to a beautiful, high-end polished concrete floor. This is a one of a kind building with a floor that will last 100 years. For PPC Inc., this was a challenging project which offered a few lessons to be learned, even for a veteran contractor like Rockett.