Sometimes all it takes is an eye for innovation and the courage to risk it all. For Duke Long, owner of Interstate Sawing Company in West Bend, Wis., it’s the secret to his success. 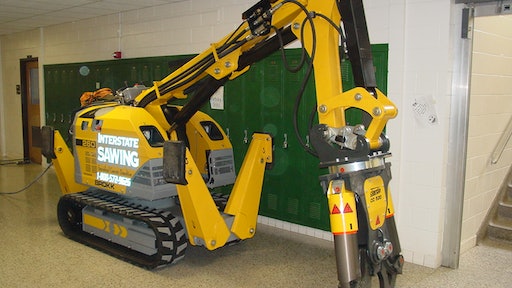 Sometimes all it takes is an eye for innovation and the courage to risk it all. For Duke Long, owner of Interstate Sawing Company in West Bend, Wis., it’s the secret to his success. And it has led his company to approach demolition work from a unique perspective.

“I was never going to be happy, fail or succeed, unless I did it for myself,” Long says.

In November 1996, with his wife, Sandi, by his side, more than ten years experience in concrete cutting, and 15 more in road construction, he set out to do just that. He launched Interstate Sawing Company and hasn’t looked back.

“Sandi and I sold everything that we had. I bought two road saws and a brand new pickup, and we paid our mortgage up front for the entire year,” Long says. “We housed the company out of our garage and had only 30,000 dollars to get through the first year.”

By the end of the first nine months, the Longs realized the company would be doing much better than just getting through that first year. With additional equipment and staff, it seemed that they knew the secret to making a business grow, and people were taking notice.

“Our local bank saw that we were growing and came knocking on our door asking for our business,” Long explains. “They wanted to give us a line of credit and help us finance five more trucks.”

Today, the company has 25 employees and business doesn’t show any signs of slowing. It’s a growth that Long attributes to his passion for innovation, and willingness to step outside of his comfort zone. And venturing into the unknown – with the purchase of a Brokk remote-controlled machine – was one of those risks that proved to be the turning point.

One hour
You won’t believe it. That’s what Long tells customers about Brokk machines, because that’s what he’s experienced.

“I’ll come out to a job site, and the person will look at me and the Brokk robot and ask, ‘What are you going to do with that thing?’,” Long says. “I tell him, ‘Give me one hour. You won’t believe what I’m going to do with it.’”

It was ten years ago, at the World of Concrete trade show, when the Brokk remote-controlled units first caught his eye. He was intrigued immediately, but wanted to take some time to learn about and examine the machines. In 2007, with the ideal project at hand, Long decided to finally purchase his first Brokk robot.

“I knew I had the perfect job for the machine, but I was still nervous about the purchase and the unknown,” Long says. “But I ripped the Band-Aid off, purchased the machine and took it on our first Brokk job at a nearby high school that needed some concrete cutting.”

In addition to Interstate Sawing Company’s contract for cutting, the school district had solicited bids for demolition. The area that needed the demolition work was so sensitive – it was in a confined space, with surroundings that couldn’t be touched – that the company that had won the contract didn’t want to get close to it. Long’s team stepped up to the plate, and took on both the concrete cutting and the demolition work.

“I’d cut the concrete and crush it as we went along, which kept everything very stable,” Long said. “It worked great, and I was amazed by the Brokk machine’s capabilities.” The job took Interstate Sawing Company to a new dimension of the industry.

Spreading like wildfire
“The first year was a really huge deal,” Long said. “Everyone was talking about these robots, and I was going from job to job. Within that first year, I knew that incorporating Brokk robots into our equipment fleet was the best thing I could ever have done for the company.”

Customers throughout Wisconsin were hearing the buzz about Long and his remote-controlled demolition machines. But the chatter didn’t stop there. Interstate Sawing Company was getting jobs in Illinois, Indiana, Iowa, Michigan, Minnesota and North Dakota, too. Thanks to the Brokk machines, Long was growing his territory, as well as his work year. Brokk robots are not only remote-controlled, they’re fully electric, meaning during operation they’re both emission-free and quiet. That means they can perform indoor work in winter months without causing disruption for businesses.

“Being located in Wisconsin means we’re mostly seasonal work. The robots have allowed us to go into hospitals, food plants, factories and schools, places that can’t have exhaust in the buildings,” Long notes. “This has stretched our season to March through January, going from four months of downtime to only one or two. That’s a huge difference right there.”

As the season and number of projects have grown, so has Interstate Sawing Company’s fleet of Brokk machines. Long now has six units, ranging from the Brokk 50 to the Brokk 400, and the work they do continues to impress customers and prospects. It also inspires Long’s vision.

Innovation redefined
While Long attributes much of his company’s growth to always keeping an eye out for the next best thing, he’s also always looking for ways to make that next best thing even better. This has included thinking about innovative new ways to use the Brokk machines, and Long has even created a few attachments of his own for the units.

“The Brokk robots’ capabilities are truly unbelievable,” he said. “Every job I’m on, I’m always coming up with new ideas. Along with all of the company’s attachments, we’ve made plungers that we have attached to the Brokk equipment which enable us to easily pick up a five-foot by five-foot foot slab of concrete with no trouble at all.” In fact, on one location, Interstate Sawing Company removed 10,000 square feet of concrete in just two days.

Along with plungers, Long’s team has designed and engineered air compressors, chisels for soft demolition and platforms for Brokk machines to sit on while being hoisted by a crane. When he gets an idea for an attachment, Long will work with a machinist to design it, build it, test it and tweak it until it’s perfect.

Cash back
It’s been five years since Long purchased his first Brokk robot, yet the excited talk about what Interstate Sawing Company can do with the machines isn’t close to slowing down.

In the summer of 2012, Long and one of his crews took a job at Carleton College in Northfield, Minn. The project entailed soft and hard demolition of a building known as Evans Hall. They were to take down 24 staircases – four sets on each of the six stories – as well as all the ceilings and plaster. Evans Hall is a historical building on the college campus, so all the demolition needed to be done without sacrificing its historical integrity.

Traditionally this job would have been completed using all manual labor, and dangerous labor at that. Labor would normally be completed with hammers, which causes mesh and plaster to fly about. With the Brokk machine, an operator was able to stand 20 feet away while working from the inside out, effortlessly demolishing the staircases and tearing the plaster off the mesh. Interstate Sawing Company completed the entire job in just four weeks.

“After the work was completed, I was told that what we did with the Brokk robot would have taken 20 guys to keep up, and that was just in the first two hours,” Long says. “After that, the difference was incalculable.”

“It definitely put us on the map with that customer,” he notes.

Paving the way
Being a first generation concrete cutting and demolition business owner, Long says he’s enjoyed paving his own way. After all, leading the industry has been his goal from the beginning.

“Fail or succeed, it didn’t really matter, I was never going to be happy unless I pursued concrete cutting in my own way,” Long says. “I knew I could do it better than everyone else.”

Long’s willingness to take risks and his commitment to investing in technology creates new opportunities with every job. The future of Interstate Sawing Company in demolition is extremely optimistic.