Bricklaying, bridge building and termite-inspired robots are just some of the emerging technologies that have the potential to transform the construction industry 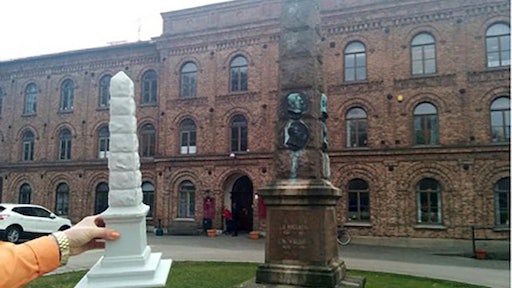 There are many advantages to 3D printing in construction. Construction is faster and more accurate, since the model already exists and the printer merely replicates it. That means that errors can only occur due to printer malfunction.

Now that the construction industry is finally in sustainable recovery, it's time to look beyond survival at how the industry can develop and grow. There are numerous challenges ahead. Does the solution to many of these challenges lie in technology? It seems likely.

Let’s look at five trends that have the potential to transform the industry.

3D printers have been all the rage over the last couple years, and the construction industry wants to get in, too. In January 2015, a Chinese company announced that they had built the world's first 3D printed apartment building; later on, plans for a completely 3D printed office building were unveiled as well.

There are many advantages to 3D printing in construction. Construction is faster and more accurate, since the model already exists and the printer merely replicates it. That means that errors can only occur due to printer malfunction. 3D printing can also be eco-friendly, using only as much material as needed; excess materials can be recycled. The building material itself is also often made up of recycled materials.

Finally, 3D printing reduces labor costs, since it requires minimal input from human workers. This aspect will also mean a challenge for the industry, since it will lead to a reduction in employment.

Nanotechnology is already being used in building materials with great results and with a wide range of applications throughout the industry.

For starters, nanotech parts in construction can greatly improve a building’s energy efficiency, thanks to a new insulating material called aerogel. Aerogels are much thinner than most insulating materials and can also be used on windows. That's not all, aerogel can even turn your windows into invisible solar panels that help power a house.

Another discovery is that nanotechnologies can prolong the life of a building. Mixing carbon nanotubes into concrete makes the nanotubes fill out the holes that naturally occur in concrete. Adding nanoparticles has been proven to create concrete that's not only more durable, but also fire resistant, self-healing and easy to clean.

Autonomous robots are another cool technology that has been making appearances on construction sites. They're becoming  increasingly sophisticated. Let’s look at a few robots that show promise.

In 2015, an Australian inventor unveiled his robot bricklayer invention. This robot is capable of working 24/7 with a speed of 1,000 bricks per hour: that translates to roughly 150 homes per year. Not impressive enough? In the streets, the Tiger Stone is a bricklaying machine already being used to lay brick roads, working at four times the speed of the average human bricklayer.

Possibly the only thing ever inspired by termites, these robots were based on the way termites cooperate, working independently on the same project. Instead of being programmed to do a certain task, each robot reacts to what it encounters. Researchers are saying that these robots have immense potential when it comes to working on dangerous construction projects, like underwater projects.

As more than 61,000 bridges in the US were found to be structurally deficient in a 2015 study, an invention of this sort may come in very handy. Dutch inventors are claiming that by 2017, they will have a robot that is capable of 3D printing a steel bridge in mid-air. That's not just speculation: in fall 2017, it will actually be put to use in Amsterdam.

Naturally, one issue here is that this may lead to further job losses; however, many of the inventors are looking at these robots as a solution to existing worker shortages or completing dangerous work.

Though they're technically robots too, drones are already finding so many applications in the construction industry that they deserve their own mention on this list.

Overseeing a construction site is probably the area where drones are working the hardest. Flying over a construction site, drones can provide a unique perspective, seeking out and preventing safety hazards in a much quicker and cost-efficient manner than traditional methods. They can also be used to show an impatient client how work is progressing on the site, so that the process can be adjusted along the way.

Drones are also promising when it comes to reducing worker inefficiency; they can monitor workers much more easily than any site supervisor. Supervisors can also use drones to get real-time information about the site and provide relevant feedback. This can be a huge asset when it comes to keeping the project within the deadline and budget.

When a contractor is bidding on a public construction project, a type of surety bond called a bid bond will likely be required.  (If you're unfamiliar with these bonds, now is the time to review this comprehensive surety bond definition).

The bid bond guarantees that the winning bidder will enter into a contract under the conditions of the bid they submitted and provide necessary contract bonds. Timing is crucial for obtaining bid bonds as contractors must have the bond in hand at the time of their bid.

The bond issuance process will soon be streamlined as bonding agencies begin to offer electronic bonding for bid and other contract bonds. With electronic bonding, contractors will be able to apply, pay and print bond requests in as little as two minutes, saving a lot of time and hassle with mail or courier services – that's time that can be used for bidding, and working, on more projects.

These five technology trends are making the construction industry a lot more exciting.

Which ones are you curious about, and which are you most likely to adopt in your own work?

Lachezar Stamatov has extensive experience in blogging about all surety bond-related topics, with a focus on construction and the surety bonding industry. He is a frequent contributor for JW Surety Bonds.

These 5 Technology Trends Could Shape Construction in 2019