Archer Western will build the concrete plinths that form the running surfaces for the new monorail system. 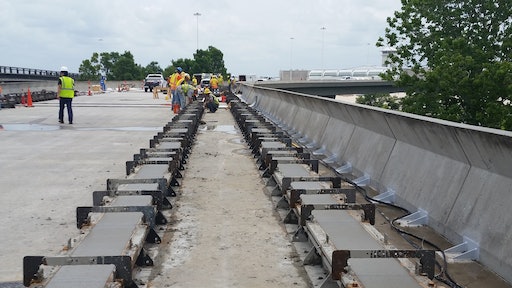 Poured section with forms in place prior to gang-stripping.

All Aboard Florida has named Archer Western Construction to manage the construction for the passenger-rail infrastructure (automated people mover) at Orlando International Airport. Working closely with the Greater Orlando Aviation Authority, Archer Western will be responsible for the construction of the railway, the roadway and related structures for All Aboard Florida’s intercity passenger trains that are scheduled to begin service from the airport in late 2017.

Archer Western will build the concrete plinths that form the running surfaces for the new monorail system. The plinths are roughly 8,000 ft. long with a total of four tracks, some of which vary in height from 9 to 12 in. and others from 12 to 16 in. All of the variances are due to elevation differences in the base. However, the concrete plinths are required to be level through the course to provide level travel.

To accommodate these requirements, the contractor needed special forms that could be adjusted to accommodate the varying concrete depths. Joey Jordan, Project Engineer for Archer Western, found that Metal Forms Corporation, Milwaukee, Wisconsin, could manufacture adjustable paving forms for the Orlando project. In a collaborative effort with Archer Western, MFC designed paving forms to meet the contractor’s needs.

The forms were designed and custom-fabricated with an adjustable front skin that can be lowered and raised to heights of either nine inches or 12 inches (12 inches or 16 inches for the taller form) , as well as any desired size in between. The ends also have a sliding track that helps keep the forms in alignment while they are being adjusted. Each form includes carriage bolts and wing nuts to keep the front skin tight against the base.

All forms were manufactured from 10 ga. steel in 10 foot lengths. Each length incorporates four adjustable top spacers to facilitate gang-stripping. Forms also were furnished in five foot lengths for the radius portions of the job.

All Aboard Florida is the nation’s first privately owned, operated and maintained passenger rail service. This intercity system will connect Orlando and Miami with intermediate stations in West Palm Beach and Fort Lauderdale. It will have 16 daily round trips from each terminal, traveling at speeds as high as 79 to 125 mph.

Scientists created a spray-applied barrier material to replace the SBR-based latex waterproofing Part one of the Vapor Intrusion Mitigation series.
Land Science, a division of REGENESIS
January 15, 2021
Follow Us