Misplaced or misaligned anchor bolts are a common field problem. 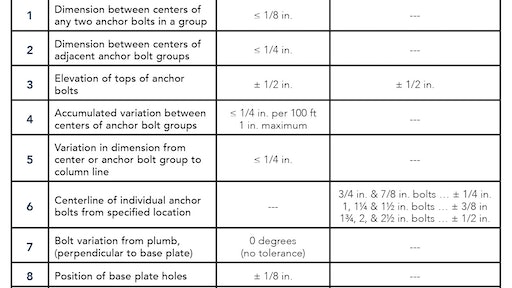 Table 1: Tolerances for Anchor Bolts and Column Base Plates.

For the steel erector, Division 5 of the specifications references AISC 303 “Code of Standard Practice for Steel Buildings and Bridges” while Division 3 of the specifications for the concrete contractor typically references ACI 117 “Specifications for Tolerances for Concrete Construction and Materials”.(1,2) Even though the architect/engineer should clarify and resolve these tolerance differences, concrete contractors sometimes become involved in construction disputes because of the non-compatible tolerances.

As shown in Table 1 and Figure 1, AISC tolerances place limits on the variation between centers of any two bolts in a group (Item 1), centerlines of bolt groups (Items 2 & 4), and centers of anchor bolt group from column lines (Item 5). ACI 117 only specifies elevation (Item 3) and a location tolerance for the centerline of individual anchor bolts (Item 6). As shown for (Item 7), AISC has a very strict or zero plump tolerance for bolts whereas ACI does not specify a plumb tolerance. The only compatible tolerance between AISC and ACI is the top elevation of the bolts (Item 3). AISC’s tolerances combined with oversize holes in the base plates ensure the steel structure can be easily erected without modifying the structure.

For anchor bolts to satisfy both AISC and ACI’s tolerances, Suprenant and Malisch claim anchor bolts must be located within ± 1/16 inch of their specified location.(3) A tolerance of ± 1/16 inch is neither realistic nor achievable. Therefore, it is critical for concrete contractors to understand what tolerance applies to the concrete work – AISC or ACI tolerances? AISC recommends that Division 3 of the specifications require anchor bolts to be set in accordance with the AISC 303 “Code of Standard Practice”.(4) Even using plywood or steel templates to position, align and secure anchor bolts, it is highly unlikely the concrete contractor can satisfy the AISC tolerances shown in Table 1. AISC’s tolerances are too restrictive for standard anchor-bolt placement techniques.

Using AISC’s recommended oversize base plate holes and ACI’s anchor bolt tolerances should allow for easy erection of the steel structure without modifying the structure for 1, 1-1/4, 1-1/2, 1-3/4, 2 and 2-1/2 inches diameter bolts. However, that may not be the case for 3/4 and 7/8 inch diameter bolts.(3) As shown in Table 2, AISC’s recommended oversize-hole diameters for 3/4 and 7/8 inch bolts are too small as compared to oversize hole sizes suggested by ACI.(3,5)

Concrete contractors seldom control the size of the base plate holes. So, don’t rely on oversize holes to mitigate out-of-position anchor bolts. Always take care when positioning, aligning and securing anchor bolts regardless of the bolt size but extra care may be required for 3/4 and 7/8 inch diameter bolts.

Where and How to Measure

As shown in Table 1, tolerances are measured from centers of anchor bolts (individual or groups) and centerlines of bolts. Using these measuring points require estimating the centers which introduce more measuring errors and uncertainties. Also, the accuracy of the anchor bolt location depends on the accuracy of the measuring tape and the layout or reference lines. Too improve layout accuracy, make a plan on where and how to measure and double check your layouts.

How to Position, Align and Secure Anchor Bolts

Use one or two anchor bolt templates securely attached to the formwork to position, align and secure anchor bolts. Dennis Purinton with Purinton Builders, Inc. located in East Granby, Conn. makes plywood anchor bolt templates in the shop as shown in Photo 2. Purinton says it is just important to mark the template alignment relative to the foundation as measuring and drilling the bolt holes in the correct location. For a template to work correctly, use two nuts per bolt with the template sandwiched in between.

For tall bolt projections and to minimize anchor bolt variations from plumb, use two templates. The bottom template should be located close to the concrete and the top template located near the top of the anchor bolts. Similar to a single template, use two nuts per bolt per template.

If necessary, reposition steel reinforcement that interferes with anchor bolt location or alignment. If the reinforcement cannot be repositioned or will not meet tolerances after repositioning, contact the architect/engineer. Be sure templates are stiff enough not to deflect and securely attach templates to the formwork. After installing, recheck the location and alignment of the anchor bolts.

Of course, the type of repair depends on how much the anchor bolt or group of bolts are out of position or how much an individual bolt is out of plumb. Below are some repair options for different conditions:

a)    For anchor bolts misplaced by less than one bolt diameter, field cutting to enlarge or slot the corresponding holes in the steel base plate is the best option.

c)    Depending on the situation, it may be possible to cut off the base plate from the column and install a new base plate that accommodates the misplaced anchor bolts.

d)    For misaligned or bent anchor bolts (Photo 3) that will not allow the base plate to fit over the bolts, consider bending the bolts into position. Chip away concrete to allow for an “S” bend and cold bend the bolt. Typically, only Grade 36 bolts should be cold bent and the bend should be limited to 45 degrees or less. Bolt diameters up to about one inch can be cold bent and bolts exceeding one inch can be heated as directed by the architect/engineer to make bending easier. After bending, bolts should be inspected for cracks. If needed, bolts can be load tested to verify tensile strength.

All methods for relocating, realignment anchor bolts or base plate modifications require the approval of the architect/engineer. The Code of Federal Regulations, 29-CFR Chapter XVII, Section 1926.755 (B) for column erection stability, states:

a)    Anchor rods (anchor bolts) shall not be repaired, replaced, or field modified without the approval of the project structural engineer of record.

b)    Prior to the erection of a column, the controlling contractor shall provide written notification to the steel erector if there has been any repair, replacement or modification of the anchor rods (anchor bolts) of that column.

In closing, be sure to understand what anchor bolt tolerances apply to your job, use either single or double templates with double nuts to position, align and secure the anchor bolts. Before placing concrete, recheck the anchor bolts for proper location and alignment.