Finding efficient, cost-effective ways to limit sound pollution is a major priority for contractors and hydrodemolition is gaining popularity for noise-restricted jobsites in concrete removal and surface preparation applications. 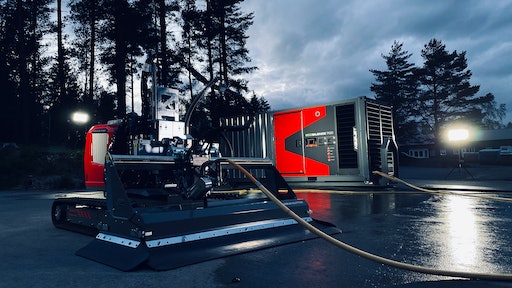 As part of a well-designed sound abatement plan, hydrodemolition—and the latest silent-running high-pressure pump system—allows contractors to protect workers and the public from dangerous noise levels, while providing productivity above and beyond that of traditional handheld equipment.
Aquajet

Like the air we breathe, sound is an important, yet often overlooked, part of our daily lives. Just as air quality and its effects on health have become an important part of the safety conversation, the negative effects of sound exposure on employees and the public are a growing concern in certain industries—with construction and demolition key among these. Though vital to society’s continued progress, the excessive noise produced by erecting, remodeling, or demolishing structures contribute to a number of health concerns, including stress, hearing loss, cardiovascular disease, and cognitive impairment.

With pressure mounting from all sides, finding efficient, cost-effective ways to limit sound pollution has become a major priority for contractors. But sound-proofing an active jobsite is easier said than done. Incorporating sound abatement techniques can reduce decibels, but there is no way to completely eliminate the biggest onsite noise polluters—machines. Contractors have begun looking to innovative manufacturers for creative equipment solutions to stem the noise.

While hoarding works well, it takes extra time and resources to set up and often needs to be moved with the machinery, limiting productivity. This is even more true on crowded jobsites where even stationary equipment might need to be moved frequently.

Hydrodemolition is gaining popularity in concrete removal and surface preparation applications as a method that not only decreases decibels compared to handheld pneumatic breakers and other traditional removal techniques but also offers a number of benefits in safety, productivity, and the environment. Hydrodemolition robots and silent-running support equipment allow contractors to crank up the volume on efficiency without disturbing the neighbors.

With construction and demolition operations taking center stage in noise pollution discussions, it’s no surprise significant restrictions are being put on contractors by government agencies to protect workers and the public.

There is no denying that demolition and surface preparation applications are noisy and that some traditional techniques, such as handheld pneumatic devices, operate at unhealthy decibel levels. The amount of noise depends on a variety of factors, such as whether the project is taking place in an open or enclosed environment and the condition of the material being removed. However, when taken alone, these machines operate at the same or only slightly higher levels than many common, everyday noises. For example, handheld pneumatic devices and concrete saws operating as part of a road or bridge repair project register around 100 dB—about the same as a lawnmower or snowblower.

Hydrodemolition robots, on the other hand, typically operate about 10 dB lower, greatly reducing the overall noise pollution. Given the same road and bridge application, this would be about as loud as a passing motorcycle or subway train. The quieter operation is thanks in part to a heavy rubber hood over the demolition area that helps protect workers from flying debris but also dampens sound. While it doesn’t decrease the overall decibel level the machine produces, remote operation increases sound safety by keeping workers at a distance. 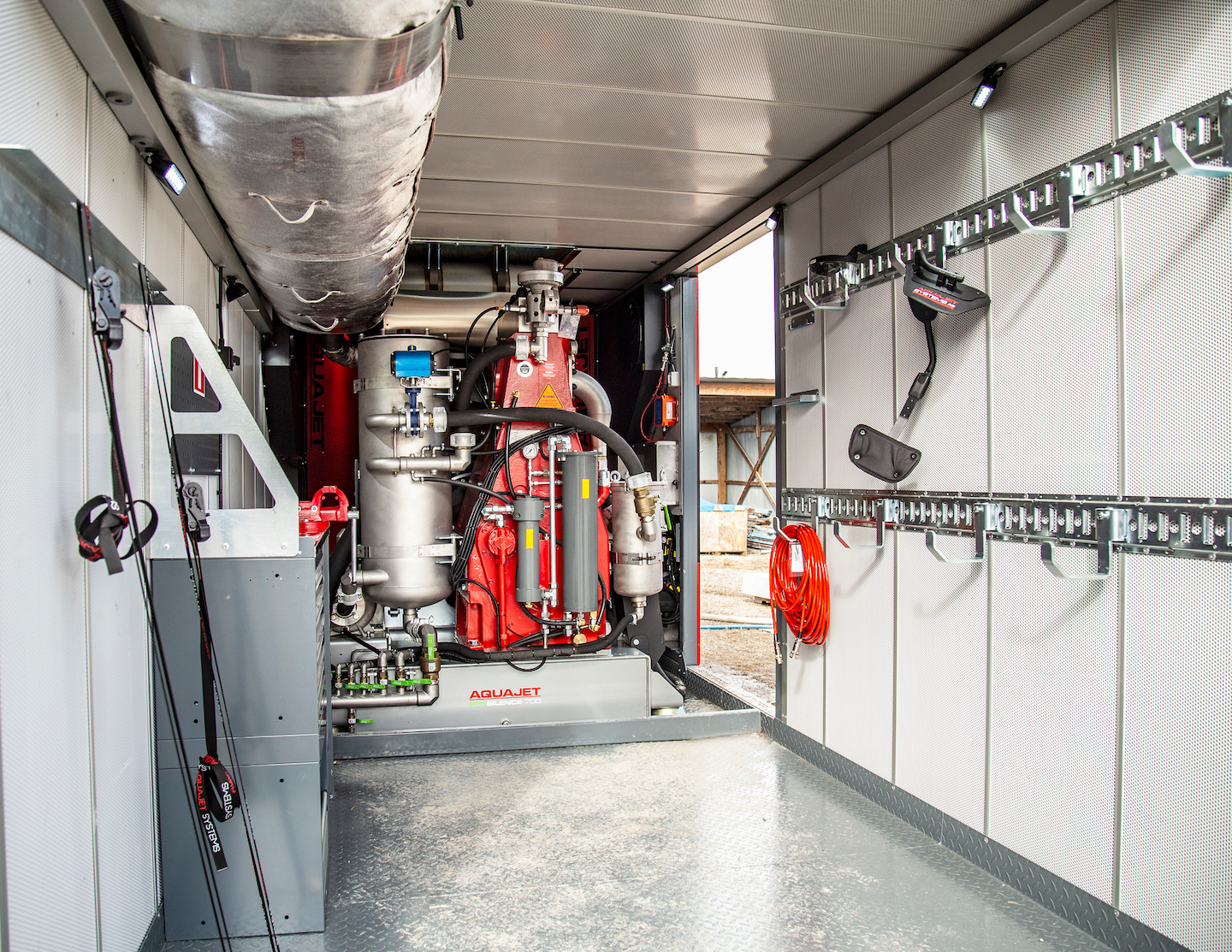 Today’s innovative high-pressure pump designs often include a skid-mounted combination engine and high-pressure pump contained within a shipping container built with advanced sound-absorbing cassettes.AquajetEven if a piece of equipment is quiet, its support equipment may not be. Though necessary, support equipment can increase overall noise pollution and make sound abatement difficult for contractors and project managers. The high-pressure pump that powers hydrodemolition robots is a perfect example and one that needs to be considered carefully. Though the robots themselves are quieter than traditional concrete removal methods, most hydrodemolition contractors use a diesel-powered, trailer-mounted, high-pressure pump setup that is as loud or even louder than the robot. This can jeopardize contractors’ ability to meet sound regulations in urban environments and negate the benefits of the quieter Hydrodemolition equipment. As a result, it’s important to evaluate features that can allow equipment to run silently and meet even the most stringent noise restrictions.

One of the more common methods for reducing jobsite noise is to add temporary solid barriers—referred to as hoarding—around the work area or in a tight perimeter around the loudest equipment. The resulting physical shield helps to limit how much jobsite noise escapes to the surrounding area. While hoarding works well, it takes extra time and resources to set up and often needs to be moved with the machinery, limiting productivity. This is even more true on crowded jobsites where even stationary equipment might need to be moved frequently.

Some of today’s innovative high-pressure pump designs solve this problem by incorporating hoarding into the equipment itself for a self-contained system designed to reduce decibel levels to almost the point of normal conversation. These sound-limiting pump systems often include a skid-mounted combination engine and high-pressure pump contained within a shipping container built with advanced sound-absorbing cassettes. Though enclosed designs require a muffler to vent the exhaust to the outside, engineers are able to incorporate exhaust silencers to limit low-frequency engine sound. 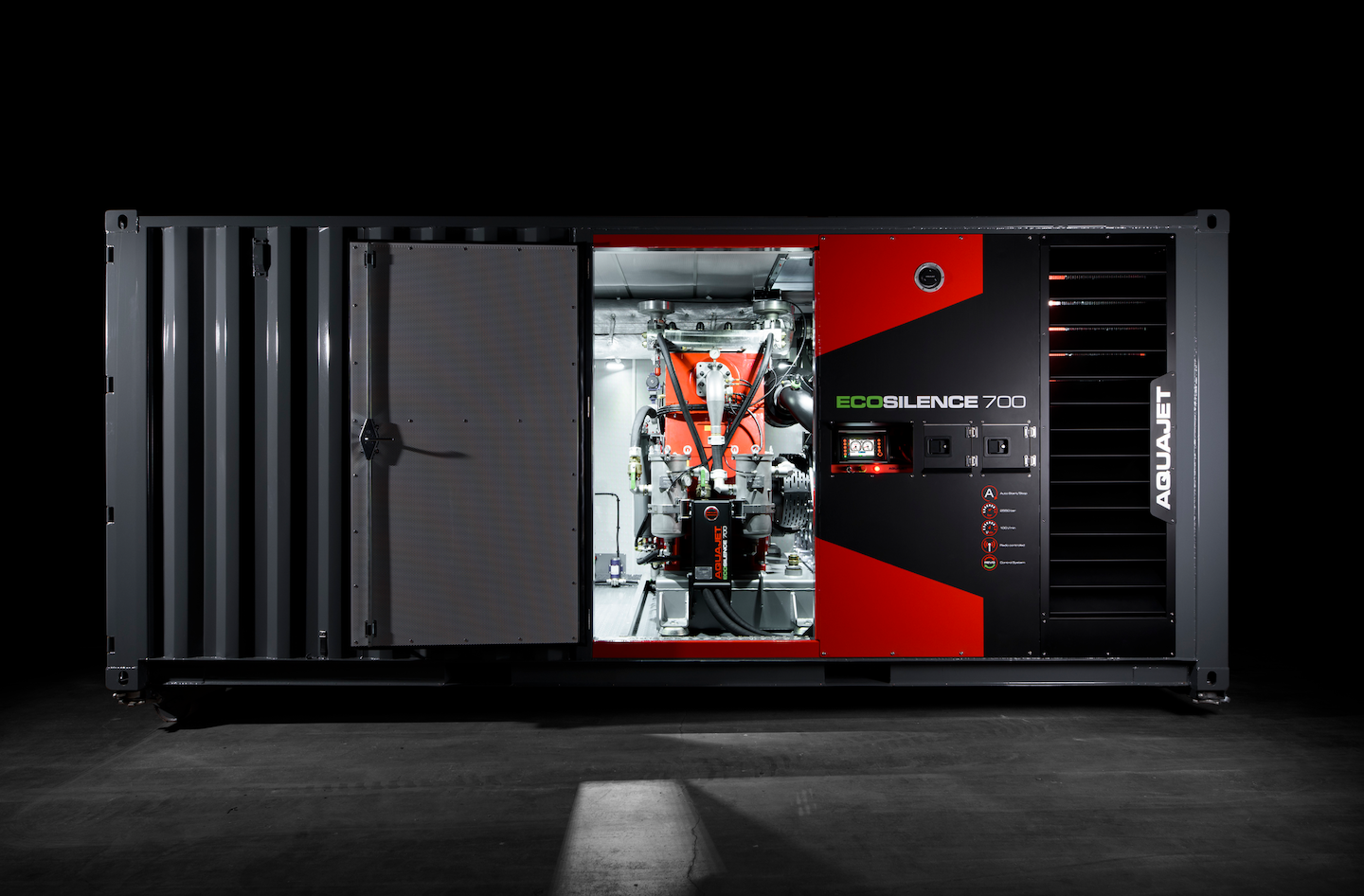 Enclosed high-pressure pump designs require careful considerations for how the sound-limiting features affect other areas of equipment operation, such as cooling systems. Placing the engine and pump within a container also isolates heat, which can be detrimental to the machinery if not properly separated. However, modern designs can combat this by incorporating new cooling technology like innovative liquid-to-air cooling systems allowing for efficient heat transfer with less noise. Electric speed-controlled fans can circulate external air through sound absorbing vents as part of a heat exchanger that covers the entire front of the container.

These innovations allow operators of enclosed systems to run the unit with doors and air vents closed, further limiting external sound. This also prevents debris or outside air from entering the engine chamber during operation, permitting use in harsh environments such as harbors or cold weather. 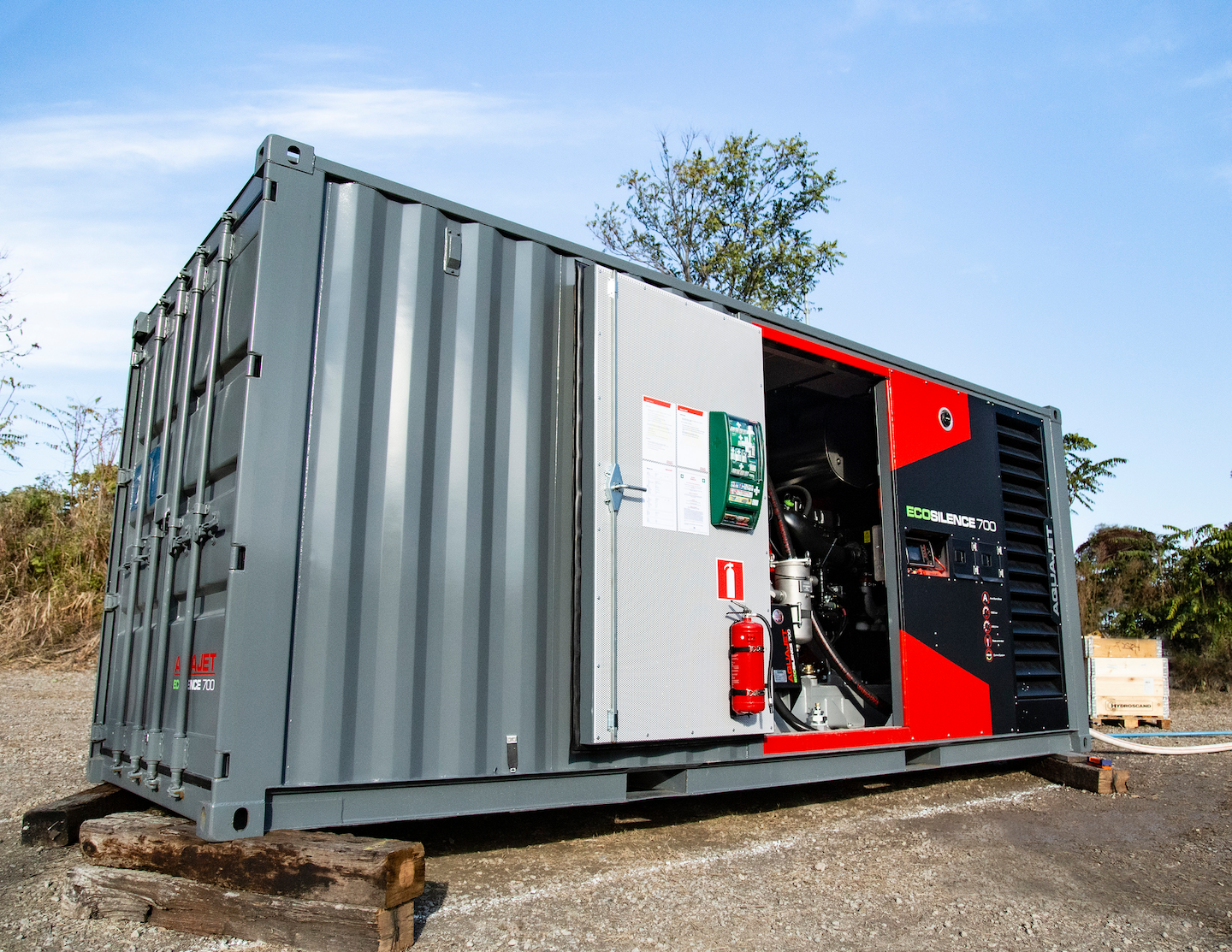 A silent-running high-pressure pump system provides more flexibility when it comes to where it can be set up. On an urban operation this might be close to a building or even under a window.AquajetDesigning equipment with a focus on one feature or solving one challenge has long resulted in sacrifices in other areas of the system. However, today’s advanced engineering considerations allow for more well-balanced designs. Enclosed high-pressure pump systems reduce noise, but also offer a number of other benefits for today’s urban jobsites.

A silent-running high-pressure pump system provides more flexibility when it comes to where it can be set up. On an urban operation, this might be close to a building or even under a window. Trying to do the same with uncontained high-pressure pumps in a noise-sensitive environment can result in complaints, limited productivity due to amended operating hours, and even elimination from future bidding opportunities. Compact, self-contained units also require much less time and fewer resources to set up, thanks to their existing hoarding systems, saving time and resources with every relocation.

This productivity boost continues during operation. Advanced systems require little to no direct oversight during operation, allowing crews to focus on the job at hand, rather than the support equipment. This also limits worker exposure to the machine’s loudest components. Some have state-of-the-art remote-control systems that command primary operation, as well as provide detailed information on systems and status. External lighting systems can visually communicate both information and warnings. These features allow workers to perform almost all necessary adjustments during operation from outside the container and even from a great distance.

As part of a well-designed sound abatement plan, hydrodemolition—and the latest silent-running high-pressure pump system—allows contractors to protect workers and the public from dangerous noise levels while providing productivity above and beyond that of traditional handheld equipment. These benefits open up a wealth of new bidding opportunities for contractors, by granting them access to even the most sound-restrictive jobsites.

It’s time to turn down the volume on concrete removal and surface preparation applications. Noise restrictions will only continue to increase as jobsites move further and further into heavily populated urban environments. Investing in quieter methods not only ensures contractors meet current regulations but promises long-term options as the construction and demolition landscape continues to evolve.

Protecting Yourself from Noise in Construction

The players driving sustainability and reducing carbon emissions within the cement and concrete industries.
Gigi Wood
December 21, 2020
Follow Us