This innovation in concrete sawing puts the blade on your skid steer – enhancing your mobility, and worker safety. Project profile of its use at the Kuwahee Wastewater Treatment Plant in Knoxville, Tenn. 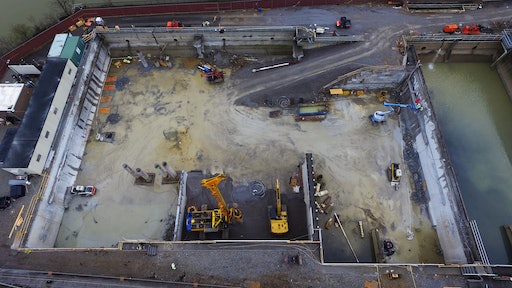 Sitting feet away from the Tennessee River, the Kuwahee Wastewater Treatment Plant in Knoxville, Tenn., needed renovation of one of their holding tanks for the construction of a building above. Hundreds of micro piles were required for support—each one needing cutting and drilling into a 15-in. thick slab. The plant is the main processing location for the waste waterways of the city, pumping fresh water back into the river.

A seemingly straightforward job until you consider the persistent water that seeped back into the area through every cut, every hole. While the jobsite was continuously pumped, the pumps were not able to keep up. Working approximately 30 ft. below water level, cutting the concrete meant working in standing muddy water. Not only did the job require a significantly sized saw blade but it also required a solution to keep workers up and out of the water. After another contractor wasn’t able to accomplish the demolition, Cuts Inc. was hired to utilize its Skid Steer Saw.

Keep Your Feet Out of the Muck

“We started flat sawing the holes, but by the time we got all the water and stuff in there, the drilling contractors putting the piles in came in and started drilling. Their soils and waste were coming out. And by the time we got a third of the way through the job, there were six to eight inches of muck and mud in the bottom of the tank. They could hardly keep up the cleaning and get it out,” explains Matt Hephner, president and senior estimator of Cuts Inc. 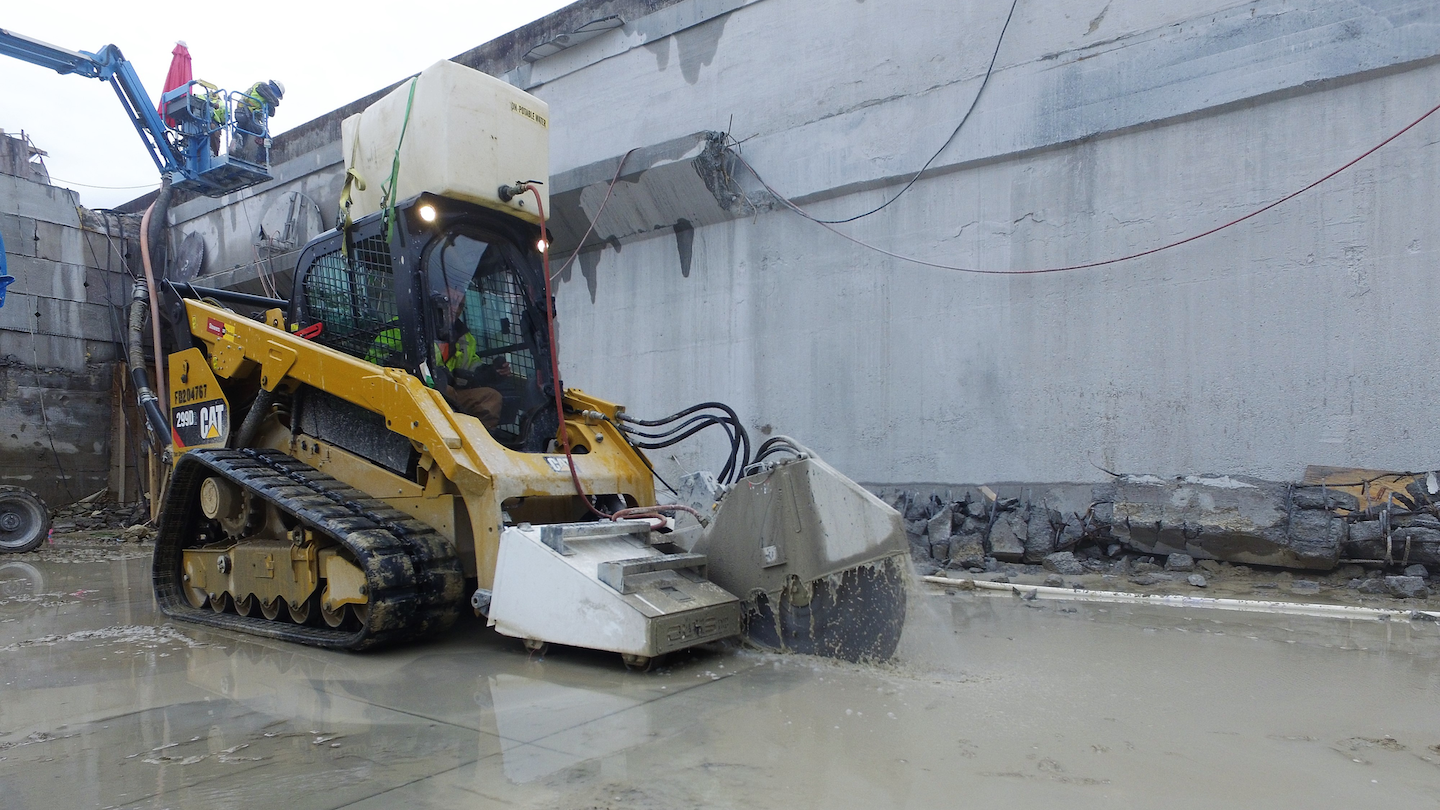 Using diamond sawing tools, Matt Hephner started the first sawing and drilling company for the Knoxville, Tenn. area back in 1989. In 2004, he then sold that company to a partner and started Cuts Inc. “We offer all kinds of concrete and asphalt and block-and-brick demolition—all done with diamond sawing tools. Cuts Inc. has built a reputation on finding unique solutions to difficult or challenging jobs,” he says. Matt runs the company with his son Matthew Hephner, Cuts Inc.’s vice president. The small company keeps roughly 14 to 15 people on staff.

Along with providing demolition and cutting services, the company also sells the Skid Steer Saw, a skid steer-mounted hydraulically-powered diamond saw. The machine itself draws its power from the skid steer. 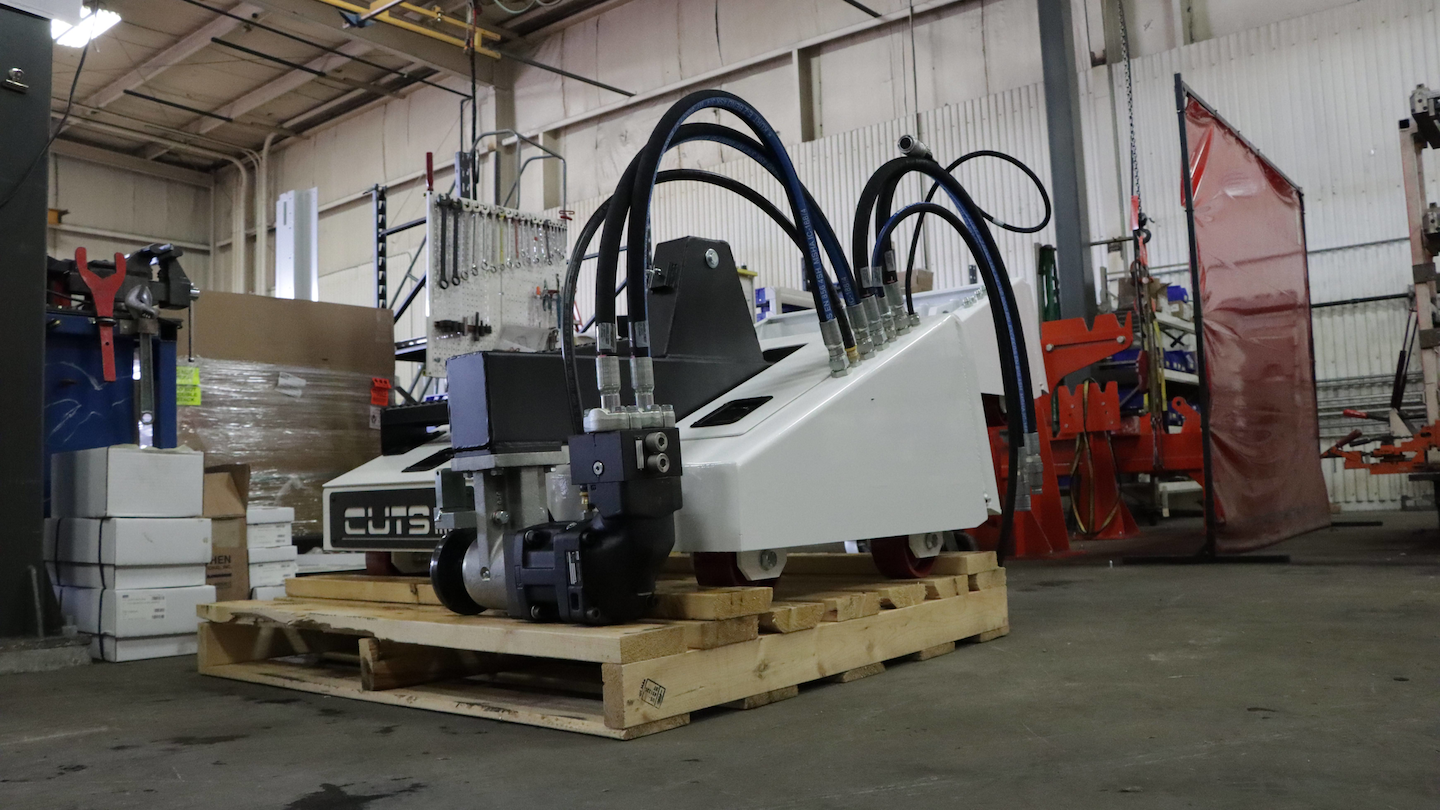 Each Skid Steer Saw is assembled by hand. In the beginning by the Hephner's themselves but today by a single individual in an unassuming industrial park in Appleton, Wisc. With corporate headquarters based in Minneapolis, Minn., the vertically integrated manufacturer Lake Air Products provides precision metal fabrication, painting, and finishing, metal stamping, welding, and assembly. The Appleton location is roughly a 20,000-sq.-ft. facility (and looking to soon double that space). Each customer has a dedicated assembly cell. Meaning that each Skid Steer Saw comes out of the same 40- by 40-ft. area set up for that one product. The building is packed with industrial machinery in various stages of assembly; the sounds of drills, air-powered impact tools, and hard work fill the air. 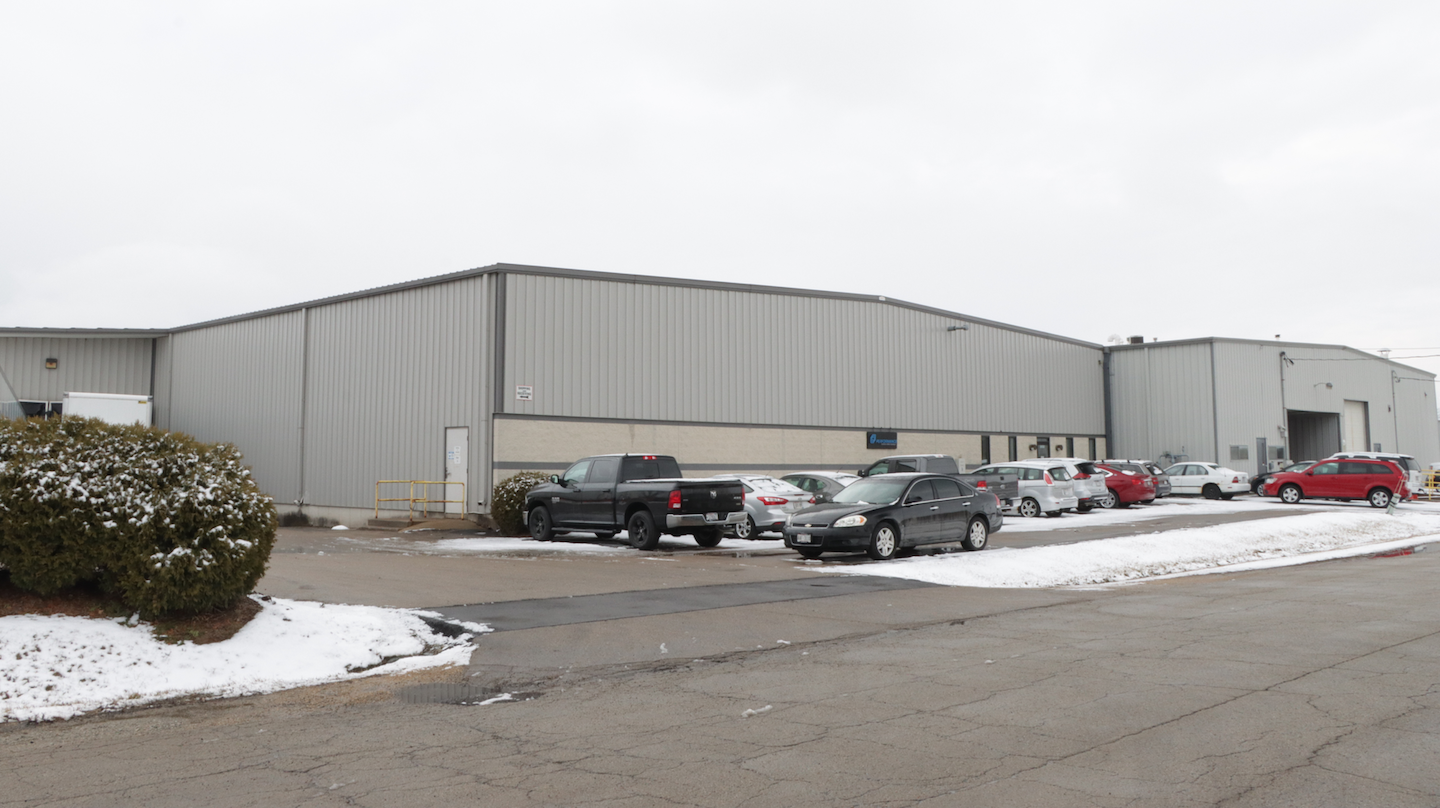 This hard work pays off, Lake Air Products does around $8 million in sales per year. While a big company, they’re able to keep a small company sensibility—giving them the ability to give special attention to each customer.

Having a dedicated worker for Cuts Inc. allows the specialty manufacturer to protect its quality control of the manufactured unit out the door. Each Skid Steer Saw is made of 0.25-in. 836 steel with a hidden tubular subframe. Two lockable maintenance covers protect standard hydraulic SAE connections and the hydraulic manifold. Custom-length 0.5-in. 5,000- and 6,000-psi hydraulic hoses are cut special to attach to your skid steer to be as plug-and-play as possible. (A wiring adapter may be required depending on the model of your skid steer.)

In 2019, the company was invited to compete in a competition at the Bauma tradeshow, held in Munich, Germany (which was recently postponed to Oct. 2022), known as the world's largest tradeshow. The competition was held by the International Association of Concrete Drillers & Sawers (IACDS), it searched for the "best new concrete sawing and drilling technology." Of the many submitted offerings from around the world, the competition came down to a six - the Skid Steer Saw was one of them. Unfortunately, while Matt Hephener did attend that year he did not win but did receive the "Diamond Award" for recognition as a contestant. The BRAUN Bridge Wire Saw from BRAUN Maschinenfabrik GmbH was the product category winner.

Having the saw mounted to a skid steer allows you the mobility to take it anywhere a skid steer can go—not to mention placing the concrete contractor behind safety glass and up off the ground. This means that you can safely work in potentially dangerous environments like the murky water of a concrete tank in a water treatment facility just off of the Tennessee River. 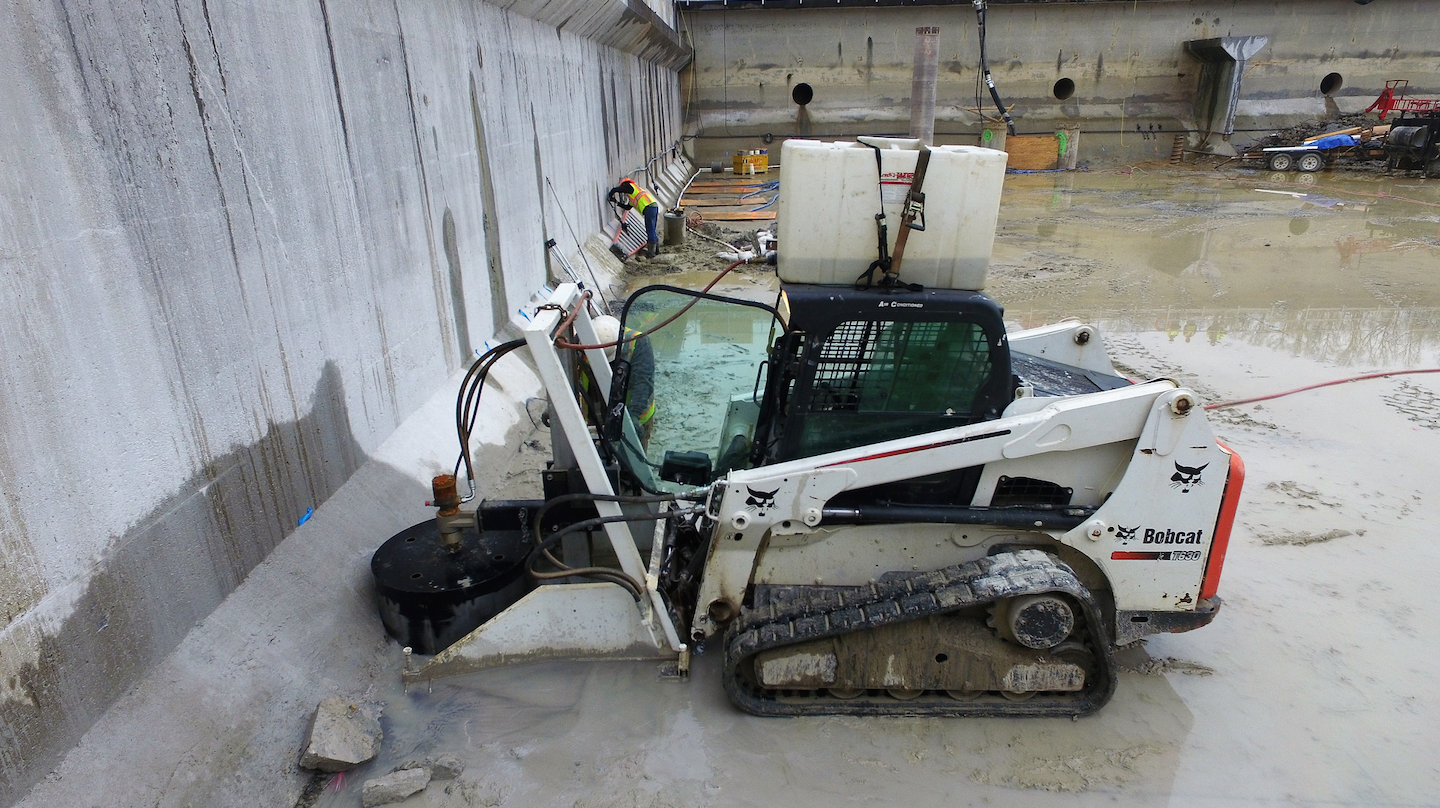 Cuts Inc.The Kuwahee plant job required the cutting of about 146 four-foot squares and 45 36-in. dia holes for the 191 micropiles into 15-in. concrete, heavily reinforced with 1.25-in. rebar. A separate grouting contractor drilled deep pylons which caused the grout to mix with the already muddy water making it impossible for Cuts Inc. to see the floor for the cuts. They used a flag to mark the location of each square. Additionally, 36-in. diameter by 36-in. deep holes needed to be drilled around the outside edges. Three skid steers were used, one with the Skid Steer Saw, a second with a drilling attachment (which Cuts Inc. also provides), and a third for clean-up.

The skid steer’s mobility was a major key. “They had three big trailer-sized pumps trying to pump the water out at the same time,” explains Matthew Hephner. “If any one of those went down, we had to pretty much evacuate the area." Despite unforeseen downtime, the Hephner's crew averaged to about 12 squares a day (ranging from six to up to 20 on another).

This mobility also comes in handy with responding to high-value needs, like an airport runway.

For one, Shane Webb the avionics construction manager from Avionics Limited, an Australian-based contractor who specializes in the installation of the lights that one sees on the runway. Webb utilized the saw for the work done at the Melbourne Airport for a lighting system upgrade to replace all airfield ground lighting at the location to make it compliant to Australian standards.

This involved 3,000 light fitting locations and 35,000 m of slot cutting, ranging in size from 15 mm by 30 mm to 35 mm by 30 mm, explains Webb. Learning of the Hephners' history, he recognized Cuts Inc.'s understanding of "the complexities of saw cutting and have been able to incorporate this understanding into their design." Thus far, adds Webb, the attachment has exceeded their expectations. The saw also caught the attention of the U.S. Military, who are currently reviewing the Skid Steer Saw for rapid runway repair for damaged runways. This evaluation is still ongoing.

Designed by cutters with decades of experience, each purpose of every feature of the Skid Steer Saw is evident that care and know-how went into the design. Cuts Inc. places the added safety front and center. Placing the heavy work on the heavy machinery, the attachment takes the back strain out of the picture not to mention putting the employee behind the skid steer's safety windows. It's this safety that affords the machine to get them into jobs that normally would be more of a challenge. For example, contractors for places like nuclear plants may require a low EMR rating.

"As a concrete cutter, [safety is] something that's very important to us," Matt Hephner says. "We're always doing what we can in the way of safety training and safety products here and finding new safer methods to do what is normal is a pretty difficult job."

How to Create a Saw Safety Plan