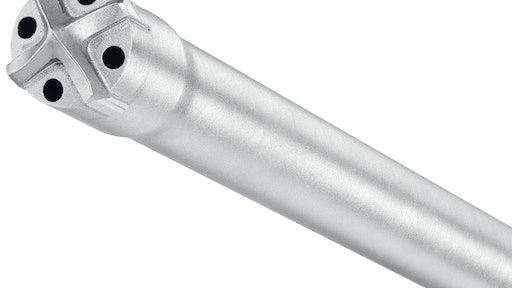 New TE-CD and TE-YD Hollow Drill Bits used in conjunction with a vacuum clean themselves. Dust is removed by the vacuum while drilling is in progress for faster drilling, longer bit life and a virtually dustless working environment. This new anchoring method is only allowed with Hilti HIT-HY 200 adhesive.

The new Hilti HIT-Z, zero-cleaning rod, with its cone-shaped helix, works as a torque-controlled anchor and requires no hole cleaning. When used with HIT-HY 200 adhesive, the unique shape of the HIT-Z Anchor Rod allows it to be installed in a standard (hammer drilled, dry or water saturated concrete, above 41 deg F), uncleaned hole.

The current industry standard installation method uses compressed air and a wire brush to clean the drill hole. Like all Hilti adhesive anchors, HIT-HY 200 can be installed using the traditional blow-brush-blow method. Because HIT–HY 200 only requires two blows of compressed air, two brushes and two more blows of compressed air (2x2x2), it is faster to install than other adhesives on the market that require at least a 4x4x4.

Hilti HIT-HY 200 Adhesive Anchor System and Safe Set Technology is pending ICC-ES approval for use in all seismic zones and uncracked and cracked concrete.

Anchor Threaded Rod and Rebar into Uncracked Concrete with Poly-Grip

While the hot-hipped galvanized wedge anchor should never be installed into soft, hollow base materials, their hot-dipped galvanized coating is excellent for use in moist atmospheres.
Concrete Fasteners Incorporated
January 16, 2018

Pentair offers the LENTON A22 High Strength Coupler for use with ASTM A615 Grade 100 Reinforcing Steel.
Pentair
September 15, 2016
Follow Us