Bauman Landscape and Construction has embraced next-gen volumetric mixing technology to place concrete for some of San Francisco’s most important infrastructure. 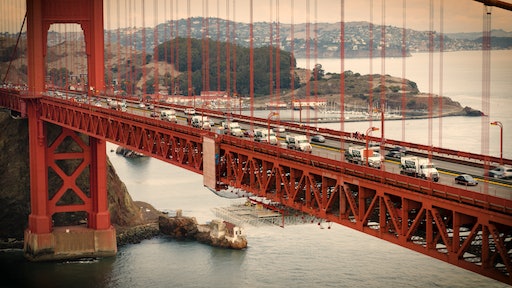 Bauman Landscape and Construction Inc. has helped build some of San Francisco’s most complex and iconic cityscapes. From the Palace of Fine Arts to Dolores Park to the city’s Embarcadero, the contractor has been placing concrete in The Golden City for more than four decades.

The company’s success in the Bay Area has been built on a foundation of obsessive quality, efficiency, and a willingness to trust new innovations and technology. One of the most significant innovations Bauman has embraced is volumetric concrete mixing technology. When Bauman started using volumetric mixing technology, the trend was still in its infancy, but the City of San Francisco quickly realized the company was able to deliver concrete faster and more reasonably than their competitors who were still using traditional barrel mixers.

In addition to being high-quality, quick and on-budget, Bauman boasts another feature that sets them apart: It’s green initiatives. San Francisco, well-known as a hub for sustainability, appreciated Bauman’s ability to take any unused concrete back to their yard, crush it and re-use it as concrete aggregate. 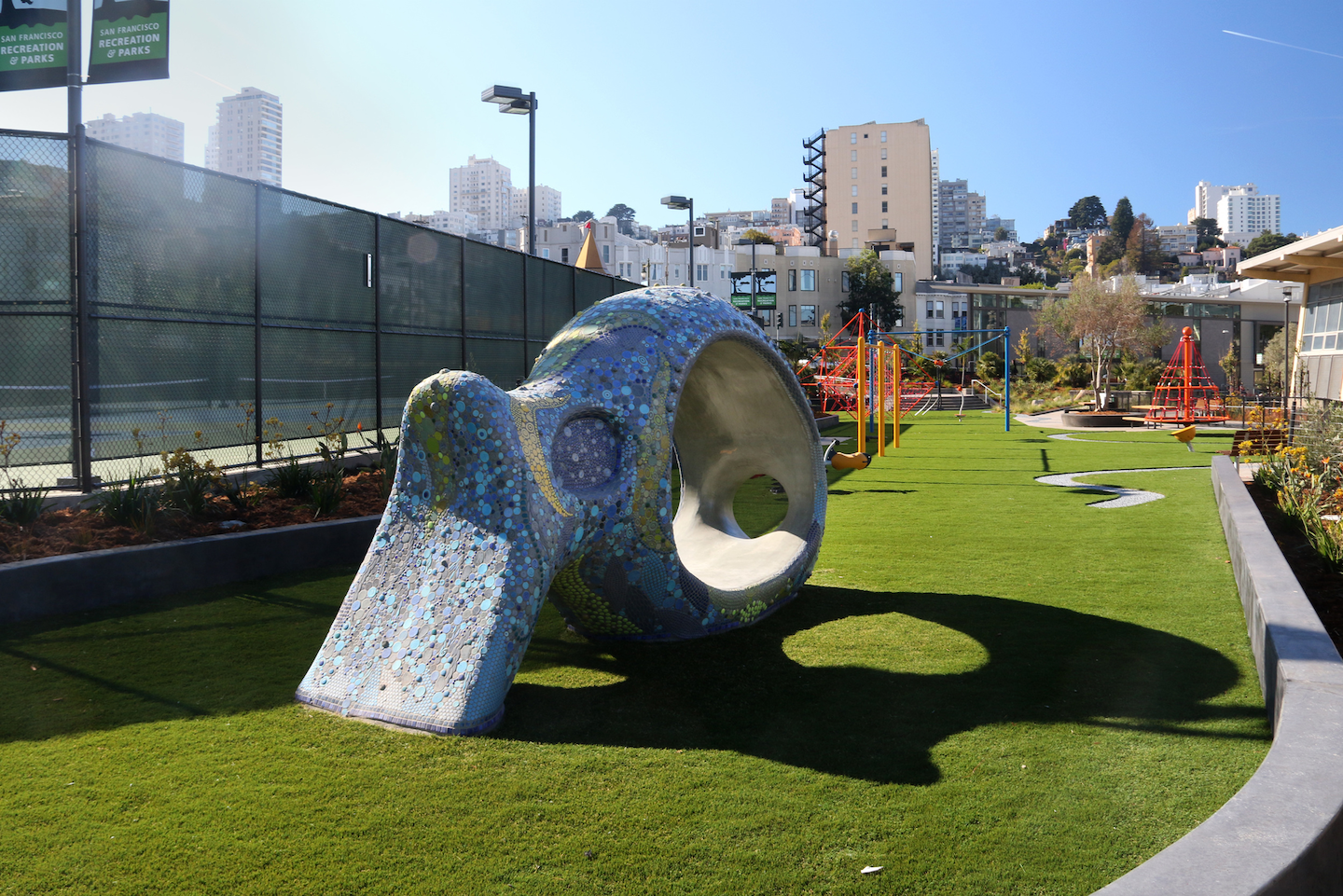 Detail of the Joe DiMaggio North Beach Playground, another example of Bauman’s contribution to San Francisco's many parks and public spaces.Cemen Tech

“That was huge in the city,” says Mike Bauman, CEO of Bauman Landscape and Construction. “They require everything to be recycled, and we are pretty green as far as recycling and reusing the concrete.

“We are the first company [in San Francisco] to use 100 percent recycled aggregate in our mix. The barrel mix guys use about 50 percent,” he adds.

But the company’s success didn’t set-in overnight. The city, which hires Bauman’s company to place streetscapes, curbs, gutters, as well as structural walls and building slabs, required the company to do test placements before each load out of the mixer, says Bauman. After some test runs and some solid test results, the city gave Bauman the full green light.

“They were so used to barrel mixers,” he adds. “Since we were the first ones out here with the volumetric mixers, now we have a great reputation with [the city]. They like our mixers, and they like the mix better than the barrel mixers.”

Time for an Upgrade

In 2017, Bauman identified a few soft spots in his equipment and was ready to make some serious upgrades. His previous volumetric mixers required skilled concrete operators who were becoming harder to come by and experienced recurring issues with bent, broken or faulty chutes, which caused downtime.

The contractor turned to Cemen Tech to deliver four initial C60 mobile concrete mixers to help streamline their operation, increase efficiencies on-site and in their driver hiring, while also minimizing downtime. With the Cemen Tech C Series mixers, Bauman’s team was able to batch, measure, mix, pour, record and analyze each job with just the onboard equipment of the machine itself. Additionally, the ability to load a variety of different mix composites made toggling back-and-forth between jobs or within the same job a breeze.

“The C60s we have equipped with the liquid color, which is great because everything we do out here is color; even the simple sidewalks have color in them,” explains Bauman. “We probably have 25 mix designs pre-loaded because of all the different type of work that we do out here.

“They pretty much run themselves,” he adds.

You don’t hold a reputation for excellent, reliable work for more than 40 years without taking quality control seriously. That’s where Angela Bauman comes in, the company’s lead project manager who has a passion for process improvement, quality control and efficiency.

In addition to Angela, the company also has a full-time quality control person on staff who is responsible for running in-house testing before mixes go out for placement. With the Cemen Tech mixers, once the mixes are tested and approved, Bauman’s team can make a single run and knock-out a multi-mix job. 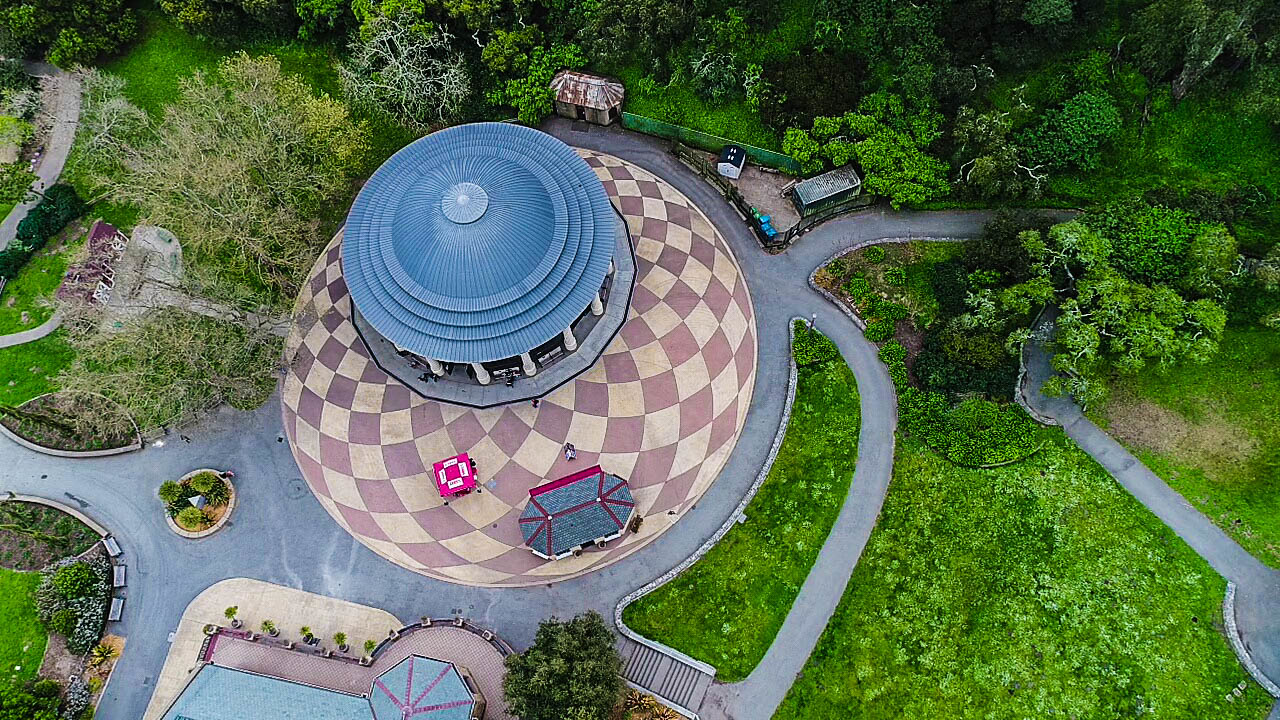 Aerial detail of the carousel at Golden Gate Park. Bauman Landscape has worked on many of San Francisco’s most iconic parks and cityscapes.Cemen Tech

“One huge benefit for us in the city are the streetscapes. We do a lot of streetscapes, and the curb, gutter and sidewalks are all different mixes,” Angela says. “We used to have to get three short loads just to pour a curb ramp, so now with the Cemen Tech mixers, we can just change the mix three different times in one truck and pour the entire thing.

“That has been absolutely awesome for us, because we do streetscapes everywhere, and that has just been an incredible advantage,” she notes.

The speed with which Bauman is able to complete jobs nearly rivals the quality of their work. On a recent job on Chestnut Street in the northern tip of the city, Bauman Landscape and Construction was responsible for completing the entire baseline of the project. When they quoted the city with their proposed timeline, the city was skeptical.

“They said, ‘We don’t think you can do it that quickly,’” Angela recalls. “We were beating the schedule by almost a year. And, sure enough, we did, and it was awesome.”

Across the country, companies of all types, sizes and geographic location are struggling to hire and retain professional drivers, much less good ones. It’s a trend not expected to subside, and many analysts believe the shortage could as much as triple by 2026.

With Bauman’s original equipment, which was tricky to operate and resulted in more downtime than the company could swallow, highly-skilled operators became even harder to come by. Now, Mike Bauman says, the Cemen Tech machines have made that hurdle much easier to clear.

“It is incredible because now we can take a UPS driver and put them in a C60, and they could run it,” he says. “It’s a real benefit for us. It is tough to find good quality people, so we have to pay over scale, but we are able to lure away good quality drivers from other companies to work for us now.”

Part of what makes the vehicles so easy to operate are their electronic control panel that gives the user total control over how much is placed and which mixture is being used. The Cemen Tech C60 units are also equipped with Auto-Washout™ and Auto-Stow™ features for easy transportation and clean up, as well as the ACCU-POUR™ options.

ACCU-POUR is a suite of cloud-based, wireless productivity solutions that allow Bauman to blend the everyday details from dispatch to completed jobs to a holistic view of their business operations.

Cemen Tech also provides on-site training for both mechanical and maintenance training, as well as driver training. Now, the drivers who went through the initial round of training are able to train any new drivers who join the Bauman team.

The relationship between Cemen Tech and Bauman has been mutually-beneficial. As one places foundational elements in one of America’s most iconic cities, the other continues to press-forward with innovative technology and customer support that keeps their customers running on all cylinders.

Volumetric concrete mixing technology has given Bauman Landscape and Construction a distinct advantage on their home turf. It’s an advantage they don’t expect to be relinquished soon.

“Even though it was hard to get the city to open their eyes to volumetric mixers…we took a leap of faith and they did,” Angela Bauman says. “The city ever since then is convinced.”

During every step of the way, both organizations have worked together to guarantee success.

“The immediate customer service, you need that support, especially when you are new to a product,” Angela adds. “You want to be able to call someone and have them make you feel good about what you are purchasing and make sure they are going to be on board if something were to happen, or if you need the additional support or training.

“Cemen Tech has done that and have followed-through in more ways that we could have ever thought.”

Kris Moorman is the marketing manager at Cemen Tech Inc.