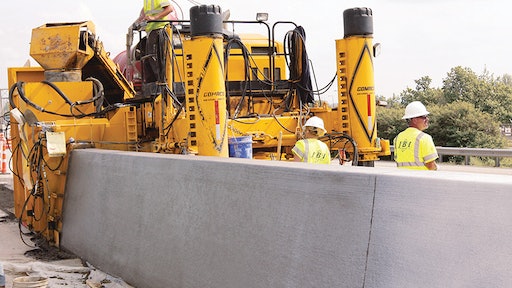 JBI Construction had their entire company and three of their GOMACO slipform pavers at work on the project, including their four-track Commander III.

Construction on I-65 in Louisville, Ky., required the removal of the existing 32-inch-tall barrier wall and replacing it with a 50-inch single slope barrier wall. All of the work had to be completed in just nine days. Contractor JBI Construction, Evansville, Ind., had only seven days to slipform the new 12,000 linear feet of concrete wall.

Work was scheduled to begin the week before Easter Sunday, which shortened JBI's seven day work week to six days so many of the members of the JBI crew - a family-owned company - could be home to celebrate the holiday.

The success of the project had to begin during the pre-planning phase. JBI would bring its GOMACO equipment, three machines in total, to the site for slipforming the safety barrier. The GOMACO machines included a three-track Commander III, a four-track Commander III and a GT-6300. The Commander IIIs featured new GOMACO-built barrier molds with a profile that was 50 inches tall, with a 12-inch top width and 30 inches wide across the bottom. The molds were also equipped with a hinged door on the front that hydraulically raises or lowers. Sigler worked closely with GOMACO engineers before the project was let, finalizing the mold design. Once word was received they had won the bid, GOMACO immediately began production on the molds.

JBI needed to average 2,000 feet of barrier wall per day to complete the project in just six days. “We were facing hourly penalties up to $690,000 for not completing on time,” said Tim Sigler, vice president and general manager of JBI Construction.

JBI brought the entire company to work on the 4.2-mile section of I-65 that stretched from downtown Louisville to the I-264 Henry Watterson Expressway interchange. They were divided into three crews placed on the north, south or center portion of the project. Each crew was only allowed the one lane in each direction to work in. Working conditions were a challenge with minimal space to get ready-mix trucks in and out as thousands of vehicles passed by the JBI slipforming crews.

“The concrete is a state of Kentucky Class A curb mix that has undergone a little bit of tweaking to make it better at this low slump,” Sigler said. “We also made it a little bit better for slipforming barrier wall.”

The new wall was slipformed over a large trench left over from the removal of the existing barrier. Careful placement of the vibrators within the mold was a consideration for proper concrete consolidation in the trench for a solid foundation for the barrier wall.

There was no steel reinforcing in the single slope barrier wall. The only steel was located at inlet boxes placed for drainage underneath the new wall. The hinged door on the GOMACO molds could be hydraulically raised to clear and slipform over the inlet’s steel reinforcing. Once the mold had cleared the steel, the operator simply hydraulically lowered the door again, never having to stop forward progress.