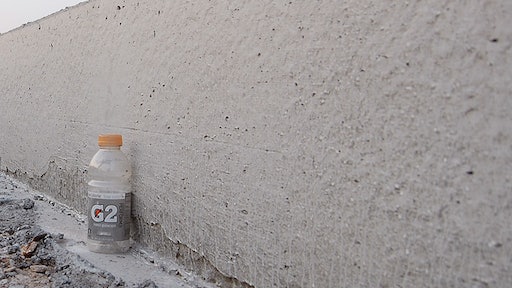 The GOMACO edge on the airport's new 17-in.-thick runway.

The removal and replacement of 750 feet of intersection where the two main runways of the Sioux Falls Regional Airport in Sioux Falls, S.D., meet proved to be challenging because the location did not leave enough room on either runway to land commercial airplanes so the airport had to be shutdown during the reconstruction process.

Conventional construction would have the airport closed to commercial air traffic for almost a month. That just wasn’t economically plausible. A different construction approach had to be developed. The answer: a series of four long weekends to rebuild the intersection, two weekends for actual work and an additional two backup weekends in case of inclement weather. The runways would be completely closed down starting at 2 p.m. Friday until 8 p.m. on Monday. One small runway would remain open for general aviation and air ambulance services. Penalties were in place if the main runways weren’t opened up in time. Penalties started at $20,000 and went up to $185,000 at four hours late, the maximum penalty faced per day.

At 2 p.m. on Friday, August 17, 2012, the airport closed down its runways and demolition work began. Removal of the runways was started right in the center of the two and worked towards the outer edges. Approximately 42 inches in depth of existing runway, subbase and dirt was removed using 30 pieces of equipment and over 80 trucks. New subbase preparations included a layer of geotextile fabric and then 25 inches of P209 crushed aggregate base course.

Six hours after the runways closed, T&R Contracting was ready to slipform the first paving pass with the GP-4000. Each pass was 37.5 feet wide and 17 inches thick across each of the 150-foot-wide runways. T&R Contracting also had a GOMACO GHP-2800 slipform paver on site, ready to go, as a precautionary measure in case a second paving train was needed.

“We set up a batch plant right outside the gate of the airport,” said Ryan Gulbrandson, project manager for T&R Contracting. “But being 17-inches-thick and 37.5-feet- wide, one cubic yard of concrete would only get us 6 inches of movement lengthwise so it wasn’t moving the fastest with the one plant. We had to fire up another plant in town to help us out.”

The concrete was an airport specified mix design with the ability to reach 3,000 psi within 24 hours. It also needed to set up quickly to allow T&R Contracting to come through and drill holes in the edge of the new runway for sidebars. Slump averaged between 0.5 to 1 inch. Twenty trucks were used to feed the GP-4000, each one carrying 10-cubic-yard loads. No placer/spreader was used. Instead, two trucks at a time dumped directly onto grade in front of the paver. Production averaged 400 cubic yards per hour.

During the first weekend of paving, T&R Contracting completed four pours and finished one of the 750-foot-long sections of runway by 4 p.m. Sunday afternoon. Monday morning was spent on hand pours for tie-ins and radii at the intersections. By 8 p.m. on Monday night, the runways were reopened and commercial plane traffic restarted.

“Our biggest worries that first weekend were definitely the weather and just making sure the concrete was going to make strength so we could open up the runways again in time,” Gulbrandson said. “The GP-4000 worked well and had no problems slipforming the high-strength concrete mix design.”

Four days later, on Friday, August 24, T&R was back at the Sioux Falls Airport to finish what it had started. Paving runs would be shorter this weekend because of the angled runways and the pieces left to pave. They’d have to work the GP-4000 over 16 headers and footers on that final weekend.

“The GP-4000 handled everything we threw at it and performed well over the course of the project and GEC’s Manager, Jeff Rassmusen, was available the entire time to answer questions or provide support,” Gulbrandson said. “The GP-4000 applied a nice finish, and all we had to do was run a 10-foot straightedge behind it.”

The two extra weekends as backup would not be needed. Rain was only a factor on the very first and the very last pour of the project. T&R Contracting finished the last slipforming run early on Sunday morning, August 26.