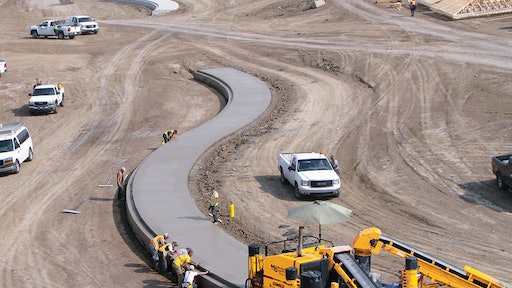 Marmot Concrete used their three-track Commander III, with an extra concrete conveyor, to slipform 2,625 feet of the unique profile. It was their first time slipforming this profile and they completed the work in just 10 days, working 12 hour shifts.

The Mahogany Central Beach site is a new lake community in the city of Calgary. It’s the site of Calgary’s largest freshwater lake and includes lake and beach-front access. Developers were having the issue, though, of their sand blowing off the beach and up onto the grassy areas.

Enter Marmot Concrete Services Ltd. of Calgary, Alberta, Canada. The contractor uses its three-track Commander III, with an extra concrete conveyor, to slipform 2,625 feet of a large retaining wall with sidewalk profile at the Mahogany Central Beach site in Calgary.

“They wanted to make the sand stay on the beach so they needed a wall,” said Gerry Babb, vice president of operations for Marmot Concrete. “The profile that was created has a 8.2-foot-wide sidewalk with a 31.5-inch face on it, and at the base of that is where the sand is. We handformed the first 656 feet, and it took us a long time because there’s a liner underneath that we couldn’t pound pins into. We actually had to use concrete blocks to brace all of the forms.

“It took us 4,500 man-hours to form it. We knew we had another site and 2,625 feet more of this profile to come. We had to figure out a better way to do it otherwise it would take us an entire year just to form it.”

They set up stringline in their company’s yard and started conducting tests with their Commander III. Supplying concrete for that large of a profile proved to be their biggest challenge. The contractor needed 2.6 cubic yards of concrete to slipform 3.3 feet of the profile. They tried dumping concrete on the ground in front of the paver, but that didn’t work. A single conveyor also couldn’t keep up with the concrete demand. They decided the only way they could get enough concrete into the mold would be to mount a second conveyor to the Commander III and dump two ready-mix trucks at one time.

With testing successfully concluded in Marmot’s yard, it was time to move the Commander III to the Mahogany Beach site and begin work on the project. Just 10 days later, the 2,625 feet of retaining wall with sidewalk was completed.

The concrete for the project was a 4,641 psi city of Calgary mix design with an average slump of 0.4 to 0.6 inches. Since the profile wasn’t slipformed over any steel reinforcing, fiber was added to the concrete. Twelve ready-mix trucks, two trucks every 20 minutes, carried 10.5-cubic-yard loads to keep the Commander III supplied.

“The Commander III slipforms such a nice product,” Babb said. “When we handformed that first section, we just couldn’t seem to get a consistent vibration using the hand-held vibrators. This time around, using the machine and having the vibrators set up, we didn’t have any cracks. The machine creates such a better product than by hand.”

It’s much faster, too. What Marmot Concrete had estimated could take up to a year to complete, the Commander III and its crew finished off in just 10 days, each day a 12-hour shift.

“The owners were excited because we were able to lower the price substantially just by eliminating all of those man-hours and we were also able to give them a better finished product,” Babb said. “These Commander IIIs are capable of doing just about anything, so be innovative and try things. You just have to think outside the box, try it, and it will work.”

Located in an arid desert climate, Southwest Concrete Paving Company turned to atomized mist cannons in the construction of a government airfield apron to meet the stringent standards of the Army Corp of Engineers.
Tyler Kempf
August 26, 2019
Follow Us