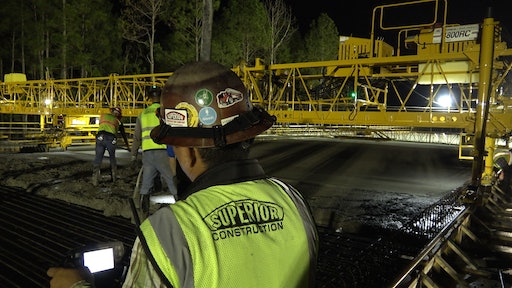 Built to ease congestion for motorists traveling through Orlando, the 25-mile Wekiva Parkway completes a beltway around the rapidly growing metropolitan area and tourist destination. A case study for inclusive planning of transportation through an environmentally sensitive area, parkway owners – the Florida Department of Transportation (FDOT) and Central Florida Expressway – worked with environmental advocates to devise a solution that would simultaneously protect wildlife and improve safety along the beltway.

The new limited-access toll road is primarily elevated with several designated wildlife crossing bridges designed to reduce the number of vehicle-wildlife accidents. FDOT has divided the project into eight segments, with the majority of the design-build construction projects starting in 2015 and ending by New Year’s Day 2023.

Superior Construction Southeast, Jacksonville, FL, was charged with constructing Section 6 of the project in Lake and Seminole Counties. The nearly 6.5-mile-long, $234 million segment includes construction and paving of three bridges over scenic Wekiva River – one each for eastbound and westbound travel plus a non-tolled service road bridge.

This section of State Road (S.R.) 429 follows the existing S.R. 46 corridor, which has a long history of costly vehicle collisions with wildlife. Nine out of 18 new bridges will add nearly 17,325 ft. of elevated structures for wildlife crossing. The first three such bridges to be built make up Wildlife Crossing #2, each measuring 3,859-ft. long. The structures will consist of two tolled express travel lanes – one eastbound and the other westbound – and a new service road bridge for local traffic that includes a 12-ft.-wide mixed-use pedestrian lane.

“The highest point of the bridge is approximately 15 ft. in the center, and there is a 2% slope with no crown or skew,” says Akshay Goel, field engineer for Superior Construction Company.

Superior must comply with the 2017 FDOT Standard 400 Specification for the project. Crews are using a Class II, 4,500-psi concrete mix for the bridge deck that achieves 75% spec strength within four to five days, and bridge deck thickness measures 8.5 in. The 7-in. slump mix is pumped onto the deck via two 42-m pumps, and crews pave an average of 550 cu. yds. of concrete at a time.

To accommodate the two lanes of vehicular traffic plus pedestrian lane, Superior has its bridge paver’s frame set to 60 ft. wide with the legs running along the overhang brackets. A vibratory screed is being used to manually pave the pedestrian lane.

When Ernie Stephens, corporate equipment manager for Superior, went through the process of adding bridge pavers for the Wekiva Parkway project, he planned to purchase two Terex Bid-Well 4800 pavers, since the company has used the brand for more than 20 years. “I never thought of using a remote-controlled paver,” he says. 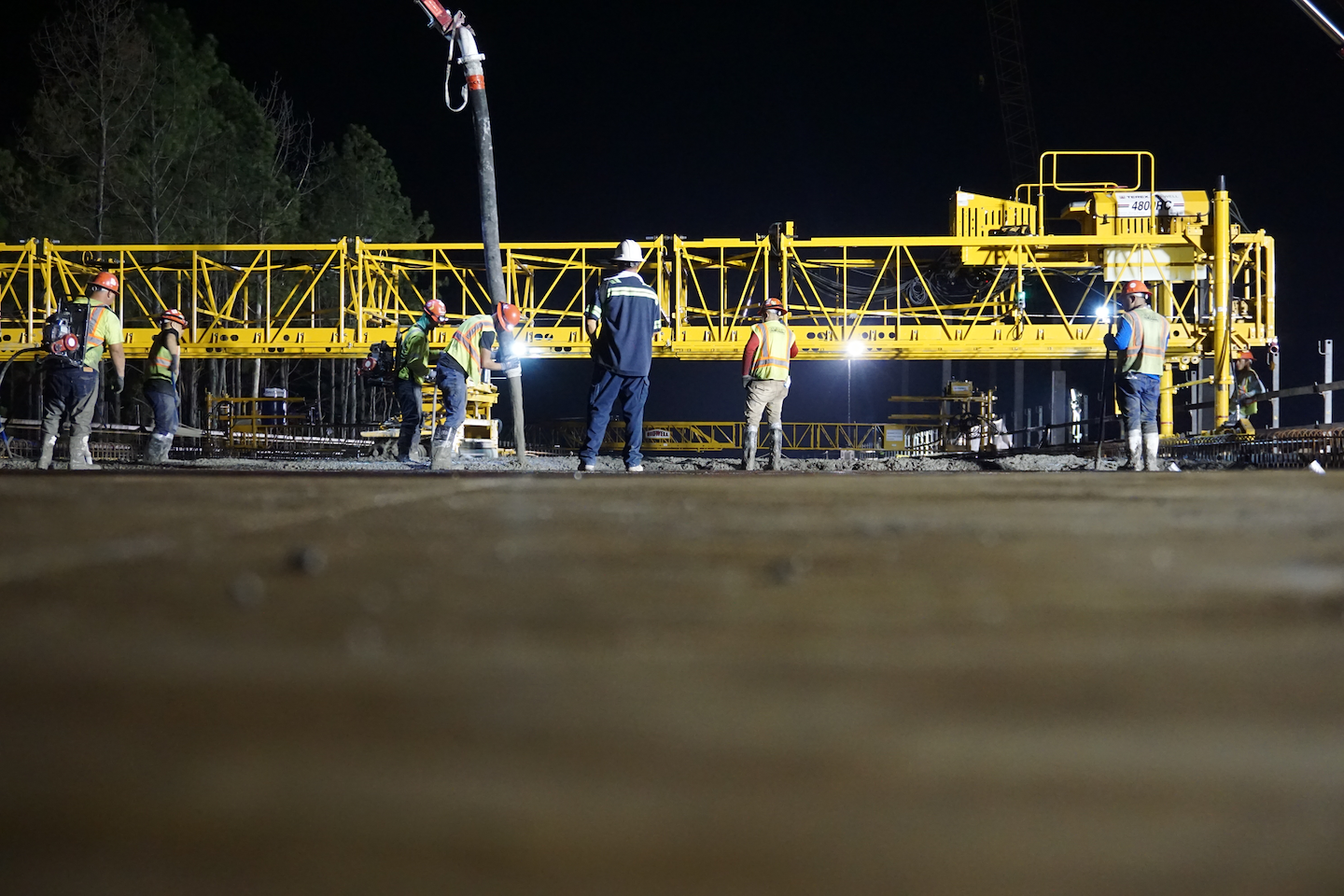 Superior Construction is paving the 18 bridges of the 25-mile Wekiva Parkway in Orlando with its first remote-controlled bridge pavers.The two discussed the remote concept and what machine functions are controlled by the radio remote-controlled unit. Stephens began to see some advantages from a cost, time and safety standpoint. Since the operator controls paver functions from ground level vs. the operator platform, “It improves communication between workers and allows the operator to be a better asset,” says Stephens.

Bachey adds, “The remote unit puts all workers on the ground, whereas a paver without remote control keeps the paving quarterback (the operator) tied to the machine.”

For Stephens, the significant advantage is associated with the formwork. Bridge paver designs position the operator at one end of the machine, which can hang over the side of the bridge. “We have to build out the falsework to account for the operator working from the machine," he explains. "Having the operator on the deck eliminates some of the falsework, which saves us material, time and expense.” 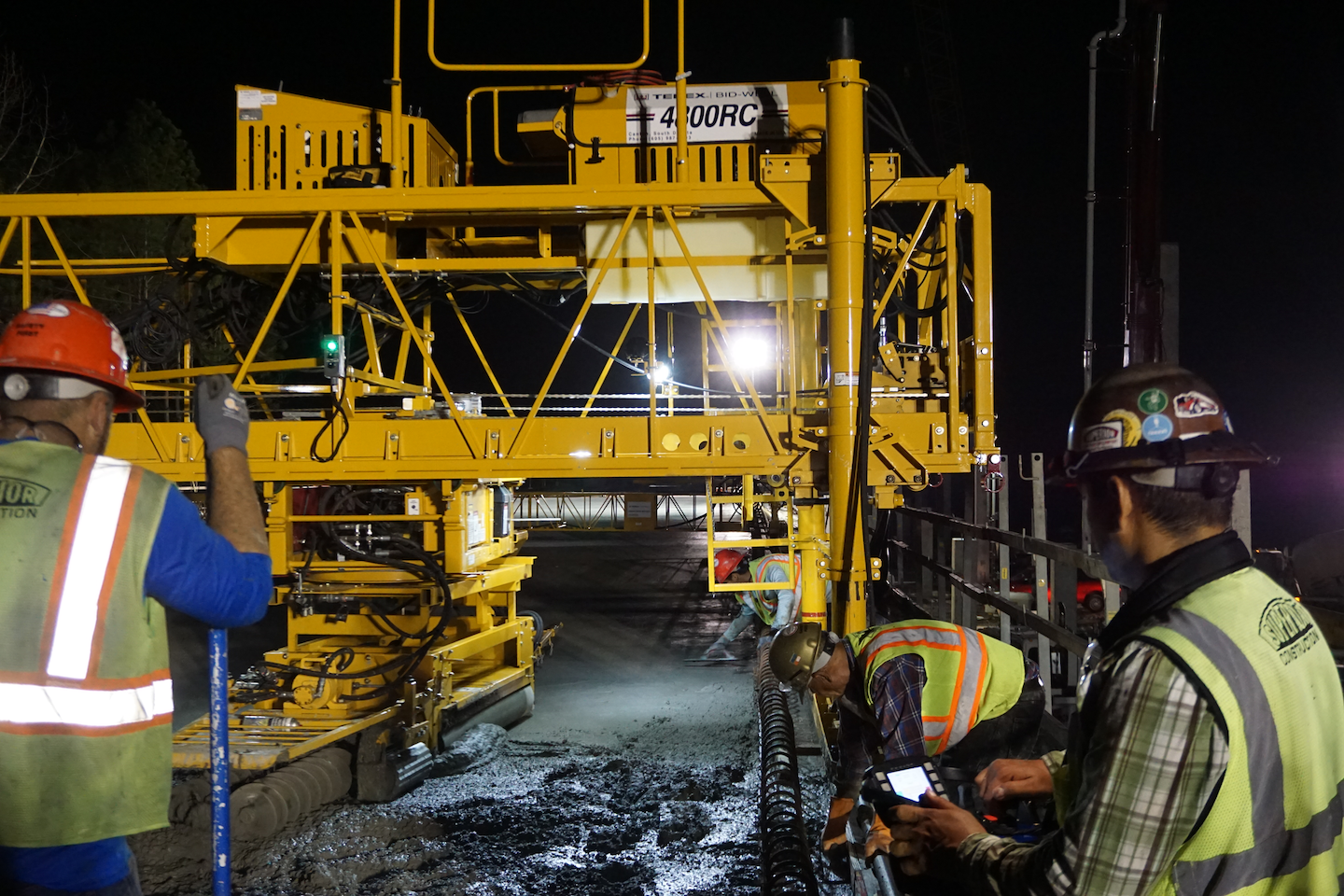 The operator controls all paver functions from deck level rather than the platform on the machine.For a safety-conscious company like Superior, which recently received the American Road & Transportation Builders Association’s “Contractor Safety Award”, having the remote-control option aligns well with the company’s safety philosophy. The operator is mobile rather than tied to the machine, so the paver can be controlled from the machine’s front, side or rear, wherever the operator is needed.

“It allows the operator to better see and address a potentially unsafe situation,” says Bachey.

By the end of the conversation, Stephens ordered two remote-controlled 4800RC pavers for the project. “It was an added feature with many upsides at a reasonable price-point,” he says.

Superior began work on the service road bridge of Wildlife Crossing #2 in February 2018, with a completion scheduled for March 2019. In order to stick to the schedule, Superior’s crews needed to have three spans of bridge deck prepped and the paver set up for a pour every two weeks. 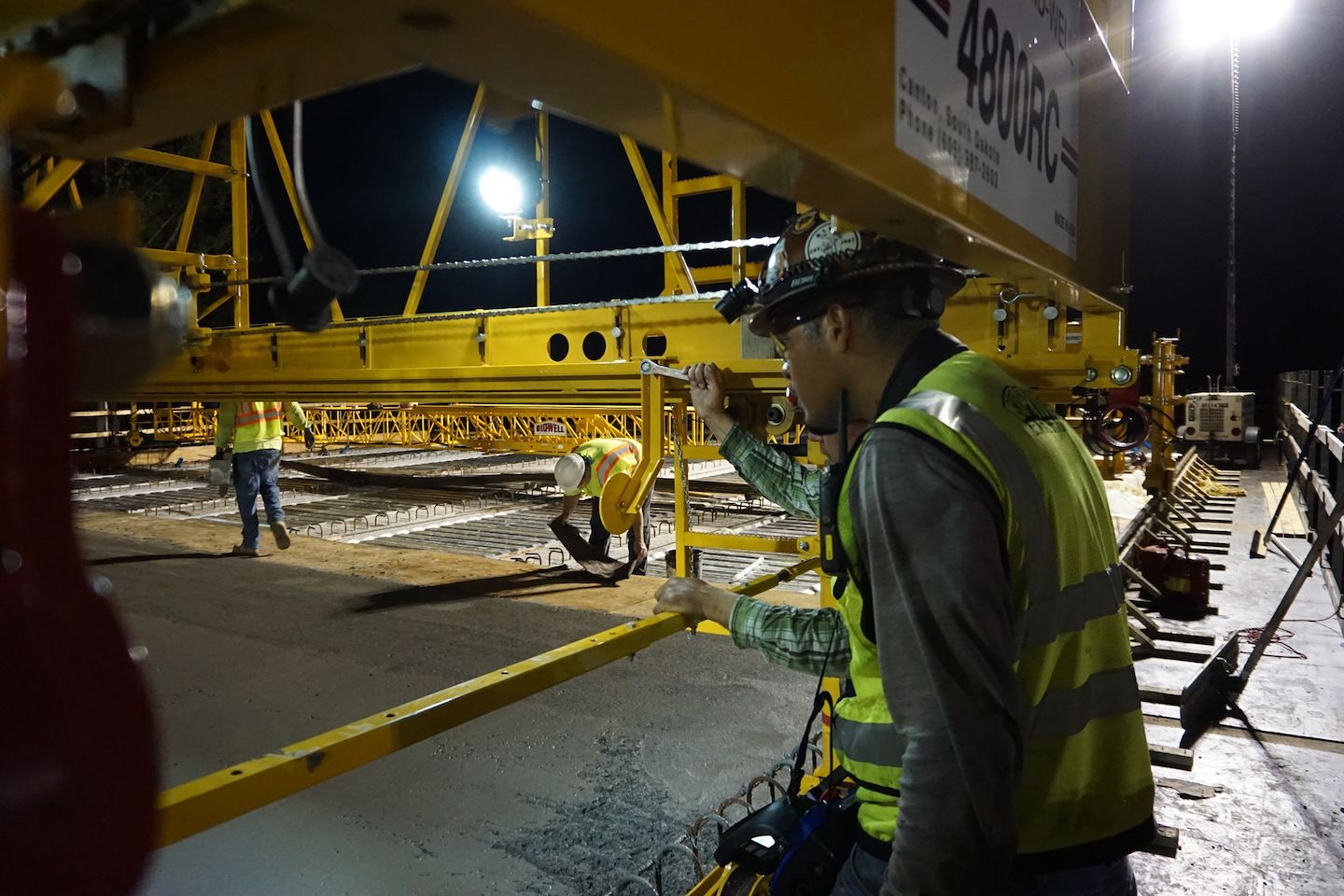 With the remote control, the operator makes all necessary machine adjustments during a pour from the deck, without the need to call down to a laborer from the platform.Prior to paving, the machine had to be stringlined and put through a dry run to ensure that the paving carriage would deliver the specified minimum 8.5-in. deck thickness at the established slope. With a traditional paver, this required the operator plus one or two workers to adjust the leg, frame and crown.

“The operator has to climb up and down from the platform to help with making all the necessary elevation and machine line-up settings,” says Bachey.

The remote-control unit enabled the operator to make all the necessary machine adjustments from the deck. “It now only takes one person to set up the paver with the remote control,” Goel says. “This gives us more flexibility in who can set up the paver, and we can more efficiently use our workers for deck preparation and other work.”

“We have realized labor savings of approximately 20 hours per pour," Jones adds. "By the time we are finished with the bridges at Wildlife Crossing #2, we estimate a 780-man-hour savings.”

During a pour, Superior experienced increases in paving efficiencies and safety by having the operator on the deck. On a traditional paver, the operator is stationed at one end of the paver and must stop the machine or call down to a laborer to make required machine adjustments during the pour. Superior established a 60- to 70-cu.-yd./hour production target, based on previous experience with its traditional pavers. 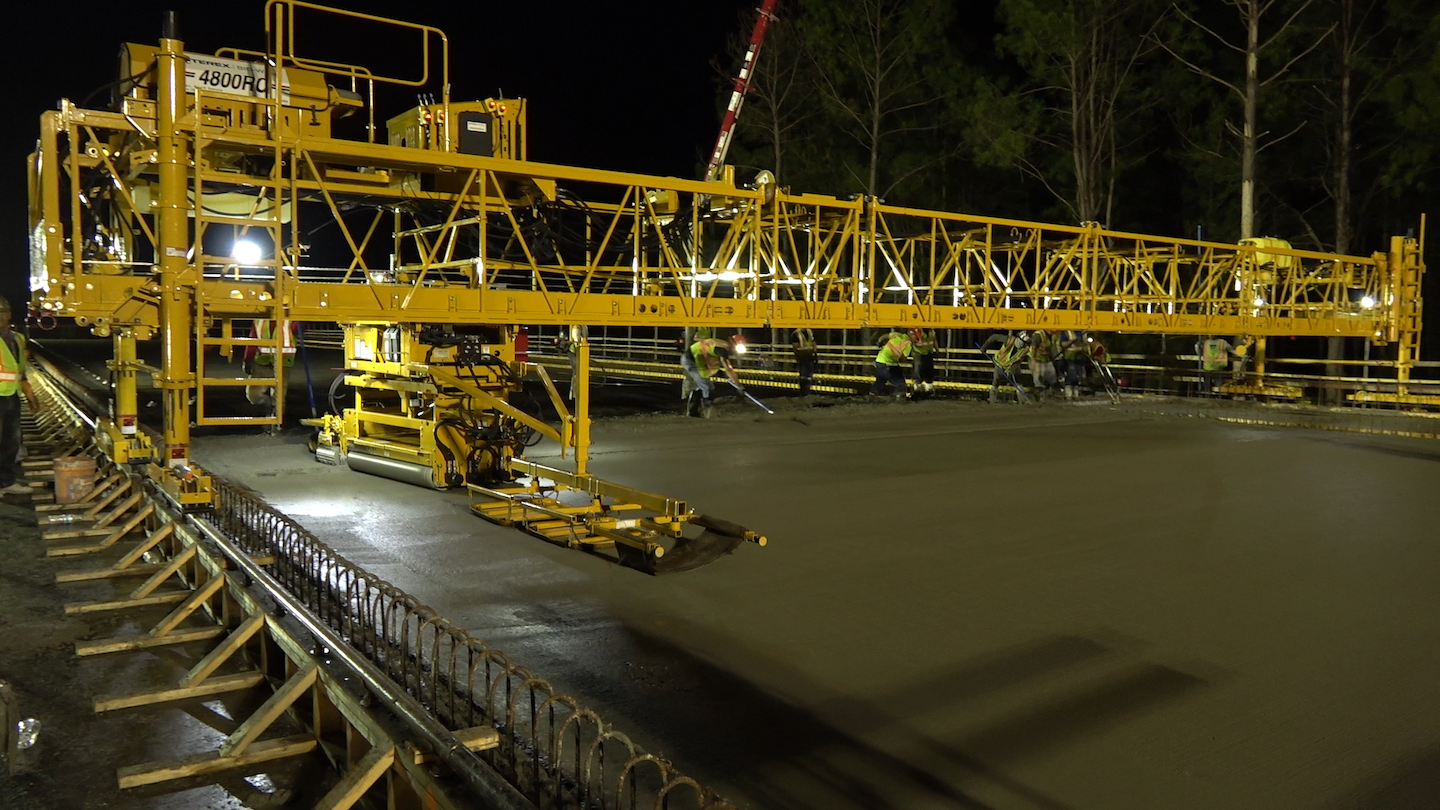 Superior Construction set a 60- to 70-cu.-yd./hour production target, but the remote-controlled paver has helped to increase production to 100 cu. yds./hour.The wireless remote-control unit, however, allows an operator to work closely with the laborers and fine-tune the machine’s leg elevation, crown, paving speed and engine throttle from the deck. “It’s much more efficient to run and adjust the paver from the deck,” comments Jones. “Being more efficient during the pour helped increase production to 100 cu. yds./hour. Basically, we were matching the plant’s capacity to produce the concrete.”

While Superior didn’t originally plan to purchase a remote-controlled paver, the formwork savings, safety advancements, production increases and labor improvements have made this investment pay off.

After running the remote-controlled paver on several pours, Goel echoed Stephens’ comments on elevating safety during the pour. “When operating the paver from the front of the machine vs. at one end, the operator can more easily see if a person is in a danger zone when advancing the machine. Also, making the paver adjustments with the remote keeps workers away from the machine,” he says.

“The added features at a reasonable price-point for the remote-controlled paver made this decision a no-brainer,” says Stephens.