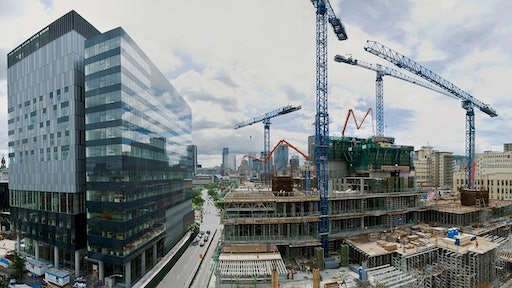 Upon completion in 2016, the 21-story main building of the massive, Montreal University Health Centre will provide more than 1,145,000 square feet of floor space and deliver 772 single-bed
rooms.

Designed to achieve LEED Silver certification, the Montreal University Health Centre roject is one of North America’s largest concrete jobs with a footprint of 100,000 square feet. Multiple pieces of Putzmeister equipment, including two trailer pumps, four placing booms and four towers, were used to place the nearly 110,000 cubic yards of concrete required for the project.

In order the complete the colossal project, two leading contracting firms, Laing O’Rourke and Obrascon Huarte Lain, joined together to form Construction Santé Montréal (CSM). They hired Coffrage Alliance as the formwork contractor for the job, who turned to Laval-based TPG Concrete Pumping (TPG) to determine a plan for placing the immense amount of concrete required for the hospital.

With a footprint totaling approximately 100,000 square feet, it was essential to figure out a concrete placing system that could reach all parts of the project with minimal set-up and tear-down. TPG suggested a set-up consisting of two Putzmeister trailer-mounted pumps to pump through RS 750 pin towers up to four Putzmeister MX 36/40Z placing booms. With a horizontal reach of more than 115 feet each, the placing booms were able to cover nearly the entire project footprint.

“Due to the sheer size of the job, we needed to provide the most efficient concrete pumping solution,” said David Mirabella of TPG. “The combination of the four placing booms worked really well for this application.”

To pump to the maximum height of more than 300 feet, the team selected two Putzmeister BSA 2107 trailer-mounted concrete pumps to connect to the placing booms, which offer a maximum pressure of 3,190 psi.

“The Putzmeister equipment supplied by TPG proved to be critical and effective pieces of equipment in the concreting work at the hospital,” said Carl DiChiara, senior project manager for Coffrage Alliance. “The project featured unusual and difficult-to-pump mixes for which the equipment proved very reliable.”

Also helping to progress the project vertically was the Multi-Z design of the Putzmeister placing booms. With four tower cranes present at different levels on the project, the flexible boom design allowed the crew to work at a level that wouldn’t interfere with the functioning of the tower cranes.

“We really appreciated the Multi-Z on the MX placing booms, which allowed us to fully deploy the boom atop our self-climbing shaft system,” said Benoit Hétu, formwork superintendent for Coffrage Alliance. “The task would have been difficult with a different boom style, due to the four tower cranes in constant operation on site.”

The harsh concrete mix used, along with some of the pours taking place over a long period of time — up to 16 hours — also posed challenges on the jobsite. The project called for the use of an anti-corrosive, 80 mpa cement, which is 10 times stronger than the typical hospital seismic resistant strength required. While the harsh mix is harder on the pumps, the Putzmeister equipment was up to the challenge.

“Regardless of the harsh mix design and the long pumping durations, the Putzmeister equipment was always ready to perform due to its free flow hydraulic system, which kept the systems running cool,” explained Mirabella.

Concrete work at Montreal University Health Centre wrapped up at the end of 2014 with the hospital opening to patients in 2016.

The Montreal University Health Centre is a merger of three existing university hospitals, Hôtel-Dieu de Montréal, Hôpital Notre-Dame and Hôpital Saint-Luc, into one of two major healthcare networks in Montreal. The new building will feature cutting-edge technology and will comprise nearly all of the network’s clinical services; its in-patient services, its diagnostic treatment services, plus all hospital beds and most of its outpatient clinics. Virtually everyone will be able to relocate from the three existing hospitals by 2016.