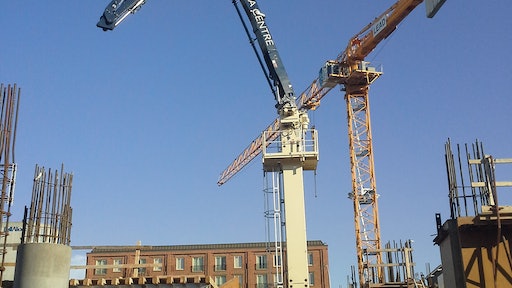 A Putzmeister MX 34/38Z placing boom with a horizontal reach of 110 feet is being used to build vertically on the project.

The new mixed-use Nova Centre in Nova Scotia, Canada, will reach its maximum height of 200 feet with the help of several pieces of Putzmeister equipment, including two innovative Putzmeister RS 850 Column Placing Systems. To place concrete for the foundation work, a Putzmeister BSF 43Z.16 and a Putzmeister BSF 20Z.09 were used. Traditionally, in Halifax, truck-mounted concrete boom pumps are used for the entirety of projects like this. However, this particular job required a different solution due to its height and poor access at the site. Since the building is being constructed directly in the downtown Halifax, the space required to set up a truck-mounted concrete pump was limited. Additionally, lane closures were not a possibility.

Once the building was up to street level, concrete pumping contractor Pumpaction, Inc. proposed a different solution to place the concrete foundation.

The Nova Center will include one million square feet of mixed-use space built on two complete city blocks. The building is the largest integrated development project undertaken in Nova Scotia's history and will include a financial center, luxury hotel, residences, retail and entertainment amenities and a convention center, parking, and public space.

The anticipated LEED Gold-certified development’s design was influenced by a public engagement process in which the proposed plans were shared with the community and the public was asked to share feedback and suggestions for improvement, ultimately resulting in the final plan.

“We decided to utilize the Putzmeister ZX125 pipe system because the pressure could reach up to 1,885 psi on the piston side,” explained Keith Armishaw, sales representative for Pumpaction. “We knew it could stand up to that pressure without any complications since the system uses a male/female connection that is 100% leak proof.”

The contractor selected Putzmeister’s new RS 850 column placing system due to its innovative, hydraulic self-climbing system. As the floors are built, the complete column assembly is lifted through the floors below to raise the placing boom above the formwork. The entire structure, including delivery pipe line and ladder system, can be lifted in less than an hour through a small floor opening of three feet by three feet without the use of a tower crane.

“One of the biggest advantages of using a placing boom system — a self-climbing one in particular — is that it reduces crane time to a minimum during the concrete placement sequence, freeing up the crane for formwork and rebar,” explained Armishaw. “Additionally, it frees up space on the ground where truck-mounted boom pumps would normally be parked.”

“The self-climbing towers have been working superbly,” added Brad Gregus, senior superintendent for EllisDon. “It only takes an hour to move the boom from one tower to the other. It’s the most efficient, timesaving piece of equipment on site.”

The team also utilized the RS 850 floor support plates for this project. They set up the column system between two floors with a minimum height of 10 feet between the floors. The floor plates kept the bottom section of the RS 850 columns in place, and then the column was wedged at the upper floor.

While the placing system is essential for rising up to the maximum height of the project, the concrete pump is equally important in terms of delivery. For this application, the project used a Putzmeister BSA 2109 H-D trailer-mounted concrete pump with a 268-hp diesel engine. It offers a maximum output of 103 cubic yards/hour and maximum concrete pressure of 1,320 psi.

“The pump has been working extremely well and has never given us a minute of trouble,” says Gregus. “It’s powerful, and yet quieter than any pump I’ve used before. It’s beautiful piece of equipment.”

Since two placing system columns are being used on the project, a Putzmeister DVH 5/2 hydraulic diversion valve that is hydraulically powered by the trailer pump is being used to switch between the two, depending upon where concrete is being delivered at a given time.

When the highly anticipated Nova Centre project wraps up in late 2015, Halifax residents will be gifted with an innovative mixed-use development that revitalizes the heart of Atlantic Canada’s hub city. The developers hope it will be a reflection of and catalyst for economic growth, job creation, tax revenue, tourism, entertainment and people attraction.