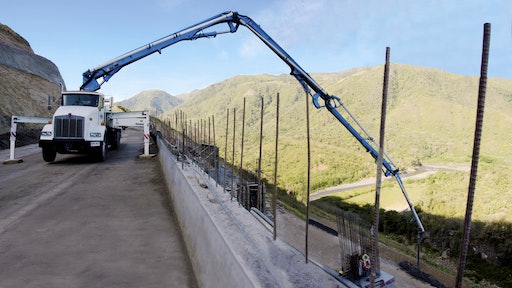 La Ruta del Sol, also referred to as National Route 45, connects the capital, Bogota, with other large urban areas in the middle of the country and Caribbean coast.

Sector 1 of La Ruta del Sol is comprised of a 78-mile stretch in the Department of Cundinamarca beginning at The Cune in Villeta and ending at The Koran in Puerto Salgar. This portion of the project began in late 2011 and was initially designed to incorporate three tunnels and 10 bridges to significantly reduce travel between Bogota, the capital city of Colombia, and the Magdalena River. However, environmental factors have caused a change in design plans. Sector 1 will now have 72 bridges and two tunnels.

Consorcio Víal Helios, which is a joint venture between Constructora Conconcreto S.A., CSS Constructores, Iecsa S.A and Carlos Solarte, is overseeing the project and also owns the Putzmeister equipment.

Over the course of development of Sector 1 of La Ruta del Sol, the project will create 3,200 direct jobs and 10,000 indirect jobs, increase the standard of living and will ultimately be a model for future road and other infrastructure in Colombia.

Sector 1 is comprised of three stretches, called Tramos. Tramos 1, specifically, endured some setbacks as the project affected the water supply of a local town. After extensive discussions with technical experts at the Colombian Society of Engineers, it was decided that a new path from Guaduas and Villeta in Tramos 1 would be the best solution.

Known as Concession Sabana de Occidente, the new 14.3-mile route was implemented in April 2015 and will ultimately be faster to build with fewer risks. Tramos 1 is expected to be completed in 2019. Tramos 2 and 3, which total 34.8 miles, have already been completed.

One of the largest challenges for Sector 1 of the La Ruta del Sol project is the extreme weather and difficult environment that abounds in Colombia. Although the shortest of the three Sectors, Sector 1 runs through some of the most technically challenging terrain — steep inclines, switchbacks, mountains and more.

Additionally, the climate has severely impacted the design. Due to its geographic location, Colombia experiences extreme weather patterns that can result in increased precipitation over extended periods of time. Between 2010 and 2011 specifically, extensive rainfall from La Niña affected the region and caused widespread slop failures, landslides and flooding along the project’s alignment.

“The impact of La Niña events on the design and construction became a major topic of discussion for the safety and progress of Sector 1,” said Ritorni. “These factors confirmed that we needed Putzmeister equipment, which is reliable and operational under these challenging conditions. We also have peace of mind knowing that all Putzmeister equipment features a manual override in case of an emergency situation, which is a great benefit on this remote project.”

Ritorni added that “given the large-scale project, we had some challenges with the weather and landscape to work around. However, the Putzmeister equipment has the advanced features we needed to overcome the unusual concrete pumping requirements.”

Due to the weather setbacks, and unique and rough terrain, the Putzmeister Thom-Katt TK 40 was utilized to reinforce the tunnels through the mountains. “The TK 40 allows us to push the limit as it offers reliable pumping in extreme circumstances,” said Ritorni. The TK 40 has been working on shotcrete foundations and concrete pumping.

The new placement of Sector 1 Tramo 1 allows for the potential to tunnel at greater depths along the alignment in order to provide protection against future landslides and rock falls, dramatically decrease the time required for road closures and repairs, decrease the alignment length, decrease travel times, and offer long-term sustainability.

Because of the unique pump positioning required, four Putzmeister SPM 500 WETKRETs were chosen for shotcrete reinforcement of the tunnels and slopes. The SPM 500 is designed to traverse rugged terrain and its spray arm offers maneuverability, accuracy and controllability, all with a long reach, which allowed workers to access the highest points of the job.

Ritorni added, “We used the SPM 500 because it is an all-in-one system that didn’t require us to use multiple pieces of equipment. It provides a pump, arm and nozzle all in a compact footprint.”

Due to Colombia’s location near the equator, daytime temperatures reach up to 100° Fahrenheit. In order for the concrete to be kept between the specified temperature range and maintain its strength, ice was added to the mix.

For Sector 1, around 429,000 cubic yards of concrete and 627,000 short tons of pavement will be used, with crews working 10 to 12 hours per day. The Putzmeister equipment has been standing up to the demanding schedules day after day.

Argos, the concrete market leader in Colombia and the second largest producer in the United States, supplied the concrete for the job.

Upon completion in 2020, La Ruta del Sol will reduce travel times, costs and accidents along Colombia’s main road and provide better access and improved services for more than 10.5 million vehicles.