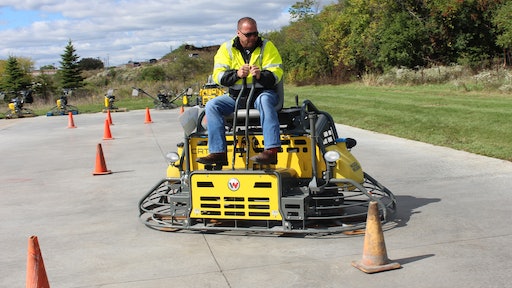 Wacker Neuson’s annual Trowel Challenge competition will be held for the eighth year at the company’s World of Concrete (WOC) booth, February 2-5, 2016, Las Vegas, Nev. The competition has become a main attraction of the concrete show and draws hundreds of competitors and thousands of spectators every year. For 2016, the course has been reconfigured to show-off operators’ skills for precision finishing as well as speed. “The intent of the trowel challenge has always been to test the operator’s troweling skills,” says Matt Basky, concrete product solution specialists for Wacker Neuson. “This year we have reworked the course to slow the speeds down, but emphasize precision finishing skills using an eight foot mechanical steer ride on trowel,” said Basky.

Each year, Wacker Neuson creates an obstacle course on a 1,750 square foot concrete slab at their WOC booth (#O31708). Concrete finishers are invited to test their skills as they maneuver a ride-on trowel through the timed course. The top 10 finishers of the qualifying rounds will meet for the final championship on Thursday, February 4, 2016. Competitors will once again vie to win the grand prize a custom, 48-inch CRT 48-35VX ride-on trowel powered by a special Vanguard BIG BLOCK V-twin engine.

Wacker Neuson has all it takes to get concrete right!

While the Trowel Challenge draws crowds and creates excitement, attendees are also invited to learn more about the industry’s largest, most diverse line of concrete trowels. From the 24-inch finishing model up to the 10-foot hydraulic rider, there is a Wacker Neuson trowel to fit any job for any concrete contractor.

For over 25-years, Wacker Neuson has been a leading manufacturer of walk-behind models designed for professional results, comfort and safety. As safety continues to be paramount concern for jobsites, Wacker Neuson’s walk-behind models offer a patented design to provide extra protection from an out of control spinning trowel handle. When the operator lets go handle, a gyroscopic safety sensor detects the motion of the handle and stops the engine before the handle reaches a 45-degree rotation. This engages the gearbox brake which will stop the handle rotation within a 270-degree rotation. This proven system is the industry’s best way to protect the operator form being struck by a runaway handle.   Watch the video here http://www.wackerneuson.us/en/your-industry/concrete-construction.html

Follow the fans to Booth #O30708 to participate or to cheer on your favorite finisher during Wacker Neuson’s Trowel Challenge 2016. And while you are there, learn about Wacker Neuson’s complete line of trowels and all the equipment you need for your next concrete job.