The robot offers four times the power of a hand lance in a compact footprint that contractors can easily move around the jobsite. It is ideal for work on floors, walls and ceilings. 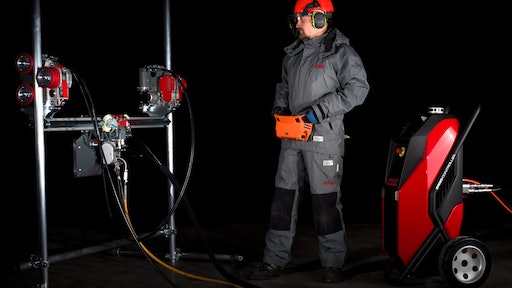 Aquajet Systems AB, recently acquired by Brokk AB, will launch the Ergo System in the United States at World of Concrete 2019. The hydrodemolition robot offers four times the power of a hand lance in a compact footprint that contractors can easily move around the jobsite. It is ideal for work on floors, walls and ceilings.

The Ergo System incorporates: the controller unit, which powers and controls the hydraulics, the Ergo Power Head, which manipulates the high pressure lance, and either the spine or the climber, unique systems used to support and maneuver the power head, based on project needs.