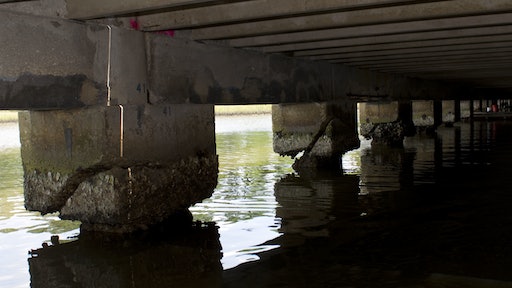 Deterioration over time had caused the bridge beams to torque, and they needed structural reinforcement. MAPEI worked alongside the contractor, Premier Corrosion Protection Services (PCPS), and design engineer (B2 Engineering, LLC) to repair the bridge.

JEA, created by the City of Jacksonville to serve the city and surrounding communities, provides electric, water and sewer services while protecting the area’s natural resources.

According to company information, “JEA owns and operates an electric system with five generating plants, and all transmission and distribution facilities, including over 745 miles of transmission lines and more than 6,500 miles of distribution lines.

As part of a design/build project to maintain NGS, MAPEI was asked to come up with a repair solution using FRP composite materials (specifically carbon fiber) to strengthen the bridge beams and pile caps on the flume road bridge that spans Nichols Creek and links the generating station to raw materials barges from the Jacksonville Port Authority.

Deterioration over time had caused the bridge beams to torque, and they needed structural reinforcement. MAPEI worked alongside the contractor, Premier Corrosion Protection Services (PCPS), and the design engineer, B2 Engineering, LLC, to meet the requirements of the specifications.

The physical aspects of undertaking the project were challenging due to the extent of the damage in the concrete structure, difficult access to the repair area, an aggressive environment, low clearance between the repair area and the water, and environmental regulations.

MAPEI products at work on the jobsite
Much of the work on the bridge was at or just above water level, so the PCPS crews worked aboard a system of 30 rafts that were moved between the beams and pile caps. The project consisted of repairs and structural strengthening of 63 beams, each 2' x 2' x 15' long. Repairs were also made to 64 pile caps that were each 5' x 5' x 2' thick, 15 of which had to be reconstructed due to the extent of deterioration.

The first step in the repair process was the removal of deteriorated concrete and the cleaning of corroded rebar that was exposed. The rebar was then coated with MAPEI’s Planibond 3C, which acts as a corrosion inhibitor and as a bonding agent for repair materials.

For those caps and beams that had extensive deterioration (beyond four inches deep), the PCPS crews used MAPEI’s Planitop 15 mortar, which is well-suited for form-and-pour and form-and-pump applications where high early strength and flowability are required. Planitop 15 was extended with 3/8" pea gravel for the full-depth pours.

Once repairs to the beams and pile caps were complete, the second phase of operations involved structural strengthening with MAPEI’s FRP system. Carboplate E 170 was applied in four locations along the length of each beam — one strip along the inside face, one strip along the outside face and two strips along the bottom.
Next, MapeWrap C Uni-Ax 300 carbon fiber fabric was applied in 15 3/4" wide strips in stirrup fashion at 24" centers along the full length of the beam. Then, the entire beam was encapsulated with MapeWrap C Uni-Ax 300.

MapeWrap Primer 1 is used as a seal coat for consolidating and priming concrete substrates. After mixing, MapeWrap Primer 1 becomes a low-viscosity resin that is able to penetrate a cementitious pore structure and provide a high bond for the other components of the MapeWrap composite system on horizontal, vertical and overhead surfaces.

MapeWrap 12 is a two-component, 100 percent-solids, moisture-tolerant, structural epoxy used as an adhesive for the Carboplate composite system.
MapeWrap 31 is a 100 percent-solids, moisture-tolerant, medium-viscosity epoxy resin for impregnating MapeWrap composite system fabrics by a dry layup method. MapeWrap 31 was specially developed to saturate and encapsulate carbon and glass fiber fabrics and to cure to a high-performance laminate. Once cured, MapeWrap 31 provides high mechanical strength properties.

As a final touch to the system, Mapeflex P1 SL was used as a joint sealant for expansion joints on the bridge deck, and Planitop 15 was used to restore the edges of the joints.

MAPEI was proud to be a part of this project that delivered a structurally sound concrete bridge in order to support the work vehicles traveling across it to service the raw materials cargo delivery systems.