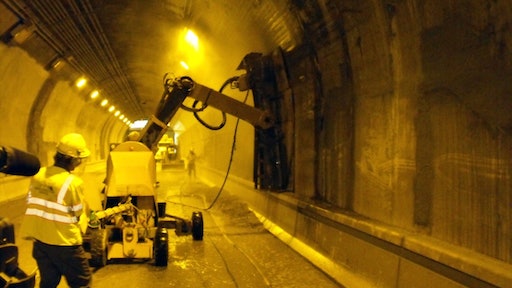 The Pennsylvania Department of Transportation selected hydrodemolition surface preparation for the $18.8 million rehabilitation of Pittsburgh’s Liberty Tunnels because time was of the essence to complete the project on deadline without penalties. Hydrodemolition, the fastest and thus most cost effective method, was utilized to prepare the tunnel walls for a new, shotcrete surface.

Because of hydrodemolition’s quick concrete removal and easy cleanup, contractors are able to work faster than with conventional concrete removal methods. This allows them to work within the project’s limited hours of access to the jobsite and avoid heavy penalties for not opening the tunnel to traffic by the daily deadline. In addition, no damage or cracking of the tunnel walls has occurred using hydrodemolition, as often occurs when pneumatic jackhammer techniques are used.

The project will increase the service life of the Liberty Tunnels as well as reduce maintenance cost, increase visibility for drivers and repair deterioration from 90 years of wear and tear. The entire area to be removed will be 212,960 square feet of concrete, the equivalent of nearly four football fields. Since the hydrodemolition began in April 2013, the traveling public has experienced few delays. Hydrodemolition makes it possible to remove concrete between the hours of 10 p.m. and 6 a.m.

Because it is more efficient than jackhammers, hydrodemolition is only a fraction of the cost, according to Ed Liberati, chief engineer at Hydro-Technologies, Inc., subcontractor for the Liberty Tunnel project. Contractors working on the project include general contractor Swank Associates, based in Appolo, Penn., HTNE Hydrodemolition Service LLC, based in New Kinsington, Penn., and Hydro-Technologies, Inc. based in Jeffersonville, Ind.

The Liberty Tunnels are a pair of tunnels, 5,889 feet long that allow motorists to travel between the South Hills of Pittsburgh and the city, through Mount Washington. There is an inbound tunnel and an outbound tunnel, each with two lanes of traffic. The tunnels were constructed from 1922 to 1924 and were vital in the expansion of the South Hills suburbs by providing a direct route to the city, eliminating the time-consuming task of navigating around or over Mount Washington. Repairs are difficult with a traffic volume of 48,000 vehicles daily and extremely heavy traffic during rush hours and special events in Pittsburgh.

The heavy traffic, limited hours and special events have made the rehabilitation of the tunnels extremely difficult. “It’s a heck of an undertaking,” said Liberati. Every night the hydrodemolition equipment and crews enter the tunnel after the closure and get as much done as possible before shutting down the equipment, cleaning up debris then exiting the tunnel before the 6 a.m. opening. If the tunnel is not opened by 6 a.m., the contractor would be assessed liquidated damages of $7,800 per hour until the tunnel is opened to traffic. That leaves only eight work hours per night. During sporting events and concerts, the hours are slashed even further. After the Pittsburgh Pirates games, for example, construction could not begin until midnight. Hydrodemolition makes it possible to work within these hours and avoid penalties because of the relative ease of cleanup and the speed of the removal.

For the Liberty Tunnel project, hydrodemolition was superior to other methods of removing the deteriorated concrete from the tunnel walls such as jackhammers. Hydrodemolition only necessitates three to four people to operate the robots whereas jackhammers would have needed around 30 workers. “Another option, building a new tunnel from scratch, would have cost the state hundreds of millions of dollars,” said Liberati.

“Given the allowable working hours there would be no chance to complete the job in one construction season using different methods,” said Denis Mazzoni, project manager at Swank Associates, the general contractor for the Liberty Tunnel project.

Hydrodemolition utilizes a high-pressure water jet operated by a hydrodemolition robot. On the Liberty Tunnel project, two Conjet 363 vertical robotic units performed partial depth, selective removal hydrodemolition on the tunnels’ vertical wall horseshoe profiles that have 14.5-foot posted vertical clearance. The Conjet 363 vertical hydrodemolition robots’ water jets are controlled by an experienced technician and are operated over the entire surface of the tunnel walls. The flow rate, pressure, dwell time and cutting head are computer-controlled to consistently provide the ideal settings required to selectively remove deteriorated concrete while leaving the sound concrete intact. After the hydrodemolition removal is performed, the entire surface is water-blasted resulting in a high quality surface that is ready for the shotcrete application.

Hydrodemolition in the U.S. was initially confined to bridges, but now it is used on bridge decks, piers, factories, and military bases or wherever deteriorated, reinforced concrete has to be removed by the owner to rehabilitate and preserve a structure. The Pennsylvania Department of Transportation has recently specified hydrodemolition for a wall rehabilitation project on State Route 51.