Two University of Texas at Arlington researchers are working with the Texas Department of Transportation (TxDOT) on new technology that could strengthen riverbanks and eliminate harmful erosion around bridge supports.

University of Texas at Arlington 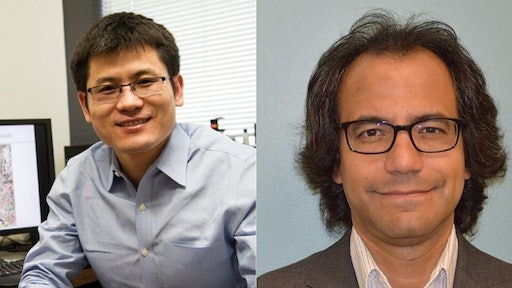 Two University of Texas at Arlington researchers are working with the Texas Department of Transportation (TxDOT) on new technology that could strengthen riverbanks and eliminate harmful erosion around bridge supports.

Associate Professor Xinbao Yu and Professor Laureano Hoyos, both of UTA’s Civil Engineering Department, are working on a three-year, $210,333 TxDOT contract to measure performance of newly designed articulated concrete block and percussion-driven anchor systems. They will examine these systems both during and after construction along the channel banks of the Clear Fork of the Trinity River under Interstate 20 in Fort Worth.

Riverbanks are susceptible to erosion caused by flooding, which can cause problems when bridge supports are built into them. A reliable and cost-effective slope protection system is critical to enhance the safety of the traveling public.

The slope protection system Yu and Hoyos are studying includes anchors attached to articulated concrete blocks that are strung together much like tank treads. Several sets of blocks are slotted next to each other directly on the surface.

The bridge they are studying is downstream of an Army Corps of Engineers’ reservoir, making the project even more intricate. TxDOT planned temporary dewatering measures to be able to construct the erosion control system on the channel banks. Dewatering is drying an area so it is free of water and contractors can work there.

“The system we’ll be testing is used in a similar fashion in other states,” Yu said. “Because of Texas’ unique soil and climate, TxDOT wants to take advantage of this project to measure performance to expand implementation of the system, as it has several advantages not only to enhance stability of channel slopes, but to reduce environmental impact.

“Other methods are more costly and could interfere with the river flow. These new systems will stabilize the soil from below the surface and act almost like armor above the surface.”

Yu and Hoyos will spend several months testing materials in their lab before working alongside construction crews to perform tests on site and install sensors to collect data. They hope to monitor the sensors through a minimum of two major flood events and use the data to gain a better understanding of how the slope protection measures perform. The data will also help them develop design and installation guidelines for future projects.

“Their research findings will enable TxDOT to make decisions going forward that enhance stability, durability and safety of bridges and roadways while ensuring that taxpayer dollars are used in the most economical way possible,” said Ali Abolmaali, chair of the Civil Engineering Department. “The data they collect in the process will be valuable in determining the feasibility of this technique in other applications for infrastructure safety.”