2014 Projects of the Year Announced by CFA 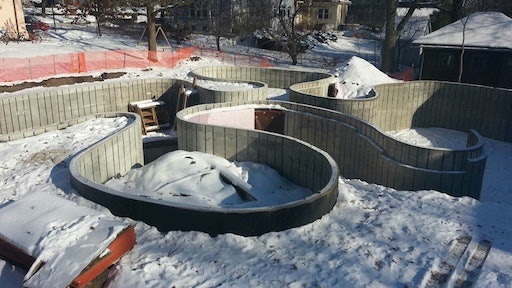 The CFA's Overall Grand Project winner was completed by Hottmann Construction Company, Inc. of Dane, Wis. It is also the winning entry in the single-family residence category for 2,000 to 5,000 square foot projects.

Following evaluation by the industry and general public during the World of Concrete and online at www.cfawalls.org, the Concrete Foundations Association (CFA) has announced the 2014 Projects of the Year.

The awards will be presented publicly during the CFA’s Annual Convention, to be held in Sandusky, Ohio this August. Three private residences and one multi-family project have been selected.

Projects of the Year is a competition held annually by the CFA to increase the recognition of the substantial challenges faced and met by today’s professional cast-in-place concrete contractor.

“These projects represent the leading work across the breadth of cast-in-place concrete solutions produced by association members,” notes Jim Baty, managing director for the CFA.  “They demonstrate the technical challenges overcome by the professional craftsmen found throughout North America and continue to set a new standard for quality and technological achievement for the cast-in-place industry.”

Categories for the competition are Single-Family Residence less than 2,000 square feet, between 2,000 and 5,000 square feet and greater than 5,000 square feet; and Commercial/Multi-Family. Projects submitted this year represent a broad cross-section of the continental U.S. According to Baty, many of the submissions represent the best projects ever submitted to the CFA.

This year’s Overall Grand Project was completed by Hottmann Construction Company, Inc. of Dane, Wis. It is also the winning entry in the single-family residence category for 2,000 to 5,000 square foot projects. Peers viewing this project during the World of Concrete display of entries repeatedly noted they thought this foundation for a new home in Madison was that of a swimming pool. A closer look at this project reveals that it is not only a house foundation but part of a strong architectural aesthetic that pays homage to the rich heritage of its historical setting.

The house in essence is a garden wall, representative of the likelihood that 100 years ago, a garden wall could have sat here. As the neighborhood grew and filled in, the homeowner wanted to reimagine how the home played a role in neighborhood history. And, while embracing a progressive architecture style, the home is faithful to the eternal spirit of the site itself.

The architect for the project, Eric Richey of Thomas Phifer and Partners of New York, N.Y., noted that their “desire was to extract the sequential experience of these spaces and ground these spaces independently to the landscape. A byproduct of this decision-making maximized the amount of natural daylight and views into each space of the house. The shape is expressed by the foundation images and defined the spaces much like organic garden walls. Our desire to connect the house to nature and maintain the garden-like quality of the site was well received by the surrounding community.”

The pictures of the curves in this house explain this better than any words. The longest “straight” wall is 15-feet (at the garage doors). The entire project also has a brick ledge around it and the curves prevented the use of a traditional blocking system. The major complexities were the shape, as well as a forming system that consisted of three layers of ¼-inch Luan plywood as the forms.

The total area of the foundation is 2,938 square feet. Concrete totaled more than 170 cubic yards in the walls and footings with nearly five tons of steel. The challenging walls with brick ledge throughout were 5 feet, 9 inches and 8 feet, 9 inches in height and all were 11 inches in thickness before the ledge reductions.

*Ed. Note: An expanded story featuring this project will appear in the June/July issue of Concrete Contractor magazine.

Entered by Basement Contractors of Edmond, Okla., this year’s recipient of the Project of the Year for commercial and multi-family projects is a complex and impressive foundation system for condominiums in an urban setting in Oklahoma City.

“The original plan called for a half walk-out basement,” stated Mike Hancock, president of Basement Contractors. “We proposed a full walk-out basement that reduced the project cost by $100,000 from the original design. We then provided full engineering details for making the changes.”

The project consists of more than 9,200 square feet of area and incorporated 360 cubic yards of concrete with 17.5 tons of steel. A variety of wall heights from 2 feet to 10 feet and thicknesses from 12 inches to 22 inches were required.

“The primary reason we proposed this change to the builder,” stated Hancock, “was to give them the advantage of safe rooms for each of the condos located here in the heart of ‘Tornado Alley’. Seven safe rooms were built into the foundation with varying wall thicknesses and odd forming heights of 8 feet 4 inches and 9 feet 8 inches.”

Setting up the forms for the offsets, wall thickness variations and the monolithic “lids” for the safe rooms was the biggest challenge for this contractor. The odd wall heights made the forming module a challenge and incorporated a tremendous number of fillers from their inventory. “This was a much larger scope for us but a better solution for the customer along with the added benefit of safe rooms for their tenants,” stated Hancock.

The project award this year for foundations under 2,000 square feet goes to Herbert Construction of Marietta, Ga. for a very complex foundation system that accommodated severe elevation change and complex forming heights for such a relatively small footprint.

Most projects of this size are simple, straightforward foundations. The overall dimensions of the house were merely 39-foot wide by 68-foot-6-inches deep.  However, the sloping lot made this a challenging foundation to construct.  From the top of wall in the front, to the top of footing in the rear, there were 31-feet of vertical change.  This drop in elevation in just 62-feet equates to a slope on the site of 2 to 1 (2:1 slope). To make things more difficult, rock was encountered during excavation. This made the construction of the footings more challenging.

“With a multitude of steps in the excavated grade and the steep drop-off of the site, there weren’t many areas to place our form baskets,” stated Doug Herbert, president of Herbert Construction. “When the baskets were placed on level plateaus, they hindered the wall crew from setting the wall forms efficiently.  When we stripped the wall forms, many had to be hand-carried up several plateaus to get them back into the form baskets.”

The project totaled only 1,782 square feet with nearly 100 cubic yards of concrete and 3.25 tons of steel. A total of ten different wall heights were required in this complex foundation ranging from 3 feet to 15 feet with four variations in thickness from 8 inches to 14 inches.

“To us, the success on a project like this is found in two critical steps,” stated Herbert. “The first is working with the client and devising a cost-effective way to construct the foundation of interest, producing a CAD plan for all geometries.  The second is to consistently layout and check the foundation with robotic total station layout instruments from excavation to final wall plumbing. This was crucial on this project because of the numerous elevation changes. Without these precision instruments, the layout would have taken three men over six hours to layout the footing, and then another five hours to layout the wall. The robotic total stations were more accurate and much faster than convention layout with measuring tapes and string lines.”

The final project to receive recognition this year represents the large-scale single-family residences over 5,000 square feet category. Basement Contractors from Edmond, Oka. submitted this challenging project that consisted of complex footings, tall foundation wall heights, concrete floors throughout all levels and a gymnasium on the basement level with foundations supporting a pre-engineered metal structure.

“Our involvement was based on being the only contractor in this area that was capable of delivering the entire project,” stated Hancock. “From engineering to coordination of the floor joists including excavation, coordination of waterproofing, drainage, concrete, walls and all flatwork including decorative elevated concrete decks, we delivered a complete package for this complex structure that included details more commercial like in many regards.”

At more than 10,700 square feet, this residence incorporated 643 cubic yards of concrete in the footings and walls. Additional concrete was incorporated to the flooring for each level and several elevated decorative concrete decks, including a continuous deck the full length of the back of the house. The walls and footings also required 33 tons of steel with wall heights of 6 feet and 14 feet ranging in thickness from 10 to 14 inches.

“The owner of this house desired a full-size basketball court to be accessible from the lower level of this walk-out basement,” stated Hancock. “The foundation walls supporting the steel building had exacting tolerances with numerous anchors set in the top of wall for connection and support of the steel frame. The walls were also designed as moment-resisting foundations for the structure.”

The CFA Projects of the Year is a challenging competition that publicizes the craftsmanship and creativity of the cast-in-place concrete industry that largely goes unnoticed or unseen. It is free to CFA members and brings to light the quality and accomplishments that happen daily in the concrete industry, many which become quickly covered never to be recognizable or appreciated within the final product.

The MudMixer® is the fastest, easiest, multi-use mixer on the market. Featuring a fully-adjustable water input designed to be used with concrete, mortar, or stucco mix – it quickly and effortlessly provides reliable consistency wherever it’s needed.
MudMixer
April 21, 2021
Follow Us