The EagleBurgmann facility demonstrates the successful use of multiple tilt-up techniques, including spandrel panels, ribbon windows and punched openings 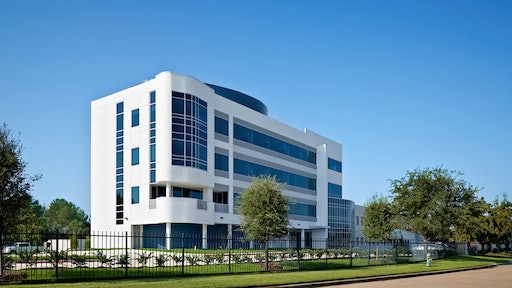 To meet aggressive budget and schedule constraints, the architects redesigned this project from conventional construction to the first four-story tilt-up project in Houston with no reduction in aesthetic appeal.

Winning both a 2013 TCA Excellence Achievement and fan favorite award, this tilt-up concrete project in Houston modified an existing single-story facility with mezzanine with a two-story office addition and room for parking.

This project for a German holding company's American division had the objective of capitalizing on its proximity to a major well-traveled highway to increase the company's presence and brand. The existing facility was a functional single-story industrial box with mezzanine that facilitated. The consolidation of the off-site management arm of the company combined with office space for a recent acquisition had to be seamlessly combined to form the new headquarters. While large enough to accommodate the two-story office addition, the site simply could not also accommodate required parking. Thus, a vertical building allowed for the iconographic expression and the flexibility to seam into the mezzanine level of the factory.

To meet aggressive budget and schedule constraints, the architects redesigned this project from conventional construction to the first four-story tilt-up project in Houston with no reduction in aesthetic appeal. The addition's lower levels include training and vendor spaces on the ground, with factory operations and engineering at the second level, spanning both the new and existing footprints. The new tower offers executive spaces for both divisions with concomitant support spaces. The tower is integrated with the lower factory building with a vertical/horizontal transaction zone - a knot of circulation allowing the floor-to-floor heights at levels one and two to calibrate through soft ramps. The tower's skin is designed with solar orientation in mind.

The north-facing facade, behind which the open-office areas are located, is clad in high-performance curtain wall, while the direct west-facing elevation is punctuated with punched openings that directly index the proportions on the factory building. Most of the closed office spaces reside on this side. Each of the upper office tower levels has a curved balcony for the executive offices use.