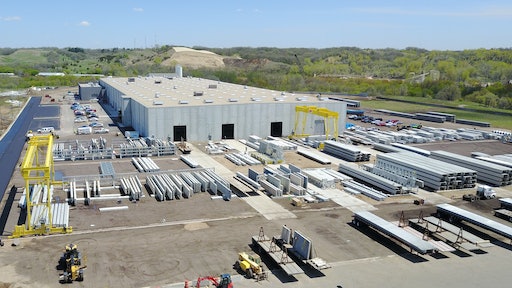 As the COVID-19 pandemic worsened over the early months of 2020, Sioux Falls, S.D.,-based Gage Brothers Concrete Products were tasked to step up production on the construction of a manufacturing facility of N95 masks. The client, 3M Aberdeen was awarded a U.S. Department of Defense contract to increase production.

Local news, AberdeenNews.com, reports the details of the contract:

With a significant amount of monies behind the project, the pressure was on to get the project started and completed quick.

In a stunning turnaround, fabrication started on April 30 and completed on July 17.

As quoted in a Jan. 7 release, “We have the ability to pour several pieces on different beds in the plant at a time, so that when erection starts, they can place many panels very quickly,” says Rachel Swain, project manager at Gage Brothers. The PCI precast concrete producer supplied 200 24-inch-deep double-tees, 60 36-inch-deep inverted tees and rectangular beams, 72 24-inch square columns, and 182 10-foot-wide wall panels.