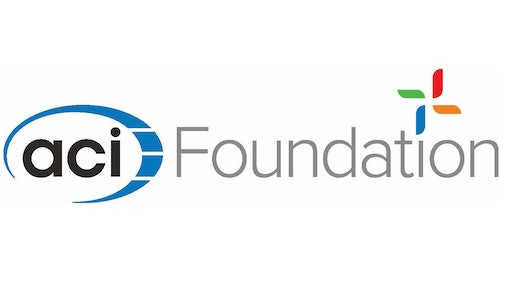 The ACI Foundation’s Concrete Research Council (CRC) selected eight research projects to receive grants this year. The ACI Foundation is committed to progress in the industry by contributing financially to necessary and worthy research.

The following research projects will receive funding from the ACI Foundation:

The large variability of published CT data and lack of a standard CT test method creates significant difficulties for the concrete industry. Researchers cannot compare CT values obtained from their research to a standard value. Practitioners evaluating condition of reinforced concrete structures for maintenance and rehabilitation cannot make a reliable assessment based on measured chloride contents. Designers cannot estimate the service life of their design without a reliable estimate of critical chloride threshold value. Development of a standard critical chloride threshold test with a complete data set regarding its variability will alleviate these issues.

The surface of concrete pavements and reinforced concrete bridge decks are commonly treated with chloride‐bearing deicing and anti‐icing salts during winter conditions to minimize freezing risk. The frequent application of these salts can result in the ingress of chlorides into the concrete. When enough chlorides reach the surface of the reinforcing bars, localized corrosion can occur. The corrosion of the reinforcing bars can ultimately reduce the structure’s service life and result in significant repair or rehabilitation costs. One of the several reported factors that can delay the corrosion initiation of the embedded reinforcing steel in concrete is the chloride binding capacity of the concrete matrix.

The trend towards high-strength concrete and associated high elastic modulus has outpaced specifications, acceptance criteria, and in‐place evaluation guides. Many of the current methods for evaluating in‐place concrete are encountering difficulty when applied to modern high-strength concretes and the emerging requirements for specified elastic moduli are not well defined. Very little is known about the effect of coring on modern high‐strength commercially produced concrete. The researchers and supporters have encountered situations where coring and the application of conventional acceptance rules to in‐place high‐strength concrete has exposed significant differences in expected performance. The researchers suspect that the differences may be due to high self‐generated curing temperatures, differences in curing, or the effect of coring itself, all of which will be investigated by this program.

Current efforts to expand the UHPC market in the United States are focusing on mega bridge deck girders and developing non‐proprietary mixtures for precast/prestressed girders. There has been less focus on UHPC columns and their applications for precast construction. To fill the knowledge gaps here, the PI has recently completed two projects on the behavior of seismic and slender UHPC columns. This new project will expand upon prior work to further assess existing ACI provisions on transverse reinforcement detailing and requirements for applicability for UHPC columns, in both ordinary and special frames.

The proposed research focuses on diaphragm strengthening because the critical lack of data has led designers to incorrectly rely on experimental tests of FRP-strengthened shear walls to justify hLFRS strengthening applications. Engineers and manufacturers need proven methods for the use of FRP to address hLFRS deficiencies related to inadequate chords, collectors, and in‐plane shear capacity.

The objective of the proposed research is the development of simple, rational design equations for the contribution of macro‐synthetic fibers to the shear strength of reinforced concrete members containing at least the minimum shear reinforcement required by ACI 318‐19.

Recently, masonry and wood are replacing concrete walls for low‐ and mid-rise construction, in part because of the increased cost of purchasing and placing reinforcing steel. ACI Code minimum reinforcement requirements for cast‐in‐place (CIP) walls, including maximum allowable spacing and minimum reinforcement ratios, are much more stringent than for masonry or precast concrete construction. These conservative requirements are generally understood to be historic and based on engineering judgment, rather than experimental testing.

CRC seeks concrete research projects that further the knowledge and sustainability of concrete materials, construction, and structures in coordination with ACI Technical Committees where possible. CRC recommended these eight projects for funding, based on impact to industry, ACI Committee engagement and collaboration with other funders and organizations.

Additional information about each of this year’s awarded projects – including additional funding partners, research team, ACI committee involvement, project details, and more – is available at ACIFoundation.org.