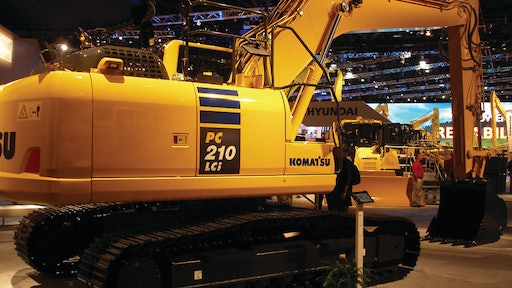 Komatsu showcased a prototype PC2210 excavator at CONEXPO with the integrated grade control.

AGC 2014/2015 Construction Outlook: Private Sector Will Have a Good Year

Results from a recent AGC survey showed the overall majority of respondents saying the overall market would improve this year or next year. Ten out of 11 market segments expect to see more work to bid on as well, especially in the private segments.

While Simonson says the private sector should have a good year, he’s unsure of the public side. While the overall mood was positive, Simonson says he’s worried about the financing of public projects and the lack of taxpayer support for infrastructure investment.

AGC Executive Director of Public Affairs Brain Turmail said that with the economy turning around and demand coming back up, many AGC contractor members are having a hard time finding skilled workers. In order to help solve that issue, Turmail said we need better training opportunities for the young adults. AGC has put out a plan of a series of steps that elected officials could take to help.

"The difference is due to the fact that Komatsu integrated grade control works on rough-grading passes as well as fine-grading passes, which the add-on systems are limited to," said Rick Smith, Komatsu America vice president of marketing. "Integrating the system into the machine also allows it to limit track slip, which contributes directly to increased productivity."

Caterpillar CEO Doug Oberhelman says the economy has a good chance of a modest growth rate in 2014, although it won’t be much of a boom. Oberhelman admits the infrastructure in the U.S. needs help, but the problem is figuring out how to pay for it. He is encouraged by President’s Obama endorsement of a new surface transportation funding package of over $300 billion.

The Cat CEO also sees the increase in renting small equipment as a natural progression as the economy remains uncertain. “As the market recovers we’ll see continued deliveries to the rental fleets. As far as a secular trend of rental substituting for ownership, I think there’s probably an end point on that because a certain number of customers are always going to want to own their machines,” Oberhelman said.

Caterpillar also introduced its new Tier 4 Final machines at CONEXPO 2014, and all the machines meet or beat the NOx and particulate requirements and are five to 25 percent more fuel efficient than their predecessors, Oberhelman said.

A national coalition of associations and labor unions is launching the “Hardhats for Highways” campaign to help educate Congress about the connection between local jobs and federal highway and transit investment. The campaign is encouraging transportation construction firms and their employees to contact their U.S. representative and senators and let them know how many local jobs depend on federal transportation funding.

Co-chairs Stephen E. Sandherr of the Associated General Contractors of America and Pete Ruane of the American Road & Transportation Builders Association said federal highway investments support more than half of all U.S. road and bridge capital improvements each year, and the loss of that investment in FY 2015 would jeopardize hundreds of thousands of jobs in the construction and related industries.

The campaign plans to send out special “Hardhats for Highways” decals to construction and related employers and local unions, and is asking employers and workers to write onto the decal how many jobs at their firms rely on federal highway funding, affix the decal to the firm’s hardhat, and present the hardhat to their local congressman and senators as they encourage them to support new federal transportation investments.

In addition to presenting members of Congress with the special hardhats, employers and employees will be able to send “e-Hardhat” messages to Congress explaining how many jobs at their firms rely on federal transportation funding and encouraging the elected officials to support new federal transportation funding. For more information about the campaign, visit hardhatsforhighways.org.

Dealers can also customize premium packages which may include extended warranties, planned maintenance agreements, fluid sampling, loaner machines, on-site spare parts and other solutions. Additional Ultimate Uptime solutions can be financed with the machine or through revolving credit options.

Research by the Massachusetts Institute of Technology (MIT) Concrete Sustainability Hub (CSHub) shows that pavement-vehicle interaction (PVI) — related primarily to road stiffness and roughness — has a measurable effect on vehicle fuel consumption. That effect is significant over time and thus essential to the analysis of the lifetime environmental impacts of road projects using life cycle assessment (LCA) tools.

The PVI debate stems largely from the variability in previous experimental investigations of fuel consumption on different pavement types. The CSHub’s models help illuminate the key drivers of PVI and allow pavement engineers to incorporate them into their design decisions. They have been used to predict that stiffer pavements could reduce fuel consumption up to 3 percent for the U.S. pavement network — a savings that could add up to 273 million barrels of crude oil per year. This would result in an accompanying annual decrease in carbon dioxide emissions of 46.5 million metric tons.

With the Highway Trust Fund forecast to go bankrupt next year, these findings bolster the case for increased infrastructure spending as Congress prepares to debate a new long-term transportation bill.

Chicago Pneumatic will also be offering its STG power trowels as well as a complete range of concrete and asphalt floor saws.

American Road and Transportation Builders Association (ARTBA) Chief Economist Allison Premo Black says she believes the market will see a reverse in the years-long decline and pullback on spending. The bridge market has seen steady growth in the last five years, reached record growth in 2013 and is expected to continue that growth, Premo Black says.

Other sectors seeing recoveries include ports and waterways, railroads, transit investment and airports – which ARTBA is expecting a significant increase in 2014.  Part of the reason for these positive signs of growth are that many states have initiatives generating additional revenue to help fund these investments.

“We’ve seen overtime the health of state and local economies is one of the best ways to predict how much they’re going to be spending on transportation. We are starting to see a recovery in overall revenues, and that is encouraging,” Premo Black says.

Customers looking for an entry-level excavator with Komatsu durability and reliability can preview the new PC130-11 at the Komatsu booth (N-10825) at CONEXPO-CON/AGG 2020.
Komatsu America Corp.
March 13, 2020

The DX300LL-5 road builder is scheduled to be available in North America in May 2020 and Doosan plans to launch a road builder version of its larger DX380LL-5 log loader at that time.
Doosan Infracore North America LLC
March 12, 2020