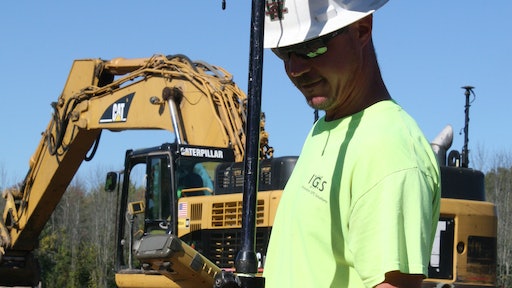 If crews need to check an elevation, the operator can do so from the cab or by using a Topcon FC-500 data collector working off the HiPer II receiver.

“I was previously a superintendent for a contracting firm and saw that we were subbing out a good deal of our earthwork,” says Rogers. “I felt there was enough of a demand for a dedicated mass excavation-type company to warrant starting one. So in 2004, I did just that. We started out with me and two other people, a few pieces of equipment — including a Cat 627B scraper pan — and started working for some of the area’s largest contractors.”

WSE quickly made a name for itself as one of Western New York’s pre-eminent earthwork contractors. Almost four years later, when confronted with an economy that was contracting before his eyes, Rogers actually grew the company.

“That 2008 time frame was interesting to say the least,” says Rogers. “Companies around us were getting smaller or shutting down altogether. Everyone was trying to hang onto their own work at any cost. We were faced with a decision to either close down or fight for the available work — and we knew it would have to be all of it, not just the earthwork. So between 2008 and 2009, out of true necessity, we grew and became the site contractor we are today.”

The WSE of today is a far different company than it was in 2004. In addition to earthwork, it offers a range of services, including land clearing, utility work (sanitary, storm and water), creation of athletic fields, stream restoration and more.

“Since those early days, the infrastructure of our business — the manpower, equipment and technology we employ — has obviously changed to where we can tackle much larger projects,” Rogers comments. “For the mass excavation, we still rely heavily upon a pair of the Cat 627B push/pull-type scraper pans. But we have also invested in excavators, dozers, backhoes, etc., to allow us to be efficient in all the work that we do.

"However, so much has changed compared to the way it was when we started," he continues. "Back then, renting specialty equipment, such as pans, haul trucks, dozers, and so on, was almost unheard of — today it’s commonplace. The project sizes are generally smaller as well, mostly because of restraints placed by the Stormwater Pollution Prevention Plan (SWPPP), and by the Department of Environmental Conservation (DEC). But we’ve learned to adapt and have kept abreast of technology to help us remain competitive.”

One of the steps WSE has taken to maintain that competitive edge is embracing geopositioning technology on the jobsite. The company had its first experience with machine control on a dozer it rented a number of years back. WSE liked its benefits and was soon working with the Rochester branch of Admar Supply to outfit a pair of Cat D6N dozers with Topcon 3D-MC2 and 3-Di (indicate control) systems. It was a huge project in 2015, though, that had them re-thinking the potential their excavator held.

“We were the site contractor for a 50-acre FedEx ground distribution center outside of Buffalo that involved movement of some 230,000 yds. of dirt,” Rogers notes. “Because we were using haul trucks, I felt we could make the cuts completely with the shovel, bypassing a dozer altogether. Evan Spencer at Admar told me that the X-53i system for excavators was designed with mass excavation in mind." WSE tried it and decided to add it to the Cat 345C.

The system WSE took delivery of uses tilt sensors mounted along the bucket, stick, boom, and body to enable complete bucket control at any angle. Because it is GNSS-driven, the software quickly directs the operator to centerlines, and guides the machine’s bucket to grade, saving time and eliminating the risk of over-excavation.

According to Rogers, virtually every application where an excavator is the tool of choice can benefit from their new solution, including utility trenching, major cuts and pond excavations.

“Landscape architects are meticulous today with regard to the aesthetics and functionality of ponds,” he points out. “As a result, they design in features like shelves, aquatic benches, challenging contours, etc. For us to stake out a complex structure like that, we’d need to have lath pounded everywhere, which would make excavation nearly impossible. The [GNSS] system, on the other hand, allows us to work in a stake-free environment. Everything the operator needs — grade, position on site, cut/fill info — is right there in front of him on the screen.”

Rogers adds that removing stakes from the equation has dramatically improved the company’s on-site efficiency. No longer having to work around tight sections of lath or risk running them over brings a whole new level of freedom to his operators.

“We are also capitalizing on our reduced reliance on surveyors. When you are doing mass earthwork, surveyors are also trying to be as efficient as they can be. So they tend to stay out for an entire day, staking everything: the building, parking lot, storm sewer, etc. Truth is, from our standpoint, we only need one area staked out at a time," Rogers states. "If we are boxing out a lot, we don’t need the storm sewer staked out. Now, it’s all in the model and all in the machine and we can access info for an area when we need it.

"If at any point in the project, we want to check a manhole or an elevation," he continues, "we can do so, either from within the cab or by using a Topcon FC-500 data collector working off the HiPer II receiver. From a quality control and efficiency perspective, it beats the old way of doing things tenfold.”

Benefits Even in Mass Excavation

On a recent 10-acre site prep for the Genesee Regional Market in Rochester, NY, WSE needed to clear and grub the site, move 35,000 cu. yds. of dirt, trench for utilities and build a road — in a month. After clearing, Rogers brought his GNSS iron to bear, in many cases using his dozer with 3D-MC2 to direct the scraper pans.

“We’ve really found that, by doing so, we can utilize the benefits of GPS and get the mass excavation benefits of the pans,” says Rogers. “Based on what they’ve done for me since I started the business, I’m a huge believer in those 627B scrapers. Having them work alongside the dozer has really helped us maintain the pace out here. We also have the Cat 345 with the X-53i system excavating for the main utility line that runs through the site. It is about 15 ft. deep, and simply by looking at the screen in the cab, [the operator] will know his depth without having to measure; he can get the invert of where the pipe is, and so on. That part of the job has really been streamlined.”

While Rogers cites GNSS gear as being very user-friendly, he says he's fortunate to have a crew of operators who have taken to the new technology. “I think in most cases, it really comes down to the vintage of operator. The older, more seasoned ones often seem hesitant to learning new approaches to doing things," he comments. "The younger ones are more accepting and trusting of the technology. We are lucky to have younger operators who welcome what the technology can do for them.”

Heading to the Curb

As WSE moves forward, Rogers says the company is already looking at ways to expand its capabilities even further, with curb and gutter work heading the list of possibilities.

“We currently do sidewalks and patios but don’t do curbs, or flatwork for larger buildings,” he says. “I see a lot of potential there, not just as a new revenue stream but also as a way to better control my site. If we need to get a parking lot in and are at the mercy of a curb and gutter contractor who is three weeks out for scheduling, it makes it tough to maintain a schedule and keep guys working. We could alleviate that by doing it ourselves. And I’ve seen that more and more curb and gutter companies are starting to employ GPS in that area, so it would be a perfect complement to what we are already doing. We’ve come a long way in just a dozen years but we’re definitely excited for what’s to come.”

As a GNSS rover, the SPS986 compensates for movement and readings when the receiver is not level. As a base station, it automatically connects and transmit RTK corrections to rovers or machine control systems
Trimble Navigation Ltd.
April 20, 2020
Follow Us