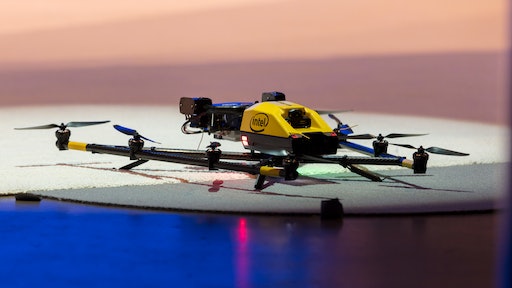 During his presentation, Krzanich introduced new and upcoming commercial drone capabilities that demonstrate the potential of Intel technology. From commercial products like the Intel Falcon 8+ System and the MAVinci Sirius Pro System, to Intel Shooting Star drone light shows for entertainment, Intel has a range of solutions for the drone ecosystem.

This demonstration showcased an automated bridge inspection with Intel Mission Control software, a new application that will facilitate flight planning, management and post-processing, planned for release later this year.

Intel Mission Control software requires a few key parameters to generate a flight plan, mapping an optimized flight path to capture the images needed for a thorough inspection. An inspection mission requires a highly skilled pilot to fly the drone along all surfaces of the structure to capture its many angles, which is then typically replicated six to 12 months later for comparison purposes. Intel Mission Control software, when available, will simplify and automate this process.

In the keynote, a demonstration was shown on how the workflow for a bridge inspection can be automated end-to-end. Once the mission is complete and data is synced, the software starts to transfer captured images and associated positioning information into analytics software so data can be immediately reviewed to get initial insights on site. The keynote demonstration also included an example of this with software from Bentley Systems as part of an automated workflow to generate 3D models from this drone-captured data.

Intel is also working with other leading software providers to similarly streamline solutions to apply insights from images taken from drones tackling challenges facing a range of industries.

To continue advancing commercial drone capabilities, Intel is expanding ease of use for payloads by developing technology that will allow for more flexible payload options. The Intel Falcon 8+ drone has already demonstrated an easy payload exchange and, later this year, will release a new API framework and defined hardware interfaces so customers can add custom payloads. This will allow commercial operators to have the flexibility to pair the best sensor for the job at hand in the future with the Falcon 8+ drone platform.