‘Ransomware became one the highest-profile challenges facing cybersecurity professionals in 2016.’ Knowing why informs how to withstand attack 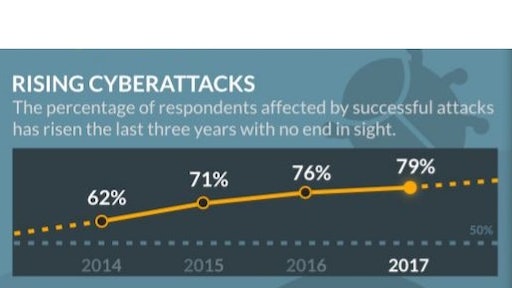 “Ransomware became one the highest profile challenges facing cybersecurity professionals in 2016,” said Tom Field, vice president of editorial at Information Security Media Group (ISMG). “Based on our research, we feel that nothing indicates a slowing down of this problem. In fact, we may have only scratched the surface. With organizations reporting that their own employees are their greatest threat exposure, I expect a drastic increase in training, awareness and vigilance across all organizations in 2017.”
CyberEdge Group

Sixty-one percent of businesses surveyed last year said their computer systems had been attacked by ransomware, according to a CyberEdge Group study.

It unfolds: a message on your computer screen announces that your computer has been hacked. If you want your encrypted files back, the message informs you that you will need to pay a ransom to the hacker.

“The findings of CyberEdge’s latest Cyberthreat Defense Report are consistent with what we are seeing in the industry,” said Mike Rothman, president of Securosis. “There are more attacks, more sophisticated malware and more complexity ahead relative to skyrocketing cloud usage.”

Not surprisingly, the greatest consequence of ransomware was significant business disruption, according to Information Security Media Group (ISMG). Fifty-nine percent of victims said their businesses had been disrupted by the attacks. And 28 percent said their reputations had been damaged.

Key to the growth of security breaches has been the proliferation of “ransomware-as-a-service,” according to Bill Conner, CEO of SonicWall. The term refers to ransomware-to-go software packages, which are easy to buy on the web. They make it simple for criminals, even those with extremely limited technical knowledge, to become hackers.

Also contributing to ransomware’s rise has been the growing reliance on the internet of things, or devices businesses have connected to the internet, such as surveillance cameras, phone systems, security systems, smart terminals and smart vehicles. Turns out, the computer software on those devices is by-and-large unsecured.

With a majority of organizations already victimized, it is imperative to marshal your cyber defenses. Find out more about the best practices recommended below at ConstructionBusinessOwner.com:

Why Construction Companies Should Educate Employees About Cybersecurity