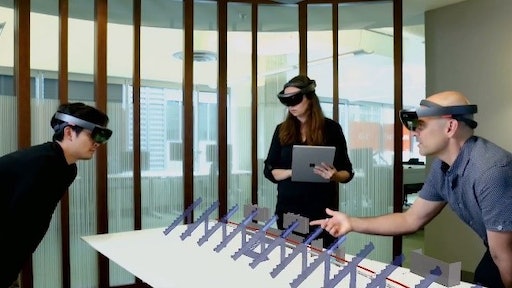 [VIDEO] Synchro to Be Used on FC Barcelona Stadium Project

Greg Demchak, technical architect for Bentley, said, “The scope of this project demands that we look for new solutions, and for this, we turned to Microsoft. Using Azure infrastructure, HoloLens technology, and Cognitive Services, multiple users can interact with a holographic representation of the stadium data at any moment in the construction process. We are also leveraging machine learning and on-site images to digitally track actual progress with Synchro.”

Bentley Systems is a Mixed Reality and CityNext partner with Microsoft, and will receive the 2018 Microsoft CityNext Partner of the Year Award during this year’s Microsoft Inspire Conference for its Azure-enabled software solution for Mass Rapid Transit Corporation’s world-class, Sungai Buloh-Serdang-Putrajaya high speed railway project in Malaysia.