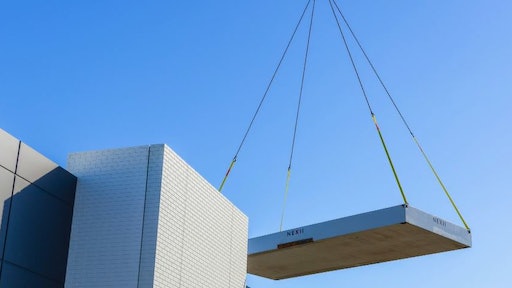 Nexiite is a concrete-like material made without Portland cement or lime, but does include water, sand and a mix of materials.
Nexii

Nexiite, the material the company manufactures, is more thermally-efficient and less carbon-intensive than concrete, Nexii says. When assembled, the panels create an airtight building envelope, minimizing thermal bridging, for a lower impact on the environment. This combination aims to improve a building's energy efficiency, lowering its greenhouse gas emissions.

Watch the video of Nexii helping to construct a sustainable Starbucks in Canada in six days:

Nexiite is a concrete-like material made without Portland cement or lime, but does include water, sand and a mix of materials, company CEO Stephen Sidwell said in a recent interview. The material is constructed from sealed layers of cement and insulating material. The panels are water, fire and disaster resilient and contain no dangerous building materials. The finer details and specifications remain a company secret.

The material was invented by brothers Ben Dombowsky and Michael Dombowsky, who have backgrounds in construction, design and research.

Manufacturing Plant in the U.S.

Nexii announced in July that it planned to open three manufacturing plants in North America:  one in Alberta, one in Toronto, Ontario in Canada and another in Pennsylvania. The company has factories in operation in Moose Jaw, Saskatchewan and Squamish, British Columbia in Canada, which this time last year were expanding. The new plants will help meet growing customer demand, the company says.

The Pennsylvania plant, in Hazleton, will serve the northeast markets, including New York City, Philadelphia and Washington D.C. John Wolfington of Nexus 1, a real estate developer, will invest up to $30 million (Canadian dollars) for the development of a production facility that will manufacture green building and retrofit products and create over 180 full-time highly skilled jobs in the area.

Development of Nexii’s Pennsylvania plant began in September 2020, with the plan to be operational in the first quarter of 2021. It's expected the Pennsylvania plant will be able to produce over 8 million square feet of building panels every year.

Nexii announced that F. William McNabb, former chairman and CEO of investment advisor Vanguard, has joined its board of directors as vice chairman, to help scale the company.

“Nexii’s approach to tackling the climate crisis and reinvigorating economies with green technology is exactly where we need to be right now,” McNabb says. “Facing a global pandemic, devastating hurricanes, fires and floods, amidst a housing crisis with tens of thousands of buildings needing critical retrofitting, we need innovative companies like Nexii to pave the way forward.”

In addition, Ronald Sugar, chairman of Uber Technologies and board director at Apple, is joining Nexii’s board. Sugar has served on the company’s advisory board since June 2020.