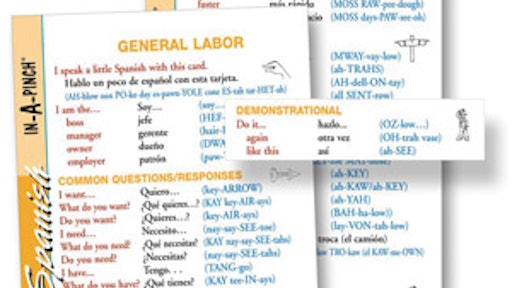 The number of Hispanic and Latino workers employed in the construction industry is on the rise. Official numbers from the U.S. Department of Labor report 14.2 percent of workers in construction and extraction trades are of Hispanic or Latino ethnicity, but other sources say numbers are much higher. The language skills of Hispanic and Latino workers varies greatly - some workers have lived in the United States all of their lives and grew up speaking English; others are more recent immigrants, both legal and illegal, and have limited to no English-speaking skills. As construction business owners struggle to ensure a safe and productive work site for all their crew members, they will find that focusing on bridging both language and cultural barriers is the most effective way to do so.

Cultural differences
Tim Roorda, communications director with Zerah Services, Inc., a company that offers construction business owners resources for cross-cultural communication, says that Zerah's research has found about 35 percent of workplace problems are caused by language barriers while 65 percent are caused by cultural differences. While Spanish-speaking workers in the United States are from many different countries, and therefore many different cultures, the majority of Spanish-speaking workers on U.S. construction crews are from Mexico. Roorda offers a few lessons in understanding Mexican social culture that can help you and your crew leaders better relate to Spanish-speaking workers. Some are simple adjustments that supervisors can make or should be aware of on the jobsite, such as the knowledge that in Mexican culture finger-pointing is considered rude. Other issues are more complex and require ongoing consideration.

Roorda says that people in Mexico are generally very courteous and managers should consider this in their everyday interaction with Mexican employees. "Young children in Mexico learn about manners and respect from their parents; the concept of human dignity and how you treat a person matters greatly to them," Roorda explains.

Roorda speculates that most Americans don't think of saying "thank you" and "please" as signs of showing people respect, but he asserts that these expressions are simple tools that are of great use in communicating with Mexican workers on the jobsite. "The phrases let them know they are appreciated for their work," Roorda says. "It's a form of respect that Mexican workers hear."

Safety is serious business on a construction jobsite. Roorda says when it comes to safety, American and Spanish-speaking workers have different motivations to practice on-the-job safety, and knowing these differences will allow supervisors to help workers to realize safety's importance. "It took this country a long time as a culture to understand safety, and building that safety culture was hard," he says. "Then to bring in another culture can be very difficult."

Roorda explains that American society is very individualistic - many Americans believe that their actions determine their own fate. But Mexican society is a medium to high collectivism culture, meaning people believe that if they take care of their group, their group will take care of them. Roorda says that while supervisors convey a need for on-the-job safety to American workers by emphasizing personal health and safety, they should convey to their Spanish-speaking workers that they need to practice on-the-job safety for the sake of their families and the construction crew.

Bridging the language barrier
Understanding and respecting cultural differences can help create a productive and harmonious working environment, and effective jobsite communication can help to better that environment in many ways. Community language classes and Spanish-to-English/English-to-Spanish dictionaries are widely available to most people, but they're not necessarily the most effective paths to learning English skills that are useful on a construction site. Construction-specific Spanish-language resources are available through many concrete and construction industry associations, including manuals, safety guides, training DVDs, and vocabulary and phrase books. There are companies, such as Zerah Services and 2nd Language Success, that offer construction-specific language courses, translation assistance and other cross-cultural communication services. Additionally, there are several language products geared specifically to the construction industry that teach users vocabulary commonly used on the work site.

When an English speaker and a non-English speaker have something to say to one another on the jobsite, there isn't always time to run back to the office for a translation dictionary. For times when communication needs are immediate, 2nd Language Success has developed a series of portable, laminated vocabulary cards fine-tuned to both the concrete industry and the construction industry in general.

Deby Jones, founder of 2nd Language Success, explains that the "Spanish In-a-Pinch" and "English In-a-Pinch" products use a unique approach to help people communicate even if they have no experience in speaking a foreign language. "The Spanish In-a-Pinch cards are like a cheat sheet for learning Spanish," she says. "They offer the user English words to best pronounce the Spanish."

For example, an English speaker using a Spanish In-a-Pinch card will see the phrase "My name is ... " followed by the Spanish translation "Me llamo ... " and the English-based phonetic pronunciation "may YAH-moe ... ."

"The cards get people communicating on the jobsite, and they break down the No. 1 factor people must overcome when speaking a new language, and that's fear," Jones says. "You might not be speaking Spanish perfectly, but people can understand what you're saying. When a crew of workers receives its English In-a-Pinch cards, they can start speaking to each other immediately. This creates a work environment that's safer and more efficient, and all-around better."

Jones says the cards can help a business owner determine which members of his or her crew might be worth investing in for advanced language courses. "You can throw a lot of money into language programs and classes, but if workers aren't interested in learning, you're throwing a lot of money away. If you give crew members these cards, you will see who uses them and is excited about learning and might benefit from language classes or other programs," she says.

Spanish In-a-Pinch and English In-a-Pinch cards are available in a wide range of topics, including safety, human resources, employment application, payroll and speaking to an employee's family on the phone.

"While some employers do offer ELS (English as a second language) courses for their employees, they often fall short because the content is generic, and scheduling makes it almost impossible for workers to attend and meet the demands of the job and family," says Steven Kramer, vice president of the residential construction academy of the Home Builders Institute, an arm of the National Association of Home Builders. "The technology and portability of Sed de Saber overcomes these challenges to learning by enabling the worker to study an industry-specific curriculum off-the-clock, at his or her own pace.

"We're excited about what this will mean for the overall construction industry, especially from a safety standpoint," Kramer adds. "There are OSHA statistics that say about 25 percent of construction site accidents occur because of a language barrier, and we're really hoping to bridge that gap."

In addition to construction industry specific language information, Sed de Saber also teaches users helpful non-jobsite related skills such as introducing yourself or opening a bank account. A similar program has been in existence for the hospitality industry since 2005, and Kramer says it has shown some promising results.

"In the hospitality industry, it has been proven that employees you are willing to invest in with language skills are willing to stick with the company, and there's evidence of reduction in turnover for employees who go through this program," he says. Kramer adds that users showed a 40 percent increase in English retention in a test pilot they ran with the Sed de Saber Construction Edition before it hit the market.

"There are guides and videos that come with the product that help the business owner engage his or her employees, keep them engaged and encourage them," Kramer says. "Making that initial investment in an employee goes far, but praising them, giving them feedback and encouraging them will help them succeed."