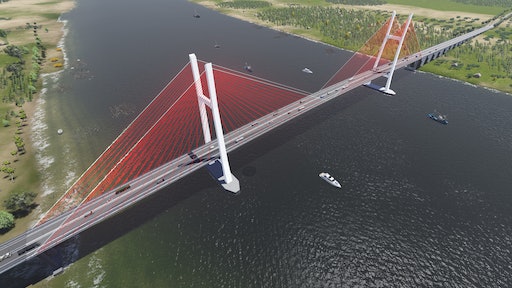 The 2010-meter cable-stayed Cao Lanh Bridge model will be used for shop drawings production and play an important role in the operation and maintenance after the completion of the bridge, scheduled for 2017.

The award categories and winners are:

The new headquarters of the financial services group OP-Pohjola in Helsinki, Finland, is a multi-material building with a complex, sloped precast concrete and glass facade. A collaborative group of companies led by Sweco modeled the building in several locations, while designers and contractors followed design progress with the model’s design statuses. Several project parties used models for clash checking, hole reservations and visualizations, and chose object-based quantity take off and scheduling plus coordination with BIM.

The River Vantaanjoki Bridge in Finland by Siltanylund Oy and Destia Oy included design and construction of a new road, bridge structures crossing the river Vantaanjoki, pile slabs, an underpass and an associated trough. In addition to cast in place structures and reinforcement, the project parties modeled the roads and earthworks and utilized BIM in checking and approval process, and onsite.

The multifunctional Torun Concert Hall in Poland by Fort Polska is a geometrically complex building consisting of five modules, of which two can be joined to create a larger space various types of events. The hall has inclined load-bearing concrete walls below partially movable ceilings made of hundreds of polymorph faces angled together. Without BIM, mapping this architectural thought would not have been possible.

The partially retractable roof of the Singapore Sport Hub by Arup spans 310 meter, making it the largest free-spanning dome structure in the world. Collaborative design using 3D modeling techniques between the architectural vision, venue designers and the structural engineering team resulted in a highly buildable roof that is extremely efficient, lightweight and sophisticated.

The 2010-meter cable-stayed Cao Lanh Bridge in the river Mekong delta in Vietnam was created by VTCO Investment’s team of new Tekla users. The bridge model will not only be used for shop drawings production, but also will play an important role in the operation and maintenance after the completion of the bridge, scheduled for 2017. The bridge was the clear favorite of over 3500 online voters.