Weather Proves No Problem for GNSS on Bridge Replacement Project 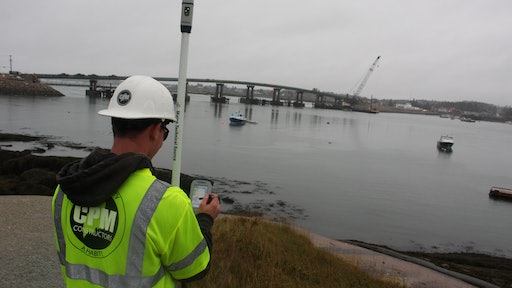 Home to just over 500 Maine residents, the town of Beals is located on a 5-square-mile island across from moderately larger Jonesport. To access either town by car from the mainland, residents and visitors must cross the Jonesport-Beals Bridge, a half-mile span built in 1958.

After more than six decades of service and constant exposure to the salt air of the Atlantic, the structure’s pier piles were identified as deteriorating, prompting the bridge to be classified as “structurally deficient” and slated for replacement.

CPM Constructors, Freeport, ME, is heading up construction of a new $22 million span. While it performs everything from marine construction, to power station work, to roadbuilding, the contractor has established itself as one of the state’s go-to sources for bridge construction.

“We probably have anywhere from seven to 10 bridges going on at any given time,” says Ken Sienko, CPM’s survey manager. “That can include structures designed to carry vehicles, railroads, pedestrians, you name it.”

For years, CPM Constructors relied on its existing robotic total station and GNSS technology. But with the Jonesport-Beals Bridge project located in an area traditionally hindered by foggy coastal weather, it chose to invest in a new Sokkia GCX3 GNSS receiver and an iX503 robotic total station.

Work on the project began in September 2017. In addition to the structural construction itself, CPM was responsible for all the earthwork at the approaches, the abutments and all adjacent roadwork. Structural work started with driving of piles, which immediately drew upon the advantages of the new GNSS solution.

“Working alongside Case Foundation, we first located the centerline of bearing for two H-piles welded to the deck of a barge and pushed the barge into location to set a temporary frame to drive the pile,” says Taylor Light-Surek, CPM’s field engineer. Next, a larger driving frame was set to hold the caissons onto the header of the initial driving frame. “Then, while standing on the deck of the barge, I shot center line of bearing and center line of construction and used those points to guide the upper driving frame into place where it was welded and braced off.”

This seemingly simple process was complicated by weather, which tends to be very erratic. “There was one month in which we had 20 separate days of dense fog with visibilities less than 1/8 mile,” says Light-Surek. “Most of the shots I’ve been taking out here are between 700 and 1,500 ft. We obviously couldn’t use a robot in those conditions, so we turned to the GNSS solution.”

Light-Surek was impressed with the tight accuracies achieved given the conditions. “I shot a number of points with the base and rover and then checked them the next day using the robot and it was within hundredths,” he states.

Light-Surek quickly recognized other benefits, as well. “Our older equipment is so much heavier,” he says. “You don’t think it’s much of a big deal until you are out here for 10 hours a day walking around with a rover. Walking back and forth doing centerlines carrying a 10- to 15-lb. rod definitely wears on a person.

“By comparison, I can literally put everything I need now in a backpack,” he continues. “This system takes me about 10 minutes from the time I get a call that someone needs a shot to the time I’m there and working. In the past, that could have easily been twice as long, so there’s a time savings at work here with the new solution, as well.”

Sienko had a particularly unique opportunity to benefit from the compact nature of the GNSS solution when working to streamline placement of the structure’s pier caps.

“We are having a Virginia-based company called Coastal Precast Systems do all the precast caps,” he says. “I recently flew down to their plant and, using long-range Bluetooth, set up the base in their yard and recorded all the as-builts for the caps right there. By doing so, when we went to place them here in Jonesport, all the rebar coming up out of the columns lined up perfectly with the holes.

“It worked out really well, but was made even better by the fact that I didn’t have to lug several cases of bulky equipment to get those results,” he adds.

Though reduced to one lane, the existing Jonesport-Beals Bridge has remained operational while the new structure takes shape. This has allowed CPM to fully appreciate the benefits of the GNSS and robotic solutions.

“We used both our previous system and the new one out here at different times and there really is no comparison in terms of signal acquisition,” says Sienko. “Our older GPS receiver really struggles to keep a connection, particularly when we are close to the existing bridge. Unfortunately, that’s where most of our work takes place. As a result, when using the older solution, we would have to stay a good 30 ft. off from the bridge.”

In contrast, the GCX3 provides the ability to get a fix on the satellites while almost directly under the structure.

“We were working at times between several barges and the bridge,” says Sienko. “Even though I could probably only see 20% to 30% of the sky, we were still able to get, and hold, a fix on between 10 and 14 satellites. That was enough for me to keep my residuals within a half-inch.”

Both Sienko and Light-Surek will attest that time spent waiting for technology to work is time wasted.

“The most obvious savings is in data acquisition,” says Sienko. “When we had work near the bridge with the old system, there were times when Taylor was spending very long periods waiting to get a fix. In fact, when I first brought the new GNSS receiver to him to do a side-by-side comparison, he told me he’d have a fix with that older unit in 20 minutes; I already had one. So for us, the time savings is really in how fast it can grab a signal, and that’s been substantial.”

Light-Surek was also required to do centerlines provided by the office, which can consist of roughly 25 to 30 points. “With the Sokkia, I have a fix for each point in about three seconds. In the past, I’d have to wait a minute and a half for each point,” he comments. “While that might not seem like much, when you add it up, you’ve suddenly lost three-quarters of an hour just waiting.”

Performance differences were also seen on a more basic level. “Our older system had a tendency to freeze up in cold weather and, being Maine, there’s no shortage of that,” says Light-Surek. “Waiting for a unit to respond is a huge waste of time. But this past winter, we ran both the new receiver and the new robot in subzero temperatures without seeing any adverse effects on performance.”

For CPM, the process of moving into the newer solutions was not without its hurdles.

“We decided early on that we wanted to boost satellite coverage by adding the Galileo Constellation package,” says Sienko. “But we quickly realized that we had an issue getting the unit to see those satellites.”

Pat Moran, the Sokkia regional manager, came out on site and worked with CPM until the problem was resolved. “We are currently averaging about 22 satellites at all times,” says Sienko. “The new solutions have been key in helping us keep pace on this job and it’s great to have that level of support from both the manufacturer and the dealer to back it all up.”

The Jonesport-Beals Bridge is slated for a late-2019 opening.

To expedite the transfer of files, implement updates and so on, CPM Constructors’ crew is using Topcon MAGNET (Field and Enterprise) in conjunction with the Sokkia SHC500 and SHC5000 controllers. According to Taylor Light-Surek, the software solution has fit into their operation nicely.

“I started out using a different software here and as far as functionality and ease of use and being able to switch tasks on the fly, MAGNET is far ahead of what that software had to offer,” he states. “There are a number of functions that have impressed me, but I really like the opportunity to create layers. I’ve probably taken at least a thousand shots on this site and having that many points in a relatively small area can make things look extremely crowded. So, it’s really nice to be able to go into the new software, layer all those points, then turn individual layers on and off, letting us see only what we need to see.”

CPM’s Ken Sienko adds that the MAGNET Enterprise function has also proven key for the transfer of information to the office, which situated roughly 3 1/2 hours from Jonesport.

“If our office was a 15-minute drive up the road it would be no big deal — but it’s not,” he said. “So, that function is invaluable for us. If Taylor needs a point, I can calculate it in the office, shoot it to him and it’s done. In the same way, at the end of the day, he simply uploads his data and I can review it in real-time in Freeport. It doesn’t get any easier than that.”

Entry-level, simplified version of Siteworks Software for users who do not require a full feature set and are interested in a lower-cost version to connect to GNSS only.
Trimble Navigation Ltd.
March 11, 2021