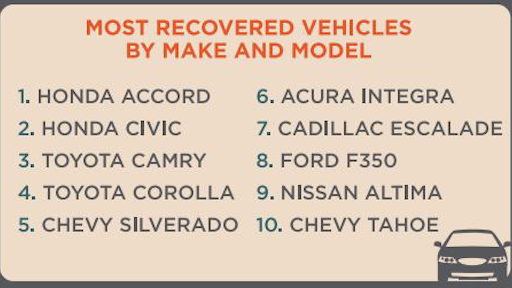 For the fifth year in a row, the Honda Accord was ranked as the most stolen and recovered vehicle equipped with LoJack. California continues to top the list as the state with the most LoJack-equipped recovered stolen vehicles.

Most Recovered LoJack-Equipped Vehicles in 2013

“Today’s thieves are highly skilled professionals, and LoJack’s data reveals that stolen cars, trucks and SUVs equipped with the LoJack system were recovered 90+ percent of the time in 2013,” said Patrick Clancy, vice president of law enforcement for LoJack Corp. “The latest statistics from the FBI indicate that nearly half of vehicles stolen are not returned to the rightful owners, resulting in millions of dollars in assets lost by vehicle owners.”

Top 10 States with the Most Thefts and Recoveries in 2013

Most Stolen and Recovered New 2013 Models

The 2013 LoJack Vehicle Theft Recovery Report is gathered from data provided by 27 states via Nlets as well as California law enforcement, and is specific to stolen cars, trucks and SUVs equipped with the LoJack Stolen Vehicle Recovery System that were recovered between January and December 2013.

LoJack Corporation, the company that invented the stolen vehicle recovery market more than 25 years ago, is the global leader in finding and recovering a wide range of mobile assets including cars, construction equipment and motorcycles-having recovered nearly $4 billion USD in stolen assets worldwide. In today's rapidly changing world, LoJack's core competencies are more valuable and more relevant than ever as they are now being applied into new areas, such as the prevention, detection and recovery of stolen cargo and finding and rescuing people with cognitive conditions such as autism and Alzheimer's.

Don't Be an Easy Target for Equipment Theft

This equipment recovery highlights the importance of installing advanced tracking devices that go beyond the GPS capabilities offered with telematics
June 23, 2016

These tips, which include using common sense, can help deter theft and vandalism on the construction jobsite
December 18, 2015

Four Tips to Minimize the Risk of Construction Theft

Focus on prevention in order to reduce the risk of construction equipment theft
December 1, 2015
Follow Us