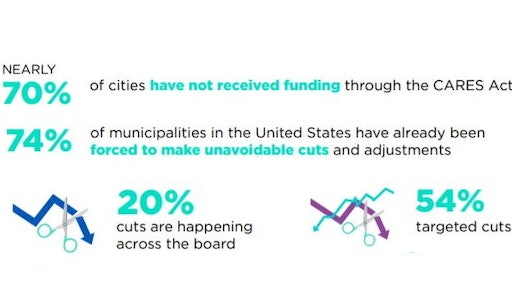 The National League of Cities (NLC) published new survey data from over 1,100 municipalities across the country on the financial impact of COVID-19 on America’s cities, towns and villages. Seventy-four percent of municipalities have already started making unavoidable cuts and adjustments in response to the projected $360 billion revenue loss for cities over the next three years.

“The survey found that 65% of cities are being forced to delay or completely cancel capital expenditures and infrastructure projects, which will not only stifle job growth and slow local economic activity, but further jeopardize economic recovery efforts in communities across the nation," said Clarence Anthony, CEO and executive director for the National League of Cities. "Without congressional action now, the forced delay or cancellation of infrastructure projects will create an economic ripple effect throughout the nation not felt in decades.”

View a one pager summary of the survey results here, a visual representation of the data here, and a blogpost here.

NLC launched the Cities Are Essential campaign, calling on the federal government to ensure there is flexible, direct funding relief to America’s municipalities.