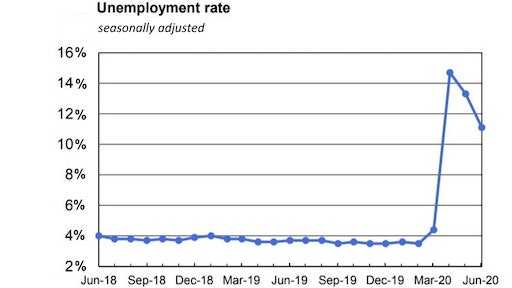 Total nonfarm payroll employment rose by 4.8 million in June, and the unemployment rate declined to 11.1%.
Bureau of Labor Statistics

Construction employment increased by 158,000 jobs in June, but employment related to infrastructure slipped, according to analysis by the Associated General Contractors of America of U.S. Bureau of Labor Statistics data. Association officials cautioned that additional infrastructure-building job losses are inevitable unless the federal government replenishes depleted state and local budgets for roads and other public works.

“The gain in construction employment in June was concentrated in home building, with scattered increases in nonresidential building, while heavy and civil engineering construction employment—the category that includes many highway and other infrastructure workers—shrank by nearly 10,000 jobs,” said Ken Simonson, the association’s chief economist. “Unfortunately, those infrastructure-related jobs are likely to keep declining as state and local governments postpone or cancel projects in order to cover the huge budget deficits they are facing in the fiscal year that began for many agencies on July 1.”

Simonson noted that the association’s latest survey, conducted June 9-17, found that almost one out of three contractors reported a project that was scheduled to start in June or later had been canceled. He added only one-fifth of firms reported winning new or expanded projects, a share that had held steady since April.

A separate survey of more than 1,100 municipalities by the National League of Cities (NLC) found that 74% of U.S.cities, towns and villages have already started making unavoidable cuts in preparation for a projected $360 billion revenue loss expected over the next three years. The NLC survey found that 65% of cities are being forced to delay or completely cancel capital expenditures and infrastructure projects, 24% of cities are significantly cutting community and economic development programs and 13% are making necessary cuts to code inspection, planning, and permitting.

Job losses were milder in the residential side of construction. Residential building firms added 19,100 employees in June but lost 21,000 positions (-2.6%) over 12 months. Residential specialty trade contractors added 64,100 employees last month but lost 63,000 workers (-3.0%) over the year.

The industry’s unemployment rate in June was 10.1%, with 962,000 former construction workers idled. These figures were two and one-half times as high as in June 2019 and were the highest June levels since 2012.

Association officials said the best way to avoid the expected future construction job losses is for federal officials to quickly enact and implement funding for infrastructure, including highway, bridges, waterways and airports. They noted that the Moving Forward Act passed by the U.S. House of Representatives on Wednesday was a first step in that direction but that a more bipartisan approach is needed for funding to become law.

“We urge officials of both parties, both sides of Capitol Hill, and the Administration to come together promptly on meaningful increases in infrastructure funding,” said Stephen E. Sandherr, the association’s chief executive officer. “Without quick action, the job gains of the past two months will be lost, along with the opportunity to start on improving the nation’s infrastructure at a time when labor availability is high and materials and borrowing costs are low.”