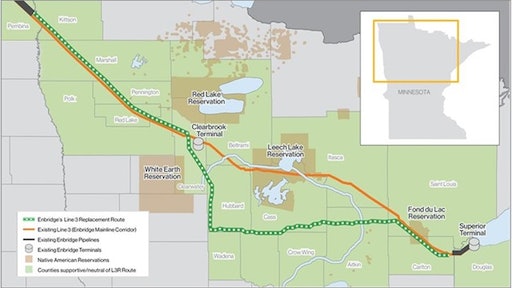 The 36-in. concrete Line 3 will cross 13 Minnesota counties, ten of which were above the statewide average for COVID-19 cases and several seeing spikes in deaths.
Enbridge Energy

UPDATED FEBRUARY 8, 2021: A federal appellate court judge has denied a motion to stop construction of Enbridge's controversial Line 3 replacement, the second court ruling against pipeline opponents in the past week.

The StarTribune.com reports Judge Colleen Kollar-Kotelly in the U.S. District Court for the District of Columbia Sunday denied a motion for preliminary injunction, saying the plaintiffs (two Minnesota Ojibwe bands and two environmental groups) failed to demonstrate a likelihood of success on the merits in their appeal or that they will suffer "irreparable harm" if construction continues.

COVID-19 offers new arguments against some of the most openly contentious construction projects.

Minnpost.com reports health professionals recently joined environmental advocacy groups and several tribal governments in a request to halt building Enbridge’s Line 3 pipeline replacement 337 miles across northern Minnesota, not only because an influx of 4,000 workers living in close quarters increases risk of COVID-19 spread, but also because the health-care infrastructure across the pipeline’s path is already nearing its capacity.

The 36-in. concrete Line 3 will cross 13 Minnesota counties, ten of which were above the statewide average for COVID-19 cases per 10,000 residents in mid-November, which is the most recent data available. Polk County had the highest weekly case rate of those counties at 125.7, which is the eighth-highest in the state.

The Minnesota Academy of Family Physicians and 200 people the organization says are associated with health care signed a petition being circulated by environmental advocates calling for a stay on construction, including doctors, nurses and epidemiologists.

“At this time, a large influx of outside workers has the potential to overwhelm our healthcare system that is already strained with COVID-related hospitalizations,” Dr. Andrew Slattengren, president of the group, said in an email.

Enbridge maintains it can reduce health concerns through a detailed COVID-19 prevention plan, and says that when construction is fully underway, the thousands of pipeline workers won’t all be concentrated in one place.

People will be deployed in “spreads” across the pipeline route, according to the company’s COVID-19 plan. Each of those spreads will have between 35 to 40 crews, with each crew made up of 20 or so workers. The crews typically won’t be at a worksite at the same time, the Enbridge COVID-19 plan says. When one crew completes its work at a site, the next crew will come in to start their job.

(more on the Enbridge COVID-19 prevention plan at Minnpost.com . . . )