Total construction starts year to date are just above the same period in 2019, but single-family starts lag last year’s pace despite unprecedented low interest rates and a storm looms for multifamily building 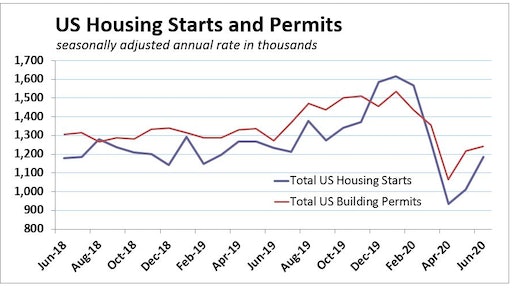 Total U.S. housing construction starts rose 17.3% in June, with both single-family and multifamily starts rising to their highest level since March. Starts more than doubled in the Northeast, as builders finally got back on track following a three-month lull. Activity also rebounded in the Midwest, with overall starts rising 29.3%. In the South, which accounts for over half the nation’s overall starts, activity rose 20.2%. 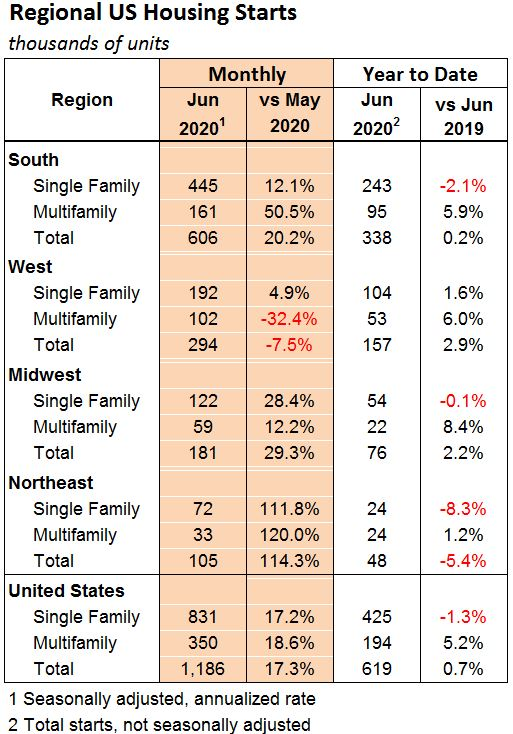 The only regional decline was in the West, where starts fell 7.5%. But that was after leaping 69.8% in May.

Monthly estimates of housing activity issued by the Commerce Department on Friday showed that new homes were started at a seasonally adjusted annual rate of 1,186,000 in June after modest recovery in May followed steep declines in April and March. After a second month of increases, and an upward revision for May, residential construction starts year to date are 0.7% above the same period in 2019.

An Associated Press story on InvestmentExecutive.com reports there were hopes that the lowest mortgage rates in five decades would drive a housing boom. However, surging Covid-19 infections in the South, typically one of the most active construction markets, has put new projects at risk.

“We look for strong demand, improved homebuilder confidence, and an ongoing shortage of supply to support growth in housing starts over the rest of the year, but downside risks are increasing due to the resurgence in Covid-19 cases,” said Nancy Vanden Houten, lead U.S. financial economist at Oxford Economics. The South and West, which are seeing the largest rise in cases, accounted for about 75% of June housing starts, she said.

“While both single and multifamily starts rose solidly in June, we believe that apartment construction is set to slow,” said Mark Vitner, senior economist with Wells Fargo Economics. He points out that permits issued for multifamily projects fell 13.4% in June and are only slightly above their April low. “Moreover, credit underwriting for new apartment projects has tightened, particularly in higher cost areas that are already slated to see an onslaught of new units.

“Apartment starts are not headed to oblivion, however. Activity is actually picking up in many suburban markets in the Sunbelt. On a year-to-date basis, multifamily starts are up 5.2% from the first six months of last year. Permits for future projects, however, are down 6.9% for the same period.”

Meanwhile, the average 30-year fixed mortgage fell to 2.98% in the week through Thursday, reports TheStreet.com. That's the lowest reading in Freddie Mac’s 50 years of tabulating the data.

This represents the third consecutive week, and the seventh week this year, that the rate on the most popular U.S. home loan has hit a record low. It reflects the plunge in bond yields amid the coronavirus pandemic and the Federal Reserve’s reduction of the federal funds rate to a minuscule zero to 0.25%.

“Momentum is clearly swinging back toward single-family homes,” said Vitner. “The recent drop in conventional mortgage rates below 3% should bring out even more buyers, bolstering builder confidence even further. Homebuilder confidence, which was reported yesterday, had already rebounded before the latest drop in mortgage rates.”

The National Association of Homebuilders/Wells Fargo Housing Market Index (HMI) jumped 14 points in July to 72. The increase was driven by a resurgence in buyers, particularly in the Northeast and Midwest. The HMI for the Northeast jumped 22 points to 70 in July—it was just 17 two months earlier. The HMI also rose 18 points in the Midwest (68), 14 points in the West (80) and 10 points in South (73). Single-family starts jumped 17.2% in June and permits rose 11.8%.

“Both numbers are likely headed higher in coming months, but builders are running into some bottlenecks that will likely limit the extent of gains,” Vitner added. “Lumber prices have jumped up to their highest level in two years. Spot shortages of building materials and labor have also emerged due to prior shutdowns and the resurgence in COVID-19 cases in the South.

“Single-family homebuilding has several potent long-term tailwinds behind it. COVID-19 lockdowns have likely encouraged many apartment dwellers already contemplating buying a home to accelerate their timeframe for doing so. More broadly, COVID-19’s severe impact on major metro areas has led some to suggest an oncoming stagnation in urban centers. While these worries may be a bit premature, demographics alone suggest we may continue to see a shift to the suburbs. The movement of folks from higher cost parts of the country to the South, where single-family homes are more affordable and more prevalent, will also boost construction.” 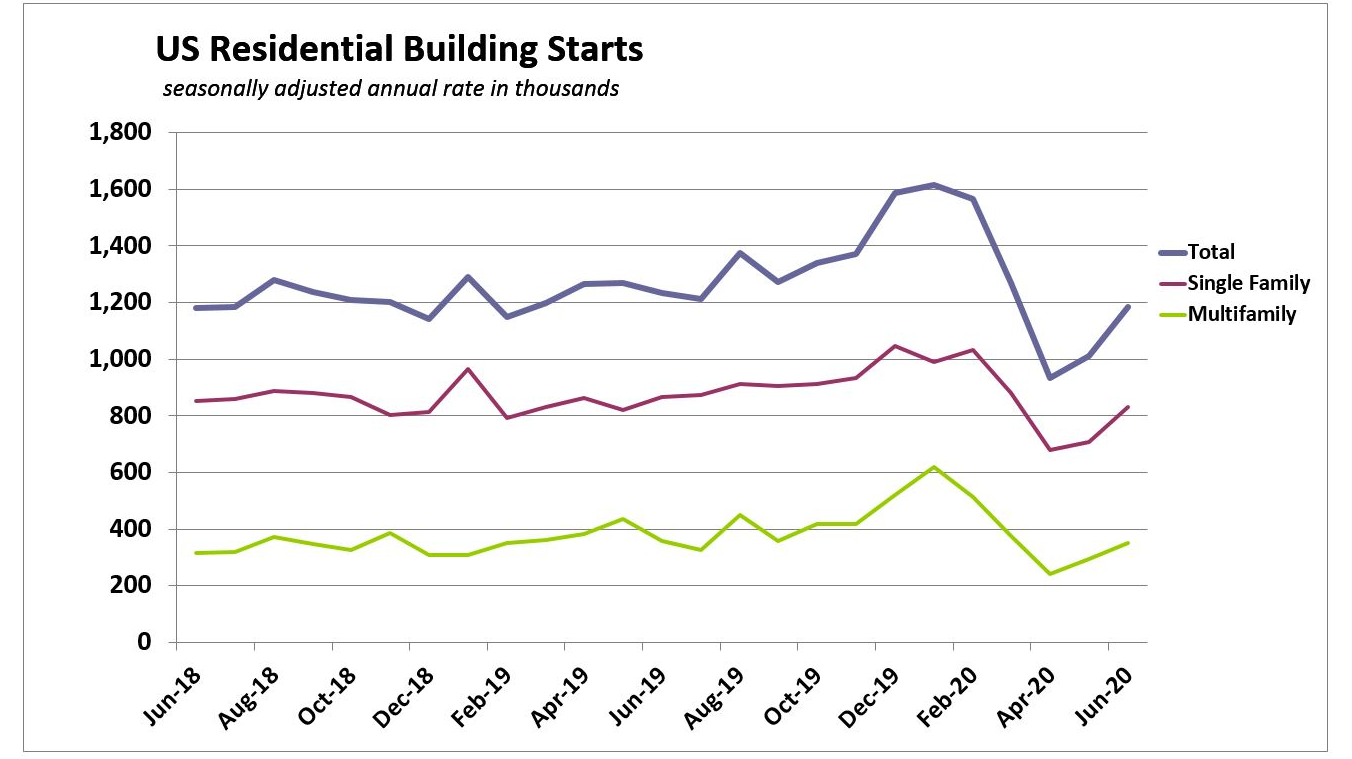