Total value of construction put in place for the month rises on continued residential strength, but the near-term outlook is clouded by persistent pandemic questions 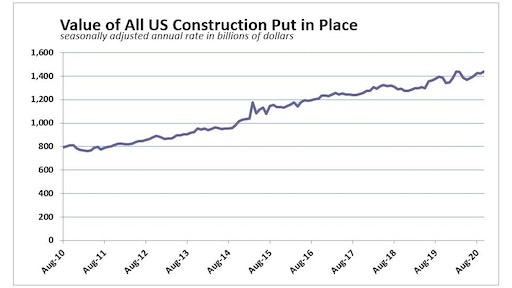 The total value of U.S. construction put in place in October rose 1.3% despite ongoing weakness in nonresidential spending, according to U.S. Census Bureau data. Nonresidential construction spending broke a four-month string of declines by managing to remain flat in October, growing year-to-date just 0.7% growth, compared to the same period in 2019.

Residential construction spending, on the other hand grew 2.9% in October and is up 9.6% year-to-date.

“Excluding some of the emergency construction, such as temporary expansions to healthcare capacity, that transpired in October due to increasing cases of COVID-19, nonresidential construction spending actually declined for the month,” said ABC Chief Economist Anirban Basu. “Spending weakness was broad-based but was especially apparent in private construction segments, such as lodging, office and power.

Private nonresidential spending slipped 0.7% in October, with declines in nine of 11 sectors. Public nonresidential construction is performing about as you expect in an election year, rising 1.0% for the month with notable growth in highway and street, educational and transportation sectors.

“The October spending report shows private nonresidential construction is continuing to slide,” said Ken Simonson, chief economist with the Associated General Contractors of America. “Public construction spending has fluctuated in recent months but both types of nonresidential spending have fallen significantly from recent peaks this year and appear to be heading even lower.”

“Commercial and institutional backlog is down 1.7 months since the beginning of the pandemic, according to ABC’s Construction Backlog Indicator, suggesting that declining commercial activity will eventually become apparent within the spending data,” said Basu.

“The near-term outlook is tilted toward the negative as the economic momentum that has been apparent since May begins to wane. A near-term recession is possible, and perhaps even probable, as shutdown measures are renewed and the impact of previously implemented stimuli continues to fade. That will further delay the recovery of construction spending.

“The longer-term outlook is decidedly more upbeat,” said Basu. “At some point, there will likely be a combination of additional stimuli (including money for infrastructure) and widespread vaccine availability. As air travel, restaurants and theaters begin to rebound, the recovery to come may be more impressive than the recovery that has occurred over the past six months. That should set the stage for better nonresidential construction spending dynamics in 2022 and 2023.”

Spending on new single-family residential continues to pull the U.S. construction train, jumping 5.6% in October and up 5.0% year-to-date. 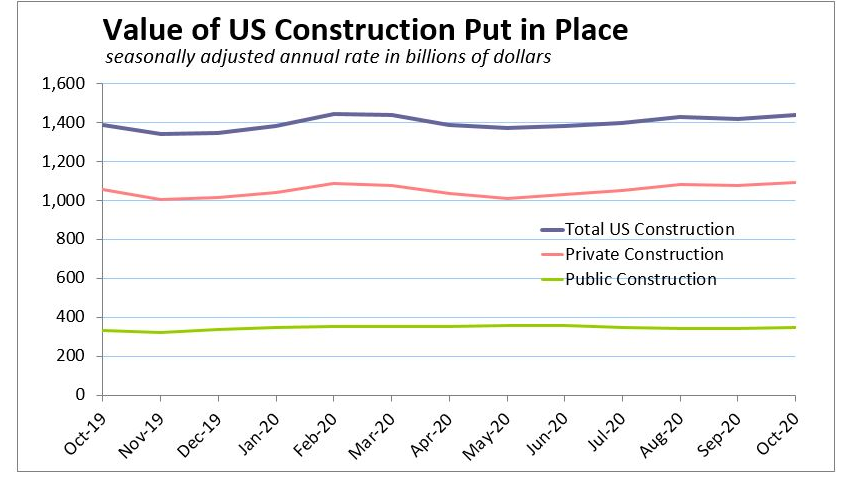