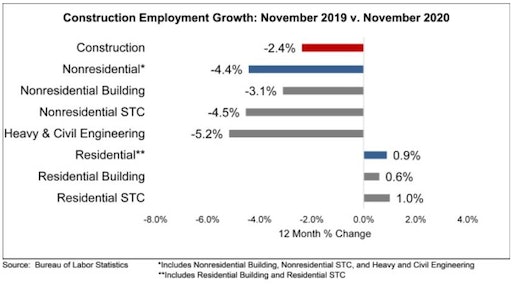 The construction industry added 27,000 net new jobs in November, according to an Associated Builders and Contractors analysis of data from the U.S. Bureau of Labor Statistics. During the last seven months, the industry has added 804,000 jobs, recovering 74% of the losses incurred during earlier stages of the pandemic.

“The construction industry recovered a bit in November, but the future is far from certain for the industry,” said Ken Simonson, chief economist with the Associated General Contractors of America. “The nonresidential building and infrastructure segments are likely to shed jobs again amid an increase in coronavirus case counts unless Congress acts quickly to provide needed relief.”

Construction employment climbed to 7,360,000 in November, an increase of 0.4% compared to October. However, employment in the sector remains down by 279,000 or 3.7% since the most recent peak in February. The pandemic initially triggered widespread project cancellations and interruptions that resulted in the loss of 1.1 million construction jobs in March and April.

The construction unemployment rate rose to 7.3% in November, up 2.9 percentage points compared to the same period a year ago. Unemployment across all industries dropped from 6.9% in October to 6.7% last month.

“The economic momentum that began in May continues to wane,” said ABC Chief Economist Anirban Basu. “While it is true that unemployment declined nationally, this result was largely driven by a decline in labor force participation. America’s labor force has 4 million fewer workers than in February. Based simply on momentum, it is quite likely that one or more of the next three jobs reports will indicate a loss of employment.

“Given that context, the performance of nonresidential construction is rather impressive,” said Basu. “The industry faces numerous headwinds, including weaker state and local government budgets, tighter project financing conditions, compromised commercial real estate fundamentals, supply chain disruptions and project postponements and cancellations. Nonetheless, the nonresidential construction segment has remained a bulwark of relative stability throughout the crisis. It is a point that contractors and industry organizations should highlight as they strive to attract more young people into the construction trades.

“That said, the most challenging periods for the industry likely lie in front of it,” said Basu. “It is normal for nonresidential construction activity to hold up well during the early stages of an economic downturn and then experience a decline in fortunes thereafter. ABC’s most recent Construction Backlog Indicator survey shows that many contractors have sustained significant declines in backlog over the course of the year. Anecdotal information suggests that bidding opportunities for new projects have become scarcer and competition for the next generation of jobs fiercer. ABC’s Construction Confidence Indicator shows that the average contractor expects profit margins to dip over the next six months. If the U.S. economy continues to weaken into and through the winter, that will further postpone the nonresidential segment’s complete recovery.” 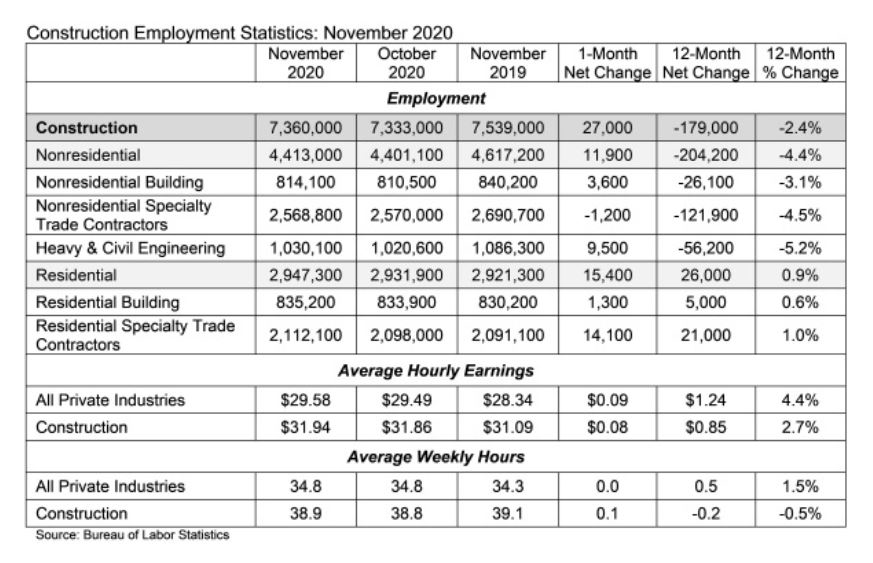