Silica dust from concrete cutting poses health and safety concerns for employees on the job. 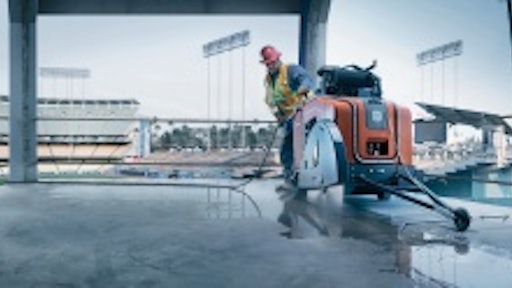 Concrete cutting produces dust which can contain silica, a harmful compound when exposed in air. To keep employees safe on the jobsite, follow OSHA regulations for controlling dust exposure.

Concrete cutting can be a dirty job, often producing a cloud of dust. One element contractors may not think about, or not think much about, is what is in that cloud of dust. Concrete contains a compound called crystalline silica, which when exposed in the air can be a major health concern.

Crystalline silica is a common compound found in many elements including sand, quartz, flint and slate. The silica compound is not hazardous unless it is exposed in the air. This often occurs when concrete is crushed, ground or cut with a saw.

Exposure to airborne crystalline silica can put workers at risk of developing silicosis, a non-curable lung disease caused by accumulation of silica dust in the lungs. The dust embeds itself in the lungs and causes scar tissue to form. The scar tissue reduces the lungs' ability to take in oxygen. According to the OSHA website, "Symptoms seldom develop in less than five years and, in many cases, may take more than two years to become disabling or cause death." Silicosis can also contribute to other health problems such as tuberculosis. Although there is no cure for silicosis, it is preventable if the proper measures are taken to protect employees on the jobsite.

The National Institute for Occupational Safety and Health (NIOSH) has defined the recommended exposure limit for airborne crystalline silica as .05 mg/cubic meter for up to 10 hours per day during a typical 40-hour work week.

The Department of Occupational Safety & Health Administration (OSHA) has specific regulations for concrete cutting and dust containment: regulation 29 CFR 1926.55 Gases, vapors, fumes, dusts and mists. Within that regulation it states employers are required to "avoid" employee exposures to silica beyond the exposure limits and also required to implement controls to minimize or eliminate exposure. If an employer suspects silica dust may be present on a jobsite, OSHA requires that employer to communicate the risks to employees whether or not it is known for sure. It is important to be aware that airborne crystalline silica may be present even if no dust can be seen.

If using a vacuum system, it is suggested that the vacuum be equipped with a HEPA filter for collecting dust.

If engineering controls are not possible, OSHA then suggests improving work practices. Employees who are more knowledgeable about the presence and dangers of crystalline silica will hopefully be more likely to take precautions on the jobsite. Having regular meetings with employees can be a great opportunity to discuss silica dust.

If respirators will be used there are certain rules that must be followed, Stille adds. A written respirator program must be put in place, respirators should never be altered or tampered with, and all employees should be trained on how to properly wear and work with the respirators.

Prevention of silica exposure can start even before the first cut is made. Stille suggests contractors pre-plan all work, evaluating the potential for creation and/or existence of airborne crystalline silica. If exposure is present, she says contractors should monitor the air to determine the amount of airborne crystalline silica. And if respirators will be used, make sure they are used properly and in compliance with OSHA regulations.

California has taken control of dust exposure one step further. In October 2008, Cal OSHA adopted a new regulation requiring the use of water or vacuum dust control systems with the use of power tools when cutting, coring, drilling or grinding concrete or masonry materials, says Cal OSHA Division Chief Len Welsh. This allows Cal OSHA to cite for violating a specific regulation rather than a general standard. Welsh says the California reg is pragmatic and simple enough that other states may look to adopt it in the future.

OSHA and the Concrete Sawing and Drilling Association have formed an alliance to work together to provide information, guidance and access to training for contractors involved in concrete sawing and drilling. The alliance's goal is to help protect employees' health in the workplace. Minimizing employee exposure to silica dust is just one of the issues the alliance is working on educating contractors about.

In 2007, the alliance published its "Reducing Silica Exposure" fact sheet. To view the fact sheet and learn more about the alliance and what it does, go to www.osha.gov/dcsp/alliances/csda/csda.html.