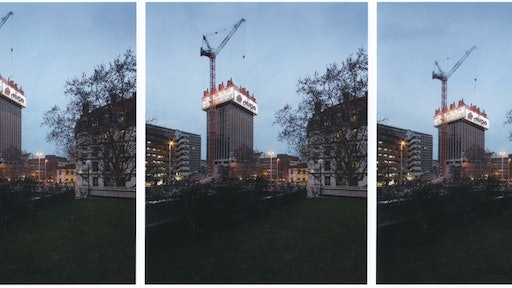 TopDownWay is a self-descending grid structure made of steel that works according to sound hydraulic principles and is controlled by an automated system that monitors movement and safety systems.

Developed by outgoing European Demolition Association President Giuseppe Panseri of Despe – one of Europe’s largest demolition companies – TopDownWay is an intelligent system that could revolutionize the demolition of high-rise buildings, according to its inventor.

The patented containment system isolates everything generated during the demolition process – glass, debris, rubble, noise, dust and vibrations – thereby protecting both the workforce and general public.  It is also a major improvement over traditional scaffolding systems, which can take three times longer to assemble than the TopDownWay system.

The TopDownWay system can be fully assembled in approximately 20 days and is immediately operational.  According to Panseri, it is a major improvement over the erection of traditional scaffolding, which could take up to three times longer to assemble and months more to demolish the structure.

TopDownWay is a self-descending grid structure made of steel that works according to sound hydraulic principles and is controlled by an automated system that monitors movement and safety systems.  It is assembled on the ground.  Its load-bearing components, which are mounted directly on top of the high-rise structure, and the system’s bridge modules, which are suspended from the load-bearing parts, are hoisted by crane to the top of the skyscraper being demolished.

The shape of the modular TopDownWay system can be adapted to the shape of any high-rise building. It enables demolition work, including interior strip out, floor-by-floor dismantlement and safe debris removal.

As the works proceeds, the TopDownWay platform descends in a controlled manner and positions itself on the next floor down. The skyscraper is demolished floor-by-floor until ground level is reached.

The system allows for the protection of the demolition workforce, providing a safe, enclosed work area. It allows for the isolation of the high-rise and contains within the structure everything generated during the strip-out or dismantlement.

There are no gaps between the skyscraper and the TopDownWay platform, guaranteeing that no rubble or debris will escape. A side benefit of Despe’s system is that the platform can be used for advertising messages, a perfect way for a demolition contractor to market its high-rise demolition skills.

Despe’s management sees great opportunity in the global market for TopDownWay, positioning it as a 21st Century engineering method to provide safe, time-sensitive demolition of high-rise structures.  The system was designed at Despe’s headquarters in Torre De Roveri in the Bergamo province of Italy.